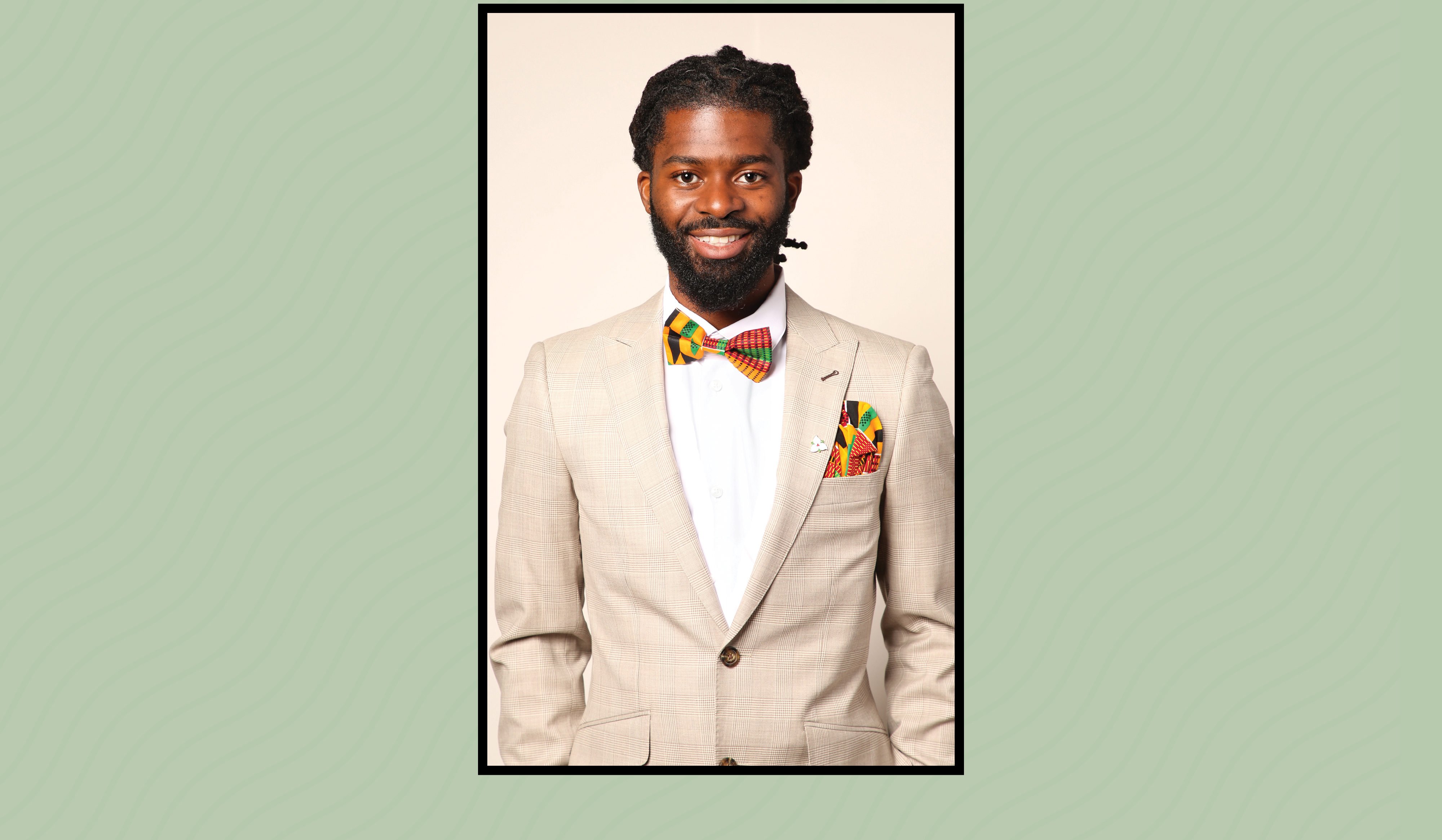 “When you’re born to do something, I don’t think anything or anyone can hold you back from your destiny.”

“It’s been a journey,” Adjei reflects. “It’s been about facing adversity, intimately, and finding different avenues to overcome it.” Adjei is frank in divulging the hardships woven into his story, highlighting several arrests in his youth and also the alarming and pivotal time when he was jumped and mugged shortly after being named valedictorian of his high school and graduating as an Ontario Scholar. Adjei has been able to ultimately find a centre, and a purpose, through writing about these instances of upheaval. “When you’re born to do something, I don’t think anything or anyone can hold you back from your destiny.”

He identifies that one of the most crucial points in finding his path to healing and harmony through poetry came after switching schools in grade eight, upon which a new teacher revealed the magic of the medium to an impressionable Adjei. “It was an eye-opening experience,” he recalls. “[Poetry] gave me the opportunity to reflect on where I’d been, and what I was dealing with.”

Adjei says that “he picked up and put down” the pen several times before it became his chosen avenue for change in both his life, and the lives of others. “I went from poetry to basketball,” he says. But not making the team in grade 11 pointed Adjei towards advocacy instead, and during a trip to an event hosted by the National Society of Black Engineers, during which writer and spoken word artist Boonaa Mohammed performed, Adjei was once again lured in by the pull of poetry. “I wrote my first spoken word piece right after that,” he notes.

It was another instance of seeing poetry performed live that sparked the idea within Adjei to pursue encouraging this potential in others. After attending a spoken word event at a church in Brampton, he was inspired to create an organization — one that was non-religious in its atmosphere and founded in his home base of Scarborough — that allowed young people to revel in the self-awareness, personal expression and sense of community central to creative practice.

Highlighting that it was hard to get the project off the ground because of a lack of resources, and even discouragement from some people in his inner circle, Adjei reflects on the experience with a sage outlook. “When you’re walking in your purpose, you end up in places you’re meant to be.” In this case, a trip to a youth resource centre to photocopy his resume ended up being a date with destiny for Adjei; while there, he struck up a conversation with an employee who, after hearing his idea for this creative education outlet, said that the centre was looking to start something similar itself.

After a few more months of planning, R.I.S.E. kicked off with promise in the spring of 2012; only a few months later, the deadly Danzig Street shooting occurred at a block party in Scarborough’s West Hill neighbourhood. “Three girls told me that they were going to go to the barbecue that day, but had come to R.I.S.E. instead,” Adjei says. “It opened my eyes to see that we had something special, and that we had to continue because when we [called it] a ‘safe space’, it wasn’t just the space itself that was safe. It was also preventing people from being in danger.”

Speaking of spaces, Adjei goes on to muse about the realm of social media — undoubtedly the social sphere of choice for many involved in R.I.S.E. — and its impact on youth mental health. “I don’t remember young people speaking about [mental health] the way they are now,” he says. “On one hand, I think it’s beautiful because they’re more cognizant of why they’re feeling what they’re feeling. It wasn’t something we were talking about when I was that age. On the other hand, there’s social media — more and more, the concept of identity is based on the norm of how others see you online; your perception of yourself is based on someone else’s ability to press a button.”

This assertion brings to mind one of Adjei’s poetic works, “The Dash,” the central theme of which explores what happens in the time conveyed by the dash on one’s tombstone. “It’s easy for us to think we’re just here, that we’re just existing,” he says. “I think there’s a huge difference between living and existing. To merely exist is to scratch the surface of our potential. [The poem] highlights that we all have an opportunity to do something with our lives while we’re here; and this is something that I always share with young people — the idea of carving out the dash you’ll be remembered by and for.”

In addition to being remembered for founding R.I.S.E. and publishing his first poetry anthology, I Am Not My Struggles, in 2018, Adjei will also of course be known for becoming the inaugural Poet Laureate for Canada’s most populated province; and the designation has stirred many feelings within him.

“Something that I live by is [the idea that] to find yourself is to lose yourself in the service of others,” he says. “Stepping back and realizing that I’ve done a lot in this time frame, I feel elated and grateful. I’ve gained a clear sense of self through my work. And I can see how this accolade is not only going to continue to serve me but to help other creatives, elevating their profile and advocating for their art.” He also points to the significance of someone from Scarborough receiving such a prestigious nod. “There are so many people doing great work in Scarborough. It sucks that we’re [often] the last to get noticed. But it’s changing,” he says optimistically.

To receive the title from members of the provincial parliament last month, Adjei chose to wear a Glen plaid suit, custom-made from Indochino — “My first custom suit,” he notes — with a bow tie and pocket square from Ghana fashioned from Kente. “The cloth is a big part of our tradition,” he says. “For a long time, I ran away from who I was, and being Ghanaian. Right now, being African is the coolest thing but as a kid I would be made fun of, even by people’s parents. It was scarring.” Adjei’s stylistic choice on such a momentous day reflects his current attitude of confidence and assuredness. “I wanted to represent who I am. [And] there are so many aspects to who I am; this [outfit] brought them together.”

A scroll through Adjei’s Instagram highlights many other attention-getting looks, including a tasseled tunic his friend, stylist Motaniel Ngina, dressed him in for an interview with the business organization Black Execs. Perhaps one of the most potent garments seen on his feed is a sweatshirt from the brand Live It Wear It, which has the words “Property of Black Power 1968” emblazoned on it; the date commemorates when Olympic athletes Tommie Smith and John Carlos boldly raised their fists in a salute during the national anthem while on the award podium at the games in Mexico.

“It was an iconic moment,” Adjei says. “[The sweatshirt] reminds folks that at the end of the day, we’ve overcome so much. And it’s a talking point — it’s meant to be provocative in a way.” Given the challenging and inspirational nature of all the facets of Adjei’s work, it’s an apt sartorial moment that we’re sure to see more of throughout his career.

Al Roker Misses Thanksgiving Day Parade, Watches from Home After Hospital Stay
5 Simple Ways to Earn Social Proof as a Young Entrepreneur
How to Increase Your Sales by Analyzing Your Marketing Funnel
How This Activist Is Empowering the Voices of Young Muslim Women
Fed Up With Red Tape? Here Are 3 Tactics to Advance Your Marketing Strategy and Stay On The Right Side of Regulators.