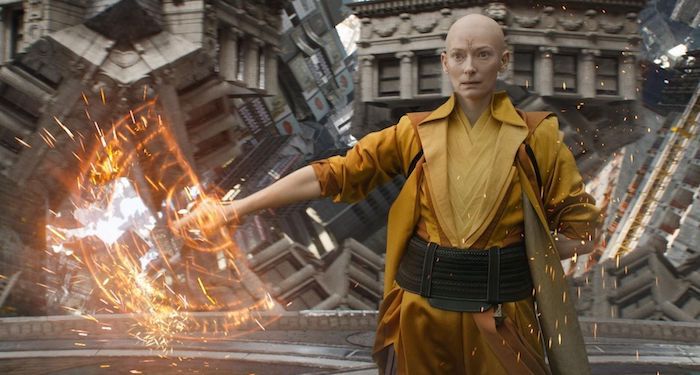 The U.S. is a lot more diversity-conscious today than we were back when our most beloved comic book characters were created. As a result, without intervention from modern showrunners, superhero adaptations would continue to reflect the dubious morals of bygone eras. Sometimes, this intervention results in the creation of new characters of color, like Arrow‘s John Diggle. And sometimes, showrunners hire actors of color to portray traditionally white characters. This latter practice is called racebending.

Racebending is not new, either with respect to superheroes or in general. For this article, however, I specifically sought to satisfy my curiosity with regards to racebending in superhero adaptations. I went into the project with some vague hypotheses — for instance, I figured that most racebent characters would start out white and end up Black — but mostly I just really wanted to make a spreadsheet.

What did my lovely, color-coded spreadsheet tell me? Grab a drink and keep scrolling to find out! And please note that all percentages are rounded to the nearest hundredth.

Characters from the past twenty years: I didn’t want to get overwhelmed, so I only stuck with movies and TV/streaming shows from 2001 to the present. I figure that since many superhero franchises (especially Marvel’s) rose to real prominence within that timeframe, these two decades would provide the most (and most useful) data anyway.

The Stack Newsletter
Sign up to The Stack to receive Book Riot Comic’s best posts, picked for you.
Thank you for signing up! Keep an eye on your inbox.

A mishmash of characters: Basically, I worked from my memories of the shows I’ve seen, supplemented by information from Wikipedia. I included whichever characters sprang to mind first and stopped when I hit 37, which seemed like a big enough number to provide some interesting data. I did not include every single racebent character, but I hope I included enough to give a representative picture of the state of racebending in superhero adaptations.

Nick Fury: The main comics version of Fury started out as white and has been so for most of his existence, but a Black Fury did exist in the Ultimates universe before Samuel L. Jackson was cast. (For added confusion, Ultimates Fury was visually based on Jackson.) So, while you could make a convincing argument that this is an example of comic-to-comic racebending rather then comic-to-adaptation racebending, I chose to include him anyway.

Aliens: Because we’re talking about superheroes, I had to take into account non-human-passing characters being played by humans. Obviously, such characters are inherently racebent (well, species-bent), so how to quantify them?

I created a separate “Alien” category under Original Race. For all intents and purposes, however, I treated “Alien” the same way I did “White.” This is because of the backlash actors like Anna Diop (Starfire, Titans) get for being cast as alien superheroes. Clearly, fans (or at least a certain subset of fans) read alien characters as white until forced to reconsider. It therefore seemed most valuable to count all instances of non-white actors playing non-human-passing aliens as examples of racebending.

I made an exception for shapeshifting aliens like the Martian Manhunter and Miss Martian, who have the capacity to pass for human. In the comics, both chose to appear as white; in Smallville and Supergirl, they appeared as Black (played by Phil Morris, David Harewood, and Sharon Leal). So I listed their Original Race as “White.”

What I Did Not Include

Characters with no comic book equivalent: This is why I excluded 2004’s Catwoman. Halle Berry may have been playing a Black Catwoman, but the character behind the mask — Patience Phillips — bore no resemblance to Selina Kyle or any other established Catwoman. Because her character was created especially for the film, she couldn’t possibly be a racebent version of anybody.

Characters from shows that aren’t out yet: This is why I excluded Jordan Fisher, who has been cast as Bart Allen on The Flash. His episodes haven’t aired yet, so I didn’t include him or anyone else whose film or TV show hasn’t been released.

Detailed racial breakdowns: Breaking news: race is complicated. As a result, I had to oversimplify the categories. For instance, I only had one category for “Latinx,” even though that’s not a race and includes people from different racial groups. I also included Romani characters in the “Asian” category, since they are part of the South Asian diaspora. I am aware that the situation in both cases is often more complicated than that.

I had special trouble with the “Latinx” category. Theoretically, I could have included everyone from Zoe Saldana (Gamora, Guardians of the Galaxy), who is Black and Latina, to Joaquin Phoenix (the Joker, Joker), who is Puerto Rican but of entirely white and Jewish ancestry. For most Latinx actors, I have no idea what their racial make-up is like, and I didn’t want to guess based on appearance.

So I gave up. I counted Saldana and Zabryna Guevara (Sarah Essen, Gotham) towards the total of both “Black” and “Latinx” characters in the New Race category, and I decided to exclude Phoenix entirely. All other Latinx actors were marked as “Latinx” only. This is the best I could do, short of scouring interviews to try to find out how every actor self-identifies.

Data about anything besides race: For the purposes of this article, I only recorded how a character’s race changed. So the Ancient One (Tilda Swinton, Doctor Strange) is included because he went from Asian to white; the fact that he also went from male to female is irrelevant here.

What I Found Out

White characters are most likely to be racebent: Of the 37 characters I included for analysis, the vast majority — 24 characters, or 65% — had “White” as their Original Race. If you add in the four non-human-passing aliens (Abin Sur, Green Lantern; Gamora and Drax, Guardians of the Galaxy; and Starfire, Titans), that percentage increases to 76%. This is good news, but it also means that nearly a quarter of all racebent characters remove diversity either by whitewashing (taking a character of color and making them white) or by otherwise casting an actor who does not share the character’s ethnicity.

Racebent Latinx characters are almost always bad guys: Most characters who go from “White” to “Latinx” are villains. This includes established foes like Deathstroke (Esai Morales Jr., Titans) as well as Jasper Sitwell (Maximiliano Hernández, Agents of S.H.I.E.L.D.), who wasn’t a villain in the comic at all! Even Gamora, who occasionally does heroic things, is hardly a role model.

The lone exception was Sarah Essen from Gotham.

The only other example of whitewashing involved a Middle Eastern character: Ra’s Al Ghul (Liam Neeson, Batman Begins). Then there’s the unique case of the Egyptian Apocalypse (X-Men: Apocalypse), portrayed by the Guatemalan Oscar Isaac. This latter example is a weird echo of Ricardo Montalbán’s casting as Khan in the Star Trek franchise. Apparently, the logic is that non-white people are interchangeable. The fact that Apocalypse barely even looks human probably added to showrunners’ sense that proper representation didn’t matter here.

What It All Means

Diversify your diversity: It’s clear that, for many productions, adding diversity means adding Black characters. While we should certainly keep increasing the number of Black voices in superhero adaptations, those should not be the only voices elevated. The proliferation of white-to-Black racebending indicates that showrunners think “Black” equals “diverse,” and that they continue to undervalue Latinx, Asian, Middle Eastern, and Native American representation.

Let racebent Latinx characters be good: There’s already a lot of negative stereotypes about Latinx people being drug dealers, murderers, rapists, and practically every other type of crook. We don’t need this.

Cast Asian actors as Asian characters: The fact that whitewashing affected Asian representation almost exclusively indicates a particular disrespect for Asian characters. In retrospect, I should not have been surprised. While I hesitate to apply my results to other franchises, the terrible casting decisions in Ghost in the Shell and Star Trek: Into Darkness hint at a wider trend.

Romani =/= white!!: Unlike other Asian characters, who are at least sometimes portrayed by Asian actors and have even gained representation through racebending — Jason Momoa’s Aquaman being a prominent example — the Romani characters are never portrayed by Romani actors and never benefit from racebending. Even in the comics, you’d be hard-pressed to find a respectful reference to these characters’ heritage.

This is unacceptable and must change immediately. If DC and Marvel can dump all that money into digitally shaving and de-aging their actors, they can spare a few bucks to educate themselves on how to properly represent their own characters.

I didn’t include data on the number of racebent heroes vs. civilians vs. villains, but aside from the weird blip with the Latinx characters, there appears to be a healthy mix. From the heroic Kid Flash (Keiynan Lonsdale, The Flash) to the villainous Maxwell Lord (Pedro Pascal, Wonder Woman 1984); from helpful civilians like Pete Ross (Sam Jones III, Smallville) to deeply flawed parents like Catherine Hamilton (Elizabeth Anweis, Batwoman); from appearing in enjoyable programs (Jurnee Smollet-Bell/Black Canary, Birds of Prey) to execrable ones (Michael B. Jordan/the Human Torch, Fant4stic) and everywhere in between, characters of color are finally leaving their mark on a genre from which they were long excluded.