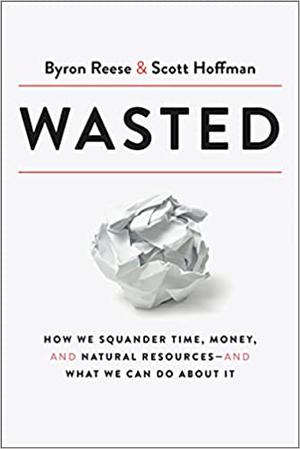 An overview of waste in its myriad forms.

Every year, the total amount of gas spilled at the pump equals that of the Exxon Valdez disaster. The asteroid 16 Psyche, between Jupiter and Saturn, contains a variety of metals valued at around $700 quintillion. Online orders are returned 30% of the time. “Sixty percent of the world is still without indoor toilets, while Americans spend half a billion dollars a year on Halloween costumes…for their pets.” Such intriguing facts are thick on the ground in this collaboration between Reese, a tech entrepreneur, and Hoffman, a literary agent. As the authors write, waste is undesirable, incurs a net negative cost, and can be avoided; that definition is roomy enough to encompass water, plastic, gold, food, electricity, money, time, and human potential. “No one wants to waste,” they write, and many work hard to avoid it, “but the world is full of well-meaning attempts to avoid waste that actually cause more waste than they prevent.” Most of the book is lively and humorous, though the chapters on wasting energy and natural resources are more scientific than the rest. “If the planet’s carbon system is generally in balance without human activity, why don’t the 40 gigatons humans emit each year stay in the atmosphere—or [be] reabsorbed, the way naturally produced CO2 is?” Though the authors suggest that “astute readers” may be wondering this, some may have checked out already. The final section, “The Philosophy of Waste,” considers more abstract quantities, creating an abrupt transition in a book that could have used a little more smoothing around the edges. Still, the anecdotes are often amusing. For example, a hedge fund manager once paid Kenny Rogers $4 million to play “The Gambler” over and over at a party. He was later convicted of fraud, fined, and imprisoned. “Evidently,” write the authors, “he knew neither when to walk away nor when to run.”

If no clear thesis or mandate about waste emerges, the collection of amazing factoids makes for entertaining reading.

MY BEAUTIFUL VOICE
The Key Elements All Online Communities Should Have
Can Any Workout Shoe Really Do It All? Lululemon’s Chargefeel Gets Damn Close
9 Graphic Novels and Memoirs That Meet This Moment
Broadway Hits Withstand Summer Heat As Others Sweat It Out; ‘MJ’ Sets House Record