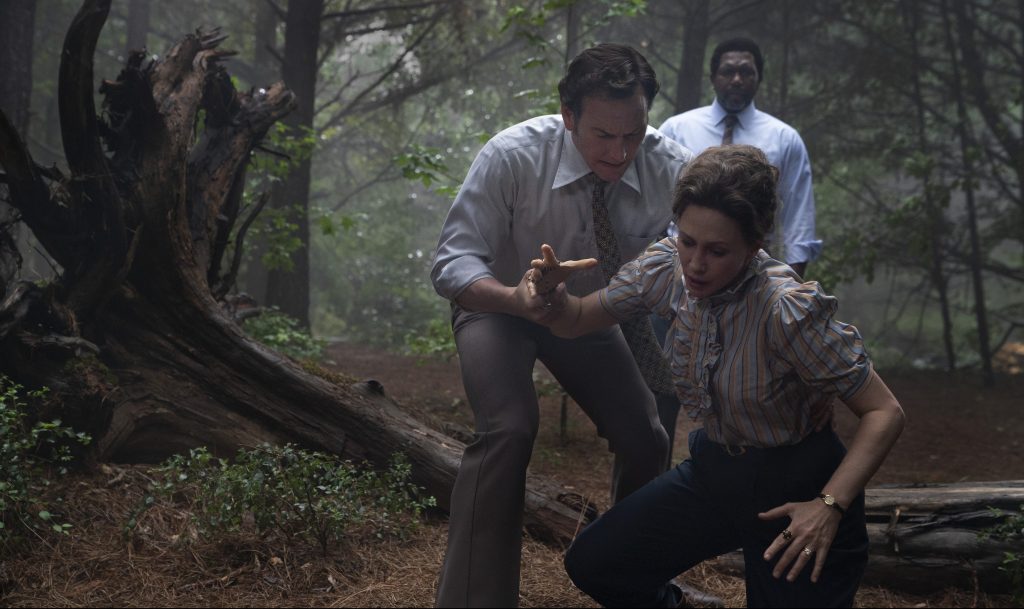 Saturday AM: Refresh for updates New Line’s The Conjuring: The Devil Made Me Do It is beating Paramount’s second weekend of A Quiet Place Part II, with an estimated $23.5M+ to $22M but there shouldn’t be any doubts: It’s a solid weekend at the box office, especially as the pandemic calms. Even No. 3 title, Disney’s Cruella is doing well, on its way toward a $11.4M second weekend, -47%, after a $3.28M Friday, -57%.

By the end of the summer, I’m sure there will be countless pieces written about whether this availability of a film in the home and in theaters at the same time is good or not for the business; remember making clean copies of these available on the web subjects these films to piracy. Conjuring 3 is playing for free to HBO Max subscribers, while Cruella is available to Disney+ premier subscribers at $29.99. What’s clear this weekend, is that there’s a theatrical appetite by audiences, and the abundance of product at the multiplex makes for great business.

In the wake of A Quiet Place 2 and Cruella‘s success last weekend, Paramount and Disney respectively made headlines on Friday afternoon, the Melrose lot dating the genre pic’s follow-up movie from Jeff Nichols for March 31, 2023 and the latter announcing that a sequel to the Emma Stone feature is already in the works with original pic’s director Craig Gillespie and scriber Tony McNamara.

Meanwhile, the weekend’s second wide entry, Universal’s DreamWorks Animation’s sequel Spirit Untamed made an estimated $2.4M yesterday at 3,211 theaters for what looks to be a $7M 3-day in fourth place. CinemaScore audiences gave the movie an A. Fifth place belongs to United Artists Releasing/MGM/Miramax’s 5th weekend of Wrath of Man which grossed $335K yesterday (-38%) for a projected 3-day of $1.2M, -44%, for a $24.6M running total.

Out all of the films in the Conjuring franchise, including spinoffs Nun and the Annabelle trilogy, Conjuring 3 has posted the second lowest opening in the series, ahead of 2019’s Annabelle Comes Home which did $20.2M over its Friday-Sunday, and $31.1M. Like with any horror franchise, one can argue fatigue, however, New Line kept the production budget low on the latest Ed and Lorraine Warren paranormal escapade at an estimated $40M. Conjuring 3 earned a B+, which is a notch below the A- grades of Conjuring 1 and 2, but higher than any of the Annabelles (which did in order B, B, B-) and much higher than The Nun, which even at a C CinemaScore boasts the biggest opening in the James Wan and Peter Safran produced franchise.

Comscore/Screen Engine PostTrak scores weren’t far behind CinemaScore’s for Conjuring 3 with a 78% positive score and 58% definite recommend with the crowd leaning female at 53%, 56% under 25 with 61% between 18-34 years old. Diversity demos were great across the board with 34% Hispanic, 29% Caucasian, 23% Black, & 14% Asian/other. Best parts of the country for the Michael Chaves-directed threequel was West and Southwest. I hear Imax and PLF drove over 20% of Friday’s business for Conjuring 3, which didn’t have any Thursday night previews rolled in.