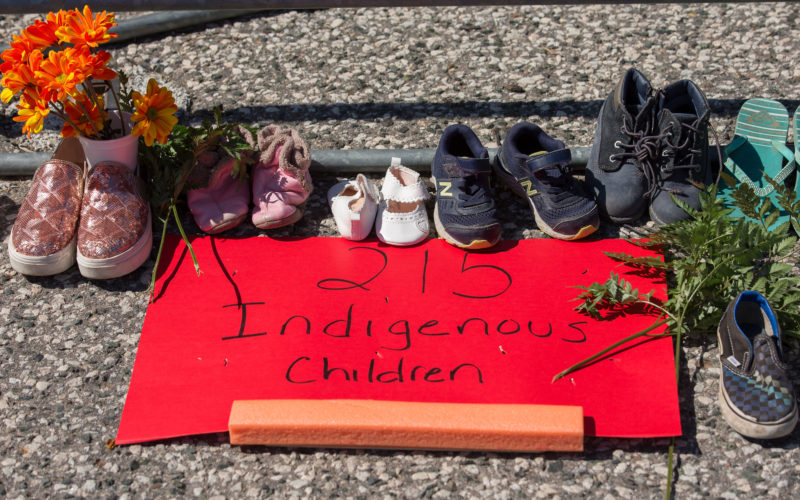 Many Canadians are just waking up to the truth Indigenous peoples have long known about Canada’s residential school system. It’s time to do the work.

Last Friday, the Tk’emlúps te Secwépemc First Nation announced that 215 bodies had been discovered in a mass grave on the grounds of the former Kamloops Residential School in British Columbia, believed to be the undocumented remains of Indigenous children killed while attending the institution, which was open between 1890 and 1969.

It was a horrifying and painful reminder of a chapter in Canada’s recent history that our national narrative has worked hard to repress — or at the very least, pretend is in the past, and not living on in the way our government continues to treat Indigenous peoples. (See: the disproportionate number of Indigenous children in foster care, or the lack of clean drinking water on many reserves.) For residential school survivors or their descendants, it’s re-triggered trauma. For non-Indigenous Canadians, it has moved many of us: to reflection, to shame, and to a desire to do something with those feelings.

While the work of reconciliation is much more than reading a few books or making a one-off donation, here are five practical ways for how to support Indigenous peoples and start our national work of addressing — and healing from — the genocide in Canada’s closet.

If you’re like many of us, residential schools weren’t on your school curriculum growing up, and you might be embarrassed by how little you know about them now. (Like the fact that the last residential school only closed in 1996? Yeah, that.) Part of allyship is educating yourself, and not relying on your Indigenous friends to do that emotional labour for you, which can be triggering and re-traumatizing. Here are a few resources to get you started.

They Came for the Children

In 2011, Canada concluded a truth and reconciliation commission into residential schools, and you can read the full report into their findings. Based on historical documents and survivor testimonies, it’s a comprehensive (although by no means exhaustive) primer on the commission’s appalling, heartbreaking investigation.

Winner of the Governor General’s Literary Award, this novel tells the story of five children at a residential school in British Columbia, interweaving the stories of their lives as they attempt to heal from their experiences years later.

The Inconvenient Indian: A Curious Account of Native People in North America by Thomas King

Written by one of Canada’s greatest literary talents, this is an unconventional half rumination, half history of Indigenous identity since the first European settlers arrived on the continent. If you’re looking for perceptive context and a sweeping survey of 500 years of history, this is an accessible way to do it.

These are the first-person recollections of students who attended this Manitoba residential high school, open between 1958 and 1973. It’s a difficult read, but an important one as we all work to honour (and believe!) the testimonies of the people affected by this heinous system.

If you’re looking for ways to talk to kids about residential schools, start with this picture book by a residential school survivor, which begins when she has to give up an orange shirt her grandmother gives her when she arrives at school, a metaphor for the systematic stripping of her Indigenous culture and language conducted there. This story, by the way, inspired Orange Shirt Day, held every September 30 to keep the conversation around residential schools going.

Write to your elected representatives

When the Truth and Reconciliation Commission published its report in 2015, it issued 94 “calls-to-action,” practical ways governments could act to deal with the ongoing legacy of the residential schools. Five years later, according to the Yellowhead Institute, just EIGHT of those have been implemented. Write to all your elected officials — municipal, provincial, federal — and put pressure on them to honour the remaining 86. (You’ll find all their contact information on their individual websites.) When it’s time to vote, make sure you’re casting a ballot for politicians who commit to making reconciliation a priority.

For a very long time, Indigenous people have not been believed when talked about what happened at residential schools. As we learn more and more about things Indigenous communities have known all along, make it a priority to centre their stories and teaching as you educate yourself — not just about residential schools, but so many other facets of Indigenous identity.

This Iñupiaq creator’s Instagram and TikTok chronicle life and celebrates her family’s culture in Canada’s Arctic.

Indigenous Baddie on TikTok, this Néhinaw creator has spun up some powerful, punchy videos tackling the specific subject of residential schools.

If you can, put your money where your allyship is, and donate to organizations that are actively supporting survivors of the residential school system. Here are two options for how to support Indigenous peoples through direct donations:

For over twenty years, this charity has been providing counselling and mental health support, including offering a 24/7 crisis line.

Modelled after a “grandmother’s lodge,” this Indigenous women-run charity works to enact political change, including creating an action plan to end the ongoing violence against Indigenous women, detailed in the recent inquiry into missing and murdered women and girls.

Understand your own role in all this

If you’re a non-Indigenous Canadian, you are a settler on land that first belonged to Indigenous people. Even if you’re newer to Canada, or your family wasn’t living here when the residential school system was in place, you have a role to play in reconciliation, and making sure that the systemic prejudice the institutions represented isn’t perpetuated in other forms. Keep doing the work, don’t centre your own feelings in this conversation, listen to Indigenous people when they choose to speak — and don’t forget to amplify and celebrate their excellence and success too.