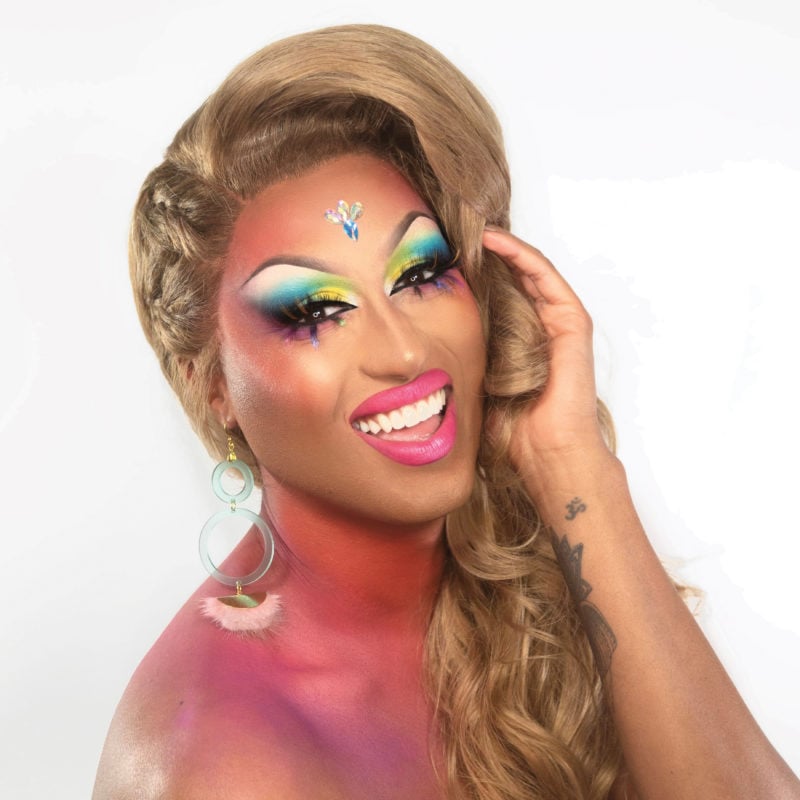 “I used to paint for the stage and just do the stagiest of stage makeup. My eye was the size of my forehead. These days, we drag performers have had to really fine-tune our blending.”

If you watched the first season of Canada’s Drag Race, then you know there’s never a dull moment with season 1 winner Priyanka. The Toronto-based drag queen is a ball of energy and laughs, which makes her the perfect person to team up with Quo Beauty this year to celebrate the beauty brand’s new Pride 2021 collection.

Below, we chat with Priyanka about her plans for Pride this year, what life has been like since winning Drag Race, and that time her makeup had her “looking like a turkey” (her words, not ours).

On life after winning Drag Race

“The amount of things that I’ve been able to achieve in the last year has been incredible. I’m releasing an album in the summer and I just released an iconic music video for my first single off that album, called Cake. I feel so proud and happy that all my hard work is finally paying off.”

“I definitely think that if the world was open, I’d be traveling a lot more and there’d be more eyeballs on me, because drag for me is so much about live performances. But right now it’s switched to more pre-recorded music videos, which is also so beautiful because we get to express ourselves in a different way.

“So of course I wish that I won Canada’s Drag Race when the pandemic wasn’t happening, but it was also great because I got to spend it with the people who really support me since I wasn’t traveling. I got to do every viewing party with my mom and my best friends. It’s been bittersweet.”

“My makeup has completely changed. I used to paint for the stage and just do the stagiest of stage makeup. My eye was the size of my forehead [laughs]. These days, we drag performers have had to really fine-tune our blending. Everything is smaller for on-camera looks. It’s really teaching us how to paint for different occasions.”

On her partnership with Quo Beauty

“Well, Priyanka is on fire right now. There’s full global domination happening with me being the first-ever winner of Canada’s Drag Race. Also just being an icon, that helps, too. I was already obsessed with Quo products because they’re a staple in the drag community so it was a no brainer for me.

“Their brushes especially are so good. Brushes are something that can get quite pricey but the Quo ones are very well-priced and accessible. Your girl gets forgetful sometimes, so she can run to the local Shoppers Drug Mart and quickly pick up some brushes. It’s always nice to have great makeup that’s accessible.”

On the standout product in Quo Beauty’s Pride collection

“I love the Velvet Kiss Liquid Lipstick in Gumdrop because it’s the same as my go-to drag colour that I had lost a few years ago. I was lost without it, and now I’ve found that same shade with Quo.”

“I’ll be right here on the on Zoom calls doing performances, planning the release of my album and planning my next music video.”

On her first-ever Pride makeup look

“The first time I ever went to Pride, like five or six years ago, I remember being so overwhelmed. I couldn’t believe I’d never celebrated it before. I remember being on Church Street in Toronto, walking past somebody and they had some glitter and I was like, ‘Do you mind putting some glitter on me?’ and they put some on my cheekbones and I felt like I was the only girl in the world. I’d never even done my makeup at that point and I felt incredible.”

On the longest a makeup look has ever taken her

“When I first did drag, like ever, I started to paint at 1 p.m. and the performance wasn’t until 11 p.m. I don’t even know what I did for 10 hours because when I was done I looked like a turkey. My makeup was so bad.

On her favourite Pride memory

“Performing a Bollywood medley at Toronto Pride when opening for Brooke Lynn Hytes in front of thousands of people and having my Instagram flooded with messages like ‘We’ve never seen a drag queen do a number like this on a mainstream Pride stage before’. I was so proud of myself.”