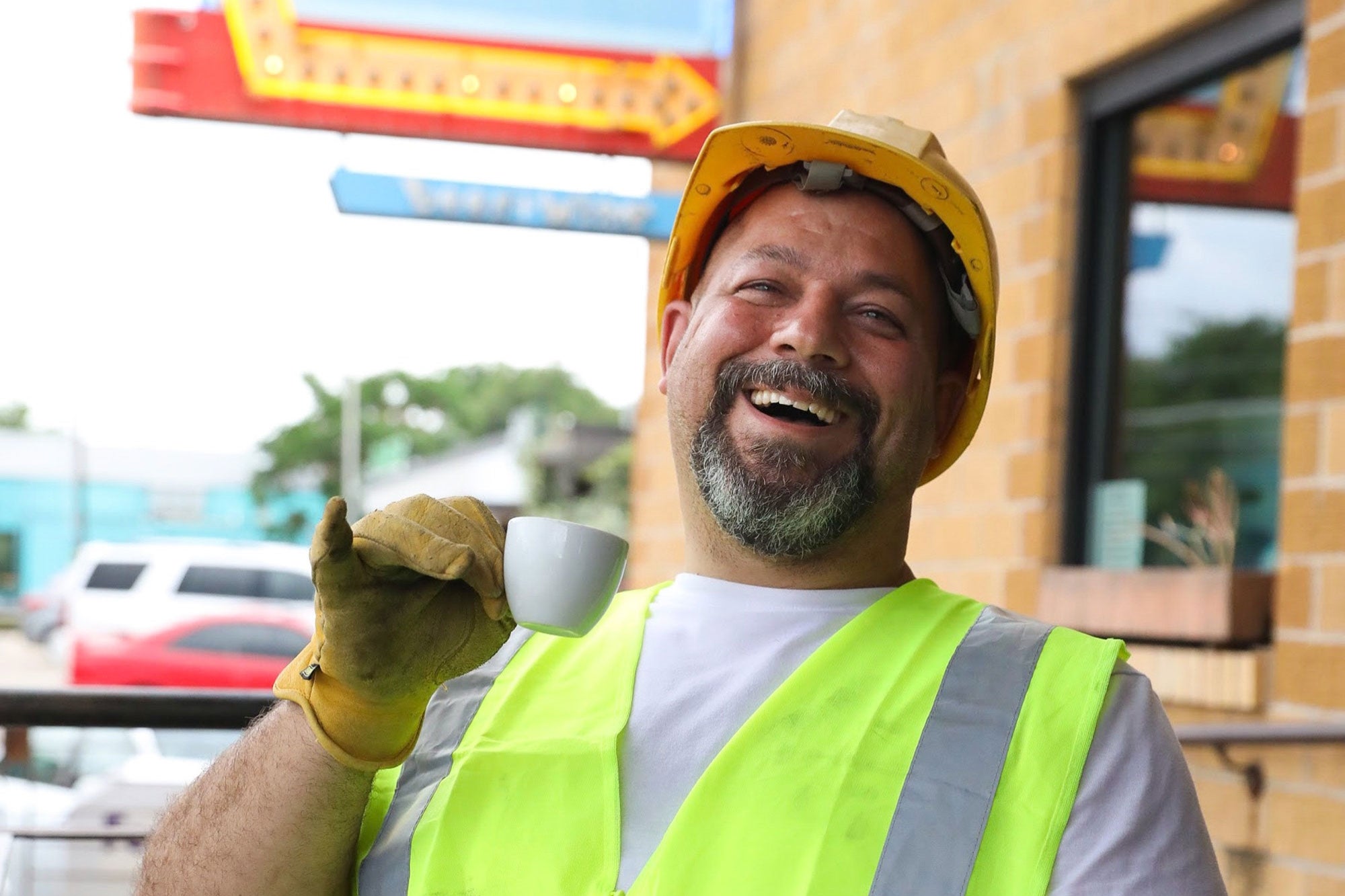 When @justaconstructionguy took off on Instagram, the account really took off. The story goes that a teenage girl (@barbzlovescarbs on Twitter) posted a screenshot of her dad’s new Instagram account in April of 2019, claiming he became an “influencer” to prove to her he could do it. He went from 75 followers to more than 400,000 in five days because the story behind it was fun to tell. The Instagram account was also clever.

Then the investigative hacks of the internet got hold of it and claimed it was a fake influencer set up by a coffee company and its agency. The whole thing was rigged. Followers of the account had been duped.

It turns out they hadn’t.

Omar, the real construction guy featured in the account, which satirically poked fun at influencer culture with “sponsored” content from a coffee company? He’s still the star of the account, which continues to crank out engaging content and sits just north of 415,000 followers. Omar expanded to TikTok last year. He’s got 220,000-plus followers there.

He is still a real construction guy.

Cuvee Coffee supported the launch of the project but fell off after a while. Omar and the agency that built the account with Cuvee are following through on the idea that a construction guy who digs coffee can be an influencer. 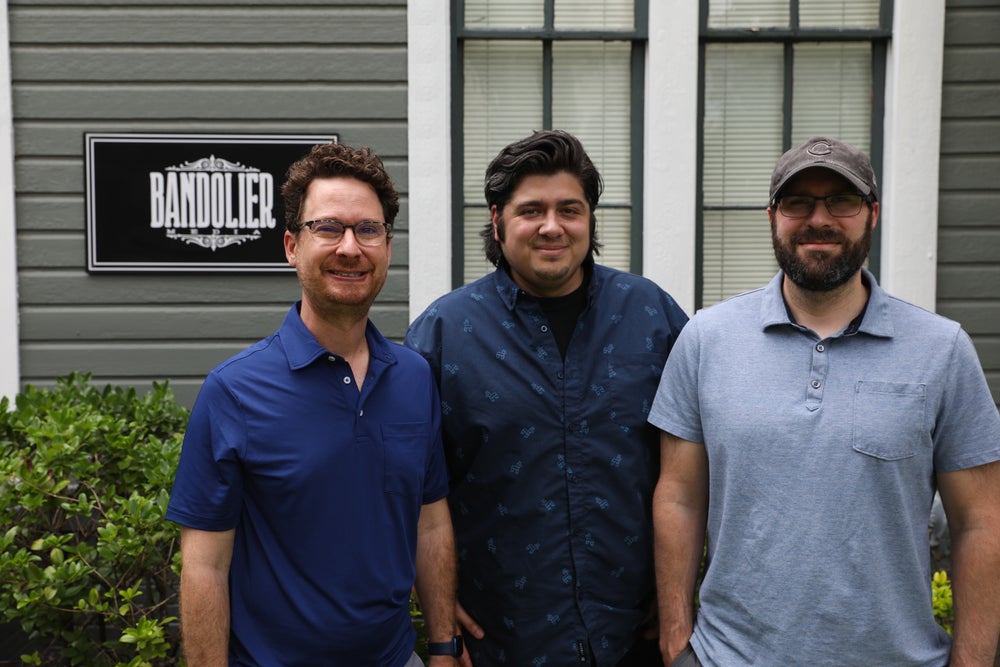 The agency was Bandolier Media. The Austin, Texas-based firm is made up of exactly four full-time people. It has won back-to-back regional recognition in AdAge’s Small Agency of the Year awards. And it might just be the most disruptive ad agency in America.

Social nedia is the media

You don’t win recognition as an advertising agency from AdAge without some substance to your work. The application for the publication’s Small Agency of the Year Award alone features layers of questions about clients, creative approach, growth and revenue. Bandolier has chops. But they aren’t traditional advertising-agency chops.

Lou Montemayor was the original co-owner and other half of Stone’s “we.” The pair worked for the same publishing company from 2010-’13. Stone noticed Montemayor’s talent for coming up with interesting ideas to execute via social media as he pitched concepts to the company’s leadership. They didn’t quite get it.

But Stone did. He snuck Montemayor’s idea binder away from the company, knowing one day they would have a chance to put some of the ideas into practice. A few years later, they collaborated on a silly song called “Beer Pong Anthem” with musician Thom Shepherd. Stone reached out to people hosting beer pong tournaments around the country and asked them to play it at the events, then post it on their social media pages.

Meanwhile, Montemayor created social media content to support the song’s momentum on Twitter, Instagram and a Facebook page. “I knew right then and there that brands would be interested in having someone set this up and do this kind of thing for them,” Stone said.

And that’s where the disruption began. The pair left their jobs in 2015 and bootstrapped Bandolier Media. Which is to say the two of them started pitching social media ideas to clients.

Not too far into their journey, Stone’s penchant for dad jokes helped launch Classic Dad, a satire-filled blog and novelty T-shirt shop. One concept, dad as the “lawn whisperer,” evolved into an original video series presented by Scott’s Lawn Care. It’s now in its fifth season.

Then there’s Duck Tape Man, whose borderline orgasmic reaction to the sound of duct tape peeling off the roll is hilarious enough to make people hit “Share” on a commercial.

“The main reason we think social-first is that our work relies on making a connection with the audience,” says George Ellis, who joined Bandolier as a co-owner and creative director in 2018. “While you can certainly do that with a TV commercial or other more traditional methods, it’s more critical in social, because people will respond and engage.”

There are lots of social media agencies out there, but not many advertising agencies that lead with social-media thinking. That’s what sets Bandolier apart. It creates interesting content on social-media channels that drives engagement and awareness around the brands they work with. The creative is strong enough that people want to talk about it and share it.

“That’s what we want,” Ellis explains. “The last thing we want for a client is to put out a piece of work that pretends to have all the answers or serves as a one-way communication. We want our brands to engage with people and spark conversations. That way, we all learn something or can take the dialogue in a different direction we never would’ve planned had we just created a traditional product spot or post about product benefits.”

Bandolier was originally two guys having fun creating content. In many ways, it still is. Ellis came to the firm after stints at larger agencies like Leo Burnett and Razorfish. A fourth employee, Kelsey Hickok, manages creative content across the client portfolio.

“I should be delegating and bringing on more people,” Stone admitts. “But we had to get lean with Covid and do everything. I cleaned the office, but was happy to do it. That’s part of being a business owner.”

Bandolier uses four to five sub-contractors and sources freelancers when the need arises. The actors in most of the videos? “Most of them are my neighbors,” Stone laughs.

“We’re really happy and we’re happy with each other, working together,” he adds. “We like to work, because we like the work.”

Stone and Montemayor laugh that everything about starting the business was just fun. From ordering checks and business cards to renting an office. In fact, their enthusiasm was so infectious, when they visited Nada Moo! Ice Cream’s facility looking for office space, CEO Daniel Nicholson hired them to do his company’s social media.

And while success continues to come, Stone cautions he’s not on easy street. “I still drive a crappy 2014 Subaru,” he shares. “It’s still a grind. But I feel happy and proud of the work.”

Unlike most advertising agencies, Bandolier’s growth has been focused on what they’re good at, not just taking every project that comes along. “We’re pretty good with RFPs and explaining to the client, ‘Look, we’re probably the worst person to hire for that,’” Stone explains. “’But we like what you’re doing and we have a great vision. Can we share with you the vision we have for this project?’”

Montemayor explained sticking to what they know and who they are may make them seem a little out of place, but that’s a welcome disruption in the agency world. “With our early clients, we were dealing with the owner, going out, having a beer and talking about what kind of crazy thing we were going to come up with,” he says. “Fast forward three years, four years and we’re there meeting with Shell Oil corporate — big, high executive people — and we’re the same. We’re not going to try to fit the part. We’re just going to be ourselves. That’s worked really well for us. People find it refreshing.”

Related: F*** You Pay Me Founder Lindsey Lee Knows People Are Tired of ‘Accepting Less Than You’re Worth’

A unique spin on influence

The case study with @justaconstructionguy is a rather serendipitous example of the refreshing approach Bandolier brings to the table. Stone and Montemayor concepted the idea with Cuvee Coffee owner Mike McKim, who was delighted workers from local construction sites were coming in for coffee on their lunch breaks. The juxtaposition of grizzled, blue-collar guys enjoying craft, but not pretentious, coffee struck a chord.

“Why not also juxtapose what it meant to be an influencer?” Montemayor said.

While Omar (yes, that’s his real name) did have the conversation with his daughter, bragging he was now an influencer, Bandolier morphed the conversation into the now famous Tweet in a moment of genius.

“We needed something to explain why the account was there,” Montemayor explained. The move was a stroke of genius because it created a reason for people to share the account, which led to its massive growth.

Omar is real and all of the content is that which he has a say-so in, but Bandolier drives the ship, using him in the role of model and actor as much as supporting his own direction for the project.

It turns out Bandolier is showing there are more ways to create influence than finding someone who already has it. You can manufacture not just influence, but influencers. The difference is approaching the influence channel as if it is a creative palette.

“There’s nothing wrong with hiring an influencer. We do it all the time for our clients,” Ellis said. “But if you lock yourself into that thinking, then it’s basically shutting off a whole avenue of creativity. Sometimes to create something new on social, you have to actually start at the beginning: with a new personality or property.”

The Best Books of the Year, According to Oprah Daily
‘GMA’ Hosts T.J. Holmes and Amy Robach Joke About Relationship on Air
More than 150 Literary Agents Sign Letter to Support HarperCollins Workers’ Strike
AIN’T BUT A FEW OF US
11 Punny Mugs for Language Lovers