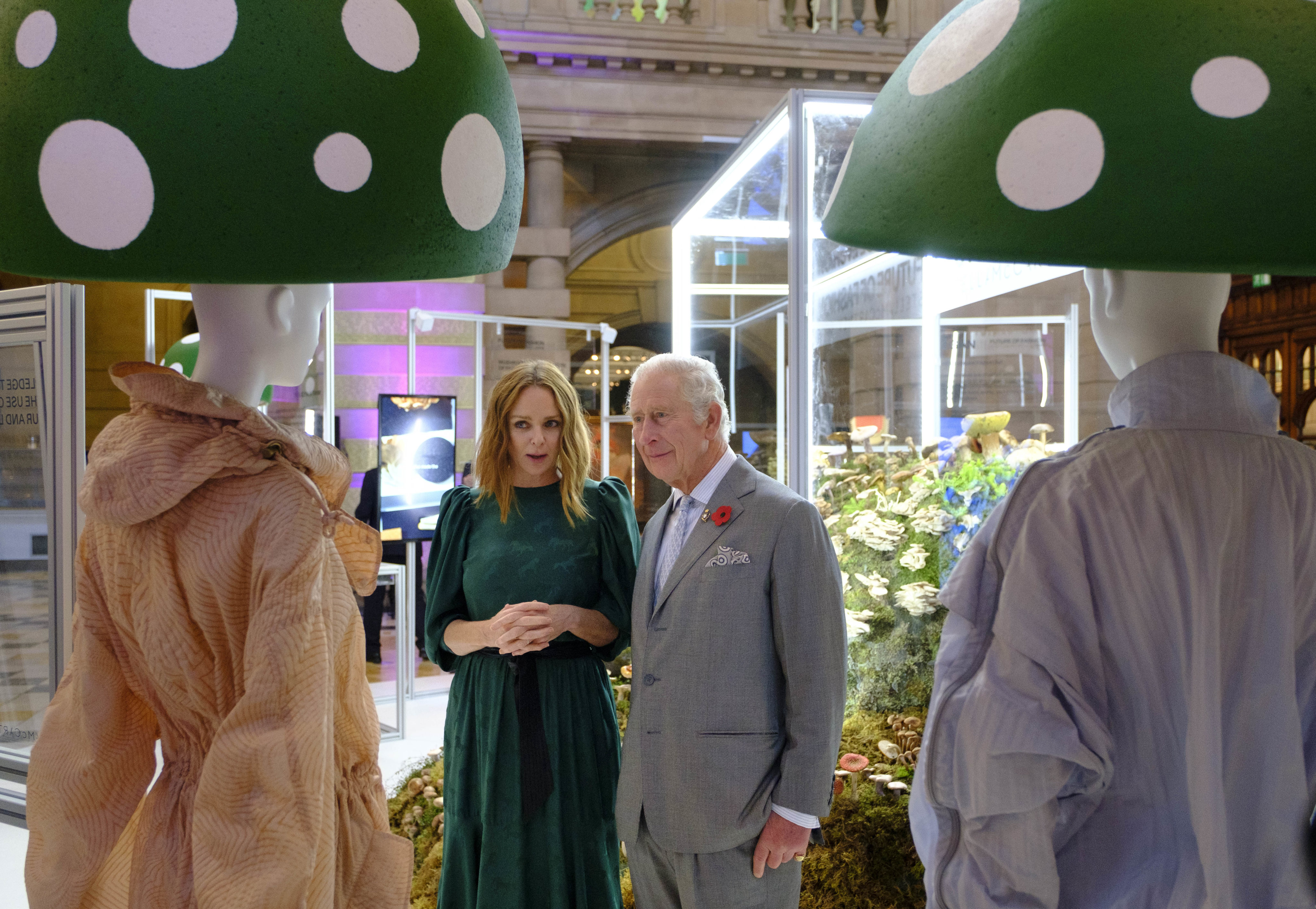 “To not collaborate now would be an injustice.”

The United Nations Climate Change Conference (COP26) commenced in Glasgow this week as international leaders face mounting pressure to unearth solutions to the fashion industry’s role in the climate crisis. On November 3, designer Stella McCartney — a crusader for sustainability since creating her luxury label in 2001 — gave the summit’s attendees a taste of what those solutions could be in a flourishing installation.

Titled “Future of Fashion: An innovation conversation with Stella McCartney,” the COP26 exhibit invited guests to imagine a “nature-positive” fashion industry through an exploration of the brand’s next-generation materials. Hosted at the Kelvingrove Art Gallery and Museum in Glasgow, “Future of Fashion” is part of Prince Charles’s Sustainable Market Initiative (SMI) and is aligned with its Terra Carta charter, designed to provide blueprint for businesses to move towards a sustainable future by 2030.

The installation features mannequins in sustainably-made ensembles alongside natural materials, including Bolt Threads’ Mylo mycelium “unleather”; the world’s first vegan soccer cleats, created by Stella McCartney in partnership with French soccer player Paul Pogba and Adidas; regenerative organic cotton from Söktaş; and Evrnu NuCycl- and Econyl-regenerated nylon sourced from post-consumer waste and ocean plastics. Materials are enclosed by glass and surrounded by sculptures of living fungi in the same vein as the designer’s Summer 2022 runway show, where models adorned sustainable pieces in a venue resembling the shape of a mushroom cap.

The Prince of Wales was present at the exhibit’s unveiling, and received a one-on-one tour from McCartney (the British designer famously created Meghan Markle’s wedding reception dress). Also in attendance was actor Leonardo DiCaprio, known for his support of environmental causes.

Stella McCartney is using the installation to promote the anti-fur movement by inviting COP26 delegates and the public to sign a pledge to end the use of animal leather and fur in the fashion industry. Before it became mainstream in the world of fashion, McCartney opposed the use of animal derived materials like leather, fur, skins and feathers in her collections. Today, nearly 45 per cent of the brand’s operations run on 100 per cent renewable, green energy, as reported by Elle.

“This is the Decisive Decade and if we do not act decisively, we know the consequences,” said McCartney in a press release. “A football pitch is disappearing from the Amazon every minute and 80 percent of that area is being used for animal agriculture. The future of fashion and our planet is vegan. I hope that by representing our industry and revealing my current material innovations at COP26, I can inspire action among private sector and government leaders by driving more nature-positive investments and incentives.”

The exhibit, running until November 5 and reopening from November 8 to 9, will host discussions from youth climate leaders, the British Fashion Council (BFC) and UK’s The Great Campaign.

Through the “Future of Fashion,” the designer is yet again championing sustainability, while calling on other fashion figures to do the same. “To not collaborate now would be an injustice to future generations and to those already suffering the worst of climate change’s effects,” she continued. “This is our chance and I do not believe in waste.”

Estate of Emergency: Jimi Hendrix Estate Preemptively Sue Noel Redding, Mitch Mitchell’s Heirs
Jon Hamm Stars in Hilarious New Apple TV+ Ad Where He Has FOMO
Are We in the Age of Acne Acceptance?
‘Spider-Man: No Way Home’ Zips To No. 6 On All-Time Global Chart With $1.69B; ‘Sing 2’ Now Top Toon Of Pandemic & ‘Belfast’ Breaks Out In UK/Ireland – International Box Office
Tove Styrke ‘Fell Madly In Love’ with Her BFF and Wrote a Song. Now We Get to Hear It