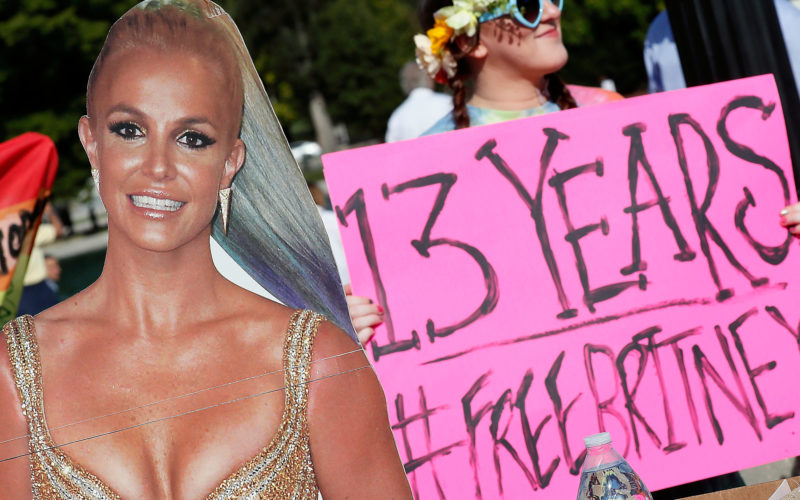 It’s what she deserves!

The pop icon was officially released from her 13-year conservatorship on November 12, and she’s wasted no time planning her next chapter. For now, that means relishing her reinstated independence by driving her car, having access to cash and buying candles (who doesn’t love a candle?). To add even more excitement, a Britney Spears tell-all may be in the works with the Celebrity Interview Queen herself, Oprah Winfrey.

To celebrate her freedom from the conservatorship that has long controlled her personal life, career and finances, Spears shared a video on November 16 answering questions from fans. She captioned the Twitter post, “I might as well do a hint of my thoughts here before I go and set things square on Oprah.”

Though an interview has not officially been confirmed by either party, we’ll take this tweet to mean the sit-down is a possibility. Colour us intrigued!

“I’ve been in the conservatorship for 13 years,” she said in the video, before taking a prolonged pause. “It’s a really long time to be in a situation you don’t want to be in. I’m just grateful honestly for each day: being able to have the keys to my car, being able to be independent and feel like a woman, owning an ATM card, seeing cash for the first time, being able to buy candles.”

But Spears told fans she doesn’t want to be seen as a victim, adding: “I’ve lived with victims my whole life as a child, that’s why I got out of my house and worked for 20 years.” Instead, she wants to be an advocate for people with disabilities and illnesses stuck in predatory conservatorships. “I’m a very strong woman, so I can only imagine what the system has done to those people,” she said.

When battling her conservatorship this past summer, Spears spoke out in court about how she was forced to undergo psychiatric evaluations and take medication that affected her cognitive function, as per the BBC. Spears’s mental health struggles were used as leverage for years to keep her conservatorship in place, namely by her father and conservator Jamie Spears. In her recent video statement, the singer said she hopes that her story can “make some changes in the corrupt system.”

After a judge ruled to terminate the conservatorship, Spears’s lawyer Mathew Rosengart spoke out about the news, saying, “What’s next for Britney — and this is the first time that this could be said for about a decade — is up to one person: Britney.” He added that she now has a personal and financial support system to fall back on.

As for whether Britney Spears will actually open up to Oprah, one thing’s for sure: It’s the platform Spears deserves.

Over the past year, Oprah has set the trend for hosting viral sit-down interviews with celebs who’ve made headlines (Prince Harry and Meghan Markle, Elliot Page and, most recently, Adele).

These conversations have seen high profile guests tell their own stories and clear up misconceptions. And so an Oprah-led conversation with the Princess of Pop would be enlightening, to state the obvious.

Until then, we’ll continue to appreciate the carefree, wholesome social media content Spears has been giving us since her freedom was granted. Over the past few days, she’s been very active on Instagram: posting selfie photo dumps, friendship memes and random photos of wet lipstick — mainly, doing whatever she pleases, because she can. If that involves an Oprah interview sometime in the future, we won’t complain.