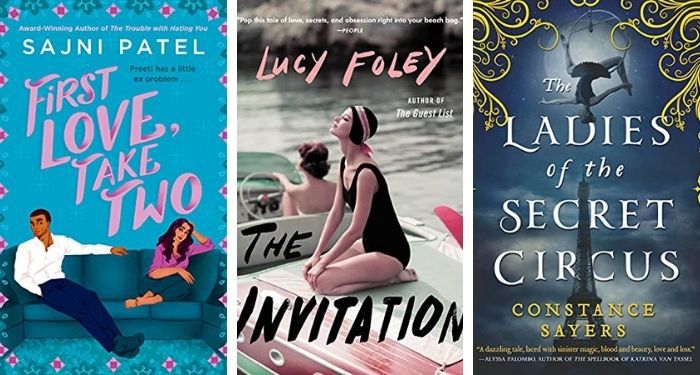 The Last Train to Key West by Chanel Cleeton for $2.99

To Be Taught, If Fortunate by Becky Chambers for $1.99

We Are Not Broken by George M Johnson for $2.99

Ancillary Justice by Ann Leckie for $2.99

Silent in the Grave by Deanna Raybourn by $1.99

The Electric Hotel by Dominic Smith for $1.99

The Frangipani Tree Mystery by Ovidia Yu for $0.99

Red Sky Over Hawaii by Sara Ackermanm for $1.99

An Unexpected Peril by Deanna Raybourn for $1.99

The Cutting Season by Attica Locke for $2.99

Her Body and Other Parties by Carmen Maria Machado for $2.99

Empire of Wild by Cherie Dimaline for $1.99

Mongrels by Stephen Graham Jones for $1.99

When Women Were Birds by Terry Tempest Williams for $3.99

The House on Vesper Sands by Paraic O’Donnell for $2.99

The Book of Lost and Found by Lucy Foley for $4.99

What Alice Forgot by Liane Moriarty for $1.99

Men at Arms by Terry Pratchett for $1.99

The Golden Thread by Ravi Somaiya for $2.99

When They Call You a Terrorist by Patrice Cullors and Asha Bandele for $2.99

Slippery Creatures by KJ Charles for $3.99

Relish: My Life in the Kitchen by Lucy Knisley for $2.99

Beowulf by Maria Dahvana Headley for $3.99

The Librarian of Auschwitz by Antonio Iturbe for $2.99

Monsters You Should Know by Emma SanCartier for $1.99

Gods of Jade and Shadow by Silvia Moreno-Garcia for $4.99

There’ve Been More Than 155 Book Challenges Since June: This Week’s Censorship News, December 3, 2021
‘The Power Of The Dog’ Has Loud Bark In U.S. Households For Netflix
Cartel Madras Fuses Experimental Hip Hop and Unapologetic Style
Being A Great Boss Matters More Than Ever
Extraordinary Leadership