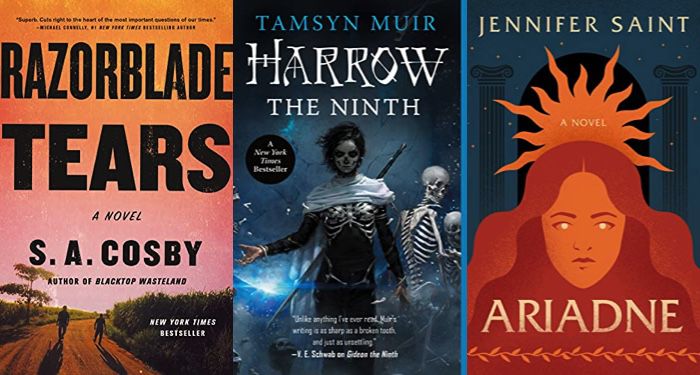 The Last Train to Key West by Chanel Cleeton for $2.99

To Be Taught, If Fortunate by Becky Chambers for $1.99

Silent in the Grave by Deanna Raybourn by $1.99

The Electric Hotel by Dominic Smith for $1.99

The Frangipani Tree Mystery by Ovidia Yu for $0.99

Red Sky Over Hawaii by Sara Ackermanm for $1.99

An Unexpected Peril by Deanna Raybourn for $1.99

The Cutting Season by Attica Locke for $2.99

Empire of Wild by Cherie Dimaline for $1.99

Mongrels by Stephen Graham Jones for $1.99

When Women Were Birds by Terry Tempest Williams for $3.99

The House on Vesper Sands by Paraic O’Donnell for $2.99

The Book of Lost and Found by Lucy Foley for $4.99

What Alice Forgot by Liane Moriarty for $1.99

Men at Arms by Terry Pratchett for $1.99

The Golden Thread by Ravi Somaiya for $2.99

When They Call You a Terrorist by Patrice Cullors and Asha Bandele for $2.99

Slippery Creatures by KJ Charles for $3.99

Relish: My Life in the Kitchen by Lucy Knisley for $2.99

Beowulf by Maria Dahvana Headley for $3.99

The Librarian of Auschwitz by Antonio Iturbe for $2.99

Monsters You Should Know by Emma SanCartier for $1.99

Gods of Jade and Shadow by Silvia Moreno-Garcia for $4.99

The National Confront Insecurities on New Song ‘Somebody Desperate’
Here’s What You Need to Know About Pain After a Pap Smear, According to Doctors
Dave Grohl and Greg Kurstin Bust Out Kazoos for Cover of Billy Joel’s ‘Big Shot’
Attention, entrepreneur! This is the first thing you should do before entering the market
The 5c’s to Help You Thrive Through Change