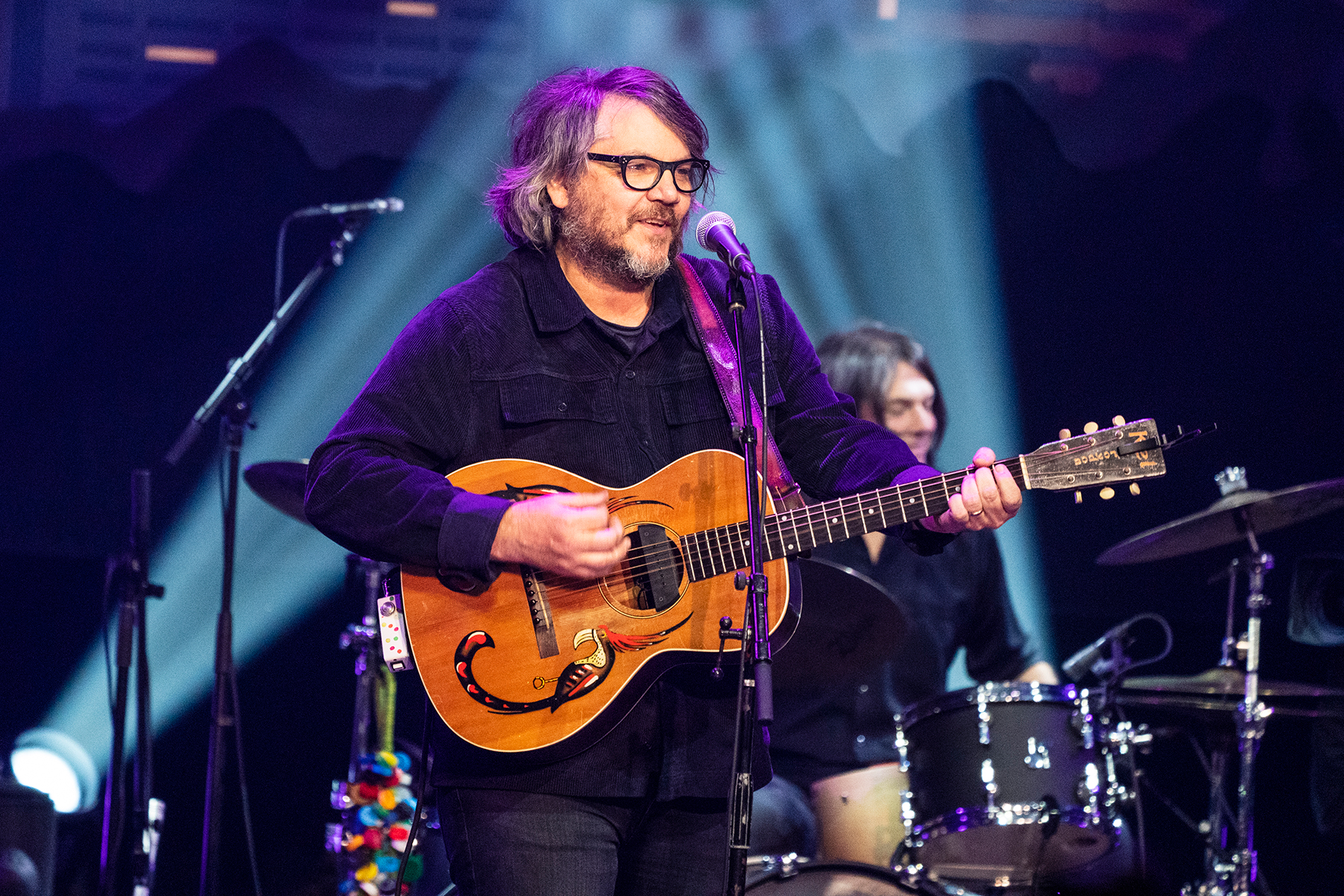 Mitch Timbanard is hoping his Covid test comes back positive. The 47-year-old Orange County, California resident is one of many Wilco fans anxiously awaiting the band’s SkyBlueSky festival in Cancun. The multi-day fest is scheduled to begin January 17th and feature Spoon, Kurt Vile, Stephen Malkmus and Thundercat, among others. But as the Omicron variant surges and promoter Cloud 9 has shown no signs of giving refunds for several thousand-dollar resort/ticket packages, Timbanard’s left with the difficult decision of going to Mexico and getting stuck down there if he catches the virus, or watching nearly $6,000 go down the drain.

With two vaccines and a booster shot, Timbanard doesn’t worry about falling seriously ill, but catching a mild case after he arrives would mean he’d be stuck quarantining in Mexico for several days longer, and he can’t miss extra days of work or be away from his children for longer than the original vacation plans. Catching a mild case now and getting a doctor’s note stating he recovered and is no longer infectious is, he claims, the most sure-fire way to guarantee he can go to Mexico and come back freely.

Wilco Play ‘California Stars’ With a Crazy Group of Guests, From Japanese Breakfast to Jason Isbell

Timbanard says he reached out to Cloud 9 and was told refunds were not available. And while he purchased travel insurance, it doesn’t allow him to cancel for any reason. He isn’t sure what options he has left.

“The whole thing is crazy,” he says. “The mindset they put us in is nuts, where now I’m hoping to get this disease to avoid getting stuck in a foreign county or I lose thousands of dollars. I know deep down the chance of going is over for us, plus if we get sick I don’t want to be stuck at a hospital in Latin America. But I still wanted to hope.”

Timbanard is an extreme among the thousands of ticket holders for the Cancun shows, but his sentiment reflects one many fans have told Rolling Stone: that they’ve gotten little information from artists and show organizers and have little idea what to do beyond lose their money or attend a show they aren’t comfortable going to.

After seeing Deadheads get an option for refunds for their Playing in the Sand Cancun dates (following weeks of pressure from fans), and following the abrupt cancellation of the event on Thursday, others have followed suit. Nearly 800 people have signed a petition asking for refunds for the Wilco festival, and refund petitions for Cancun shows from Luke Bryan, Dave Matthews and the Avett Brothers are also getting hundreds of signatures.

CID Presents, which ran the canceled Dead show, is requiring a negative covid test taken within four days of check-in for its upcoming Bryan, Matthews and Phish shows, and the Matthews and Phish gigs also require proof of vaccination. Cloud 9, promoter for Widespread Panic and the Avett Brothers’ Cancun dates along with Wilco, is requiring a negative test taken within two days of check-in.

While some ticket holders have commended the promoters’ strong covid policies, fans in some cities worry they can’t get a test scheduled in the two-day window or won’t get results back in time. Then there’s the uncertainty a plane will take off given all the cancelations airlines have faced during the surge. The biggest fear, however, remains getting sick on the way to the concerts or at the resort, which would force attendees to stay in Mexico for several days longer than anticipated. While that’s not a problem for some concertgoers, those with children at home or jobs that don’t allow remote work can’t take the risk.

“Cases were low. Looking back, we wish we bought insurance, but I was also so sure they’d cancel if it got like this,” says 56-year-old Chicagoan Susan Bukowski. “I want the money back but it’s also the principle here, where the promoters aren’t choosing the safety of the fans.”

On Jan. 1st, Cloud 9 sent an email to fans saying that “economic realities restrict us from offering full refunds.” The email further specified that Cloud 9 was ready to help fans who didn’t want to attend transfer to another fan on the waitlist, and that the company would waive transfer fees.

Bukowski says the market for reselling a ticket is low given the surge and called Cloud 9’s email “insulting.” “The email was tone deaf, and that’s what we’ve been given from them,” she says. “They didn’t move the goal post from where covid was in June.”

Bukowski says she’s emailed Cloud 9 multiple times but was also told refunds weren’t available. Marc Hernandez, a 48-year-old Luke Bryan fan in Los Angeles, faced similar issues with the singer’s upcoming Crash My Playa show, which he and his wife spent over $2,000 on. He started reaching out to CID about a refund just before Christmas and followed up multiple times, but was told he couldn’t get a refund.

“No one ever thought this is where we’d be by now with cases; there are too many risks for us to go,” Hernandez says. “After the Dead offered refunds, I thought we’d be extended the same courtesy. I’d go further to say the expectation would be that CID would cancel by now. How should we have any faith in this being done right given how they canceled the Dead show so abruptly when people already arrived? I don’t want that to happen to me.”

CID didn’t respond to request for comment for this story. A representative for Bryan confirmed to Rolling Stone that the show would proceed.

Amy Sutherlin, a 62-year-old from Jackson, Missouri, is growing more worried about the Dave Matthews show she spent over $7,000 on slated for mid-February and like every other fan who spoke for this story, has gotten little response from the promoters. She did reach out to the Dave Matthews Fan Club as a member and is waiting for their response. (Representatives for the Dave Matthews Band didn’t respond to request for comment.)

With Wilco’s show in particular, the band and singer Jeff Tweedy both say they have no control over refunds and pricing policies, and that those decisions rest exclusively on the promoter.

“With respect to the Sky Blue Sky festival, Wilco has been independently contracted to perform at this event and to have their name used to promote sales of tickets, in the same manner as most other live appearances by the group,” a rep for the band said in a statement. “The festival promoter, Cloud 9, is solely responsible for and determines all ticketing policies, including pricing and availability of refunds or credits.”

“I 100% understand all the anxiety and anger and confusion that has been surrounding the SkyBlueSky festival,” he said. “Wilco, we’re in a similar boat to everyone, not the same boat obviously, but a similar boat in that we’re trying to figure it out. We’re a contracted entity for this event… We’re hoping there’s some situation that becomes clear and resolves itself in a way that makes everyone happy. I find that to be an unlikely outcome at this point. I don’t think there’s anybody intentionally trying to fuck anybody over. I think there are a lot of rocks and a lot of hard places to be in on this particular topic.”

When presented with fans’ concerns and Wilco’s statement, Cloud 9 noted that there were “safety protocols in place for exclusively outdoor shows.”

“The safety and security of all attendees, artists and crew is of paramount importance at all times,” the company said. “While some fans may be feeling anxious about the evolving nature of the pandemic, many others remain enthusiastic about their travel plans and navigating these times safely,” the  company said. “All of this is being monitored closely via active discussions with local authorities and health care experts. Organizers will continue to evaluate the viability of the upcoming events to determine prior to each one whether it can proceed in a safe manner. A refund, or the ability to hold one’s spot for a rescheduled date, will be available to purchasers if any event were to be postponed.”

The desire to stop the shows isn’t universal. Facebook pages for several shows are often contentious, with some fans questioning the severity of the new variant and saying that the reluctance of some ticket holders shouldn’t change the trajectory of the show or prevent fans who want to go from enjoying concerts on the beach.

But as Dead & Company’s canceled gig showed, the optics of making a show happen go beyond fans. If artists or crew get sick, the shows can’t go on. There’s still the risk of getting very sick as well, even if it’s less likely for those who’ve gotten the vaccine and boosters.

“I’m really on the fence right now,” Sutherlin says. “I’d really hate to lose all that money but the thought of being stuck isn’t great. And say you have a rare outbreak and get sick sick. There are breakthrough cases of people getting really sick, even if they’re rare. Now you’re hospitalized in a foreign country. I don’t want that.”