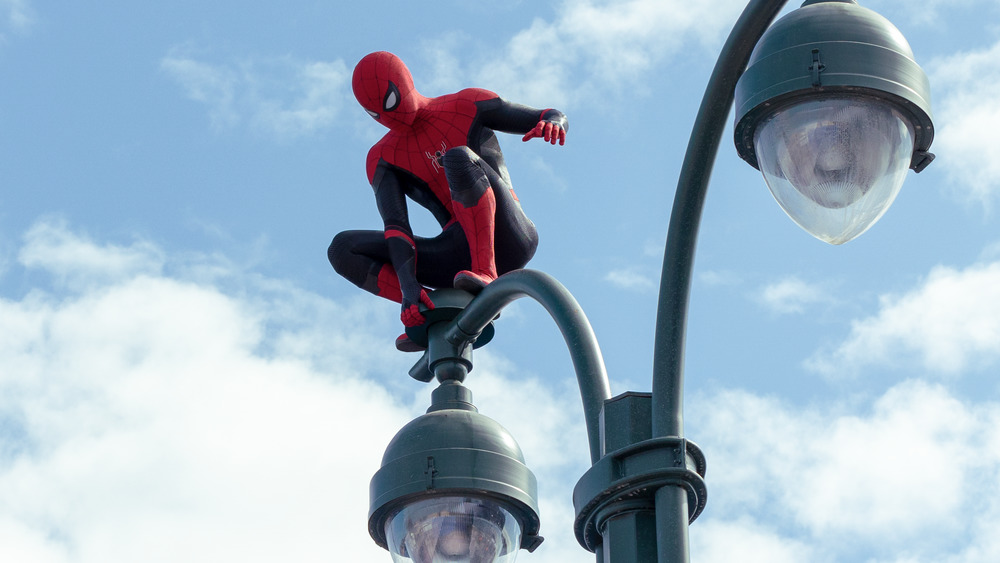 Refresh for chart and more analysis Some studio distribution bosses use to say that moviegoing is a 52-week business. Well, that’s not the philosophy this weekend, and it’s even grimmer next weekend as most of the majors figured in the wake of MLK weekend, and a traditional box office dead zone like January with Omicron flying around, that it wasn’t worth the P&A spend to put any kind of movie out there. Back in the good ole days, and we’re talking five years ago, post MLK was the time when Universal turned M. Night Shyamalan’s Blumhouse horror movie Split into an event with a $40M start, and Paramount settled for second on their Vin Diesel sequel xXx: Return of Xander Cage for $20.1M.

Spider-Man‘s cume by Sunday keeps the blockbuster title in 4th place among all movies at the domestic box office. If the webslinger is going to beat Avatar and become the third-highest grossing movie of all-time in U.S. and Canada, Spider-Man: No Way Home has to do more than $40.1M in business. Through six weekends, No Way Home is 31% ahead of Avatar at the same point in time (which was at $551.7M by the end of the post MLK frame), however the difference between the movies is that Spidey is more front-loaded, while Avatar continued to do meaty numbers into Presidents Day weekend (i.e. weekend 6 was $34.9M, weekend 7 was $31.2M, weekend 8 was $22.85M while the 4-day Presidents Day holiday pulled in $28.7M).

Major studio moviegoing isn’t expected to come back until Feb. 4 with Lionsgate’s sci-fi Roland Emmerich title Moonfall and Paramount’s Jackass Forever. One wonders if there was a missed opportunity by studios not programming this weekend. I get it, best to spend your marketing money during a pandemic on the holiday frames, when there’s more of the audience that could come out. However, with the 18-34 demographic being the most confident to head to the movies, it’s interesting to note that there were more colleges out yesterday at 15% and K-12 at 3% then there is on Feb. 4 which is respectively 2% and 1%. Go figure, but in the wake of Sony moving Morbius, the assumption was that Omicron would be worse by this point in time. The surge is flattening according to the Los Angeles Times here in LA County, even though California is averaging 100K new cases a day, more than twice as high as last winter’s high of 46K.  Los Angeles County Public Health Director Barbara Ferrer advised many to delay nonessential activities such as unmasked parties and dinners.

There will come a time when studios return to a big event movie a week, essentially that starts on March 25 with Paramount’s The Lost City and continues into summer. Until then there are dead zones on the calendar, i.e. next weekend there’s nothing, on Feb. 25 there’s no wide releases, and the weekend after Warner Bros. The Batman opens on March 11, there aren’t any wide releases programmed, however, analysts seem to debate whether the Matt Reeves DC title will be another $100M opener; news of the pic’s 2 hour and 55 minute running time casting a little bit of doubt.

You may have noticed that Universal did open the faith-based period movie Redeeming Love based on the Francine Rivers novel in 1,903 theaters to $1.49M yesterday, set for a $4M weekend, but it’s not the studio’s movie. They’re just doing a distribution deal and I understand that they’re not even on the hook for marketing. The movie from Eagle Eye and Disturbia director D.J. Caruso was produced by Nthibah Pictures, Pinnacle Peak Pictures, and Mission Pictures International. Roma Downey is listed as an Executive Producer. Unlike other faith-based movies which typically win over their audiences with an A+, Redeeming Love received a B+. Comscore/Screen Engine PostTrak exits were at 85% positive and 72% recommend. Has anyone seen any ads for this film? I sure have not.

I hear there weren’t any NYC or LA cinemas in the top 100 runs for the movie, with the South reaping close to 60% of the movie’s gross versus the business average of 35% for a regular wide release. Females led at 79% with 76% over 25 with close to have over 35. The 24-34 year olds repped close to a third of ticket buyers. Diversity demos were 65% Caucasian, 16% Latino or Hispanic, 11% Asian/other and 8% Black.

Shot in South Africa, Redeeming Love is set against the 1850 California Gold Rush and follows Angel (Abigail Cowen), who was sold into prostitution as a child. She has survived through hatred and self-loathing, until she meets Michael Hosea (Tom Lewis) and discovers there is no brokenness that love can’t heal. Critics turned their backs on this one at 11% on Rotten Tomatoes.

With the lack of competition on marquees, Gravitas Ventures decided to make the Pierce Brosnan-William Hurt movie The King’s Daughter their widest release ever at 2,170 locations. The movie’s weekend results made Redeeming Love‘s ticket sales look like a blockbuster with an estimated $750K. The PG movie follows Brosnan as The Sun King, Louis XIV. Obsessed with his own mortality and the future of France, Louis turns to his spiritual advisor, Père La Chaise (Hurt), and the royal physician to help him obtain the key to immortality. Believing a mermaid (Fan Bingbing) contains a force that grants everlasting life, Louis commissions a young sea captain to search the seas and capture the mystical creature. Further complicating his plans is his orphaned daughter, Marie-Josèphe (Kaya Scodelario), who returns to court with an abundance of elegance and an inherent defiance of authority. Critics enjoyed The King’s Daughter just a little bit more than Redeeming Love at 26%. Soft ticket sales here, mostly in the West with PostTrak at 66% and a low 31% recommend. Those few who decided to see it were women at 55%, 88% over 25, 62% over 35 and 43% over 45 years old. Diversity demos were 72% Caucasian, 19% Latino and Hispanic, 6% Asian/other and 3% Black.