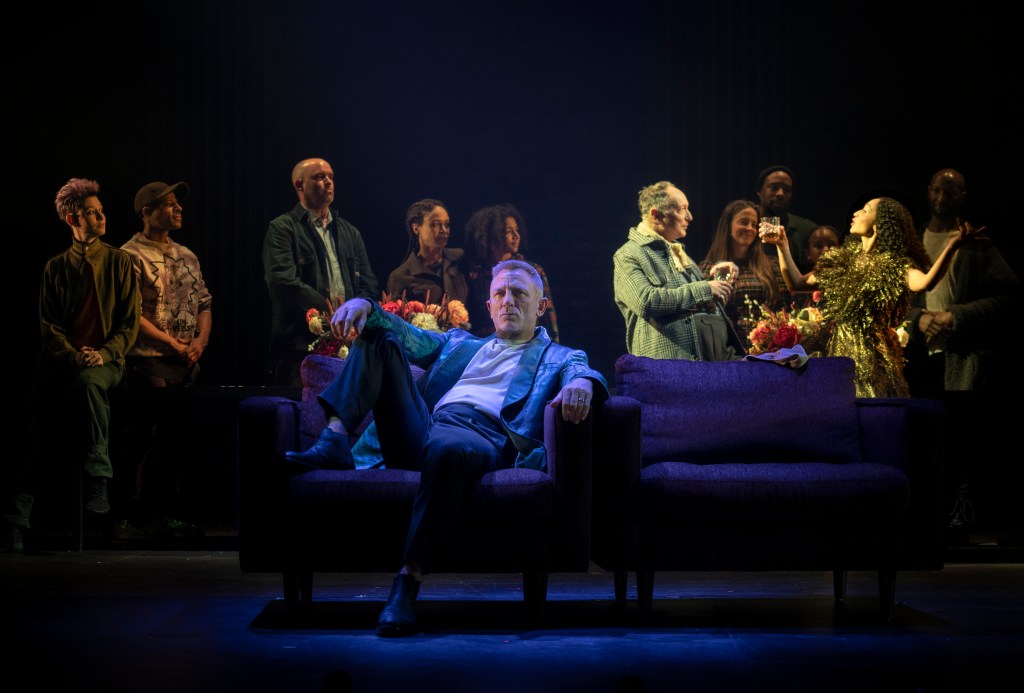 Likely reflecting a slimming down of spring break and Easter tourist business, attendance was off by 10% last week from the previous week, coming in at 241,500. That number suggests that only 75% of available seats were filled, a significantly lower figure than the 85%+ numbers reported earlier this spring.

Also impacting receipts was the large number of opening nights, with press comps and other freebies eating into the figures at The Skin of Our Teeth, A Strange Loop, POTUS, Mr. Saturday Night and Macbeth. The Tony Award eligibility cut-off date is May 4.

The average ticket price for the roster was down as well, to $120 from the previous week’s $128.

Mr. Saturday Night played six performance (compared to the previous week’s seven) and took a modest drop to $711,269. Attendance was at 84% of capacity. Funny Girl slipped $31,175 to $1,116,473, still filling 97% of seats despite some previously planned weekend absences of star Beanie Feldstein and the unexpected absence of co-star Ramin Karimloo due to a positive Covid test.

Macbeth, starring Daniel Craig and Ruth Negga, was off by $314,446 to $970,737, reflecting a heavily comped run of six press nights (out of seven performance overall), with attendance staying strong at 99%.

No show was completely SRO, though a handful came close, reporting attendance at 95% of capacity or more: The Music Man, Funny Girl, Hadestown, How I Learned To Drive, Macbeth, Plaza Suite, Moulin Rouge,

Other shows with opening nights last week included The Skin of Our Teeth, filling 47% of seats; A Strange Loop (76%); and POTUS (77%).

Girl From The North Country, the musical of Bob Dylan songs, returned from its winter-long hiatus for three performances, filling 56% of its seats. Hangmen drew about the same percentage, with Paradise Square, The Phantom of the Opera and Tina in a roughly similar vicinity. The Little Prince, the aerial spectacular that has announced a three-month-early closing date of May 8, played to three-quarter empty houses at the Broadway Theatre, grossing just $232,808.

The 36 productions reporting figures on Broadway last week were Aladdin; American Buffalo; Beetlejuice; Birthday Candles; The Book of Mormon; Chicago; Come From Away; Company; Dear Evan Hansen; for colored girls who have considered suicide/when the rainbow is enuf; Funny Girl; Girl From The North Country; Hadestown; Hamilton; Hangmen; Harry Potter and the Cursed Child; How I Learned To Drive; The Lion King; The Little Prince; MJ; The Minutes; Moulin Rouge!; Mr. Saturday Night; Mrs. Doubtfire; The Music Man; Paradise Square; The Phantom of the Opera; Plaza Suite; POTUS; Six; The Skin of Our Teeth; A Strange Loop; Take Me Out; Tina; and Wicked.

All figures courtesy of the Broadway League.

Watch My Chemical Romance Perform ‘The Foundations Of Decay’ for First Time Live
How to Improve Your Digital Copywriting
A Notorious B.I.G. Classic Gets Flipped Into a New Song Featuring Ty Dolla $ign, Bella Alubo
She & Him Preview ‘Melt Away: A Tribute to Brian Wilson’ LP With ‘Darlin’’ Video
Amanda Bynes Very Interested in Doing ‘What I Like About You’ Revival