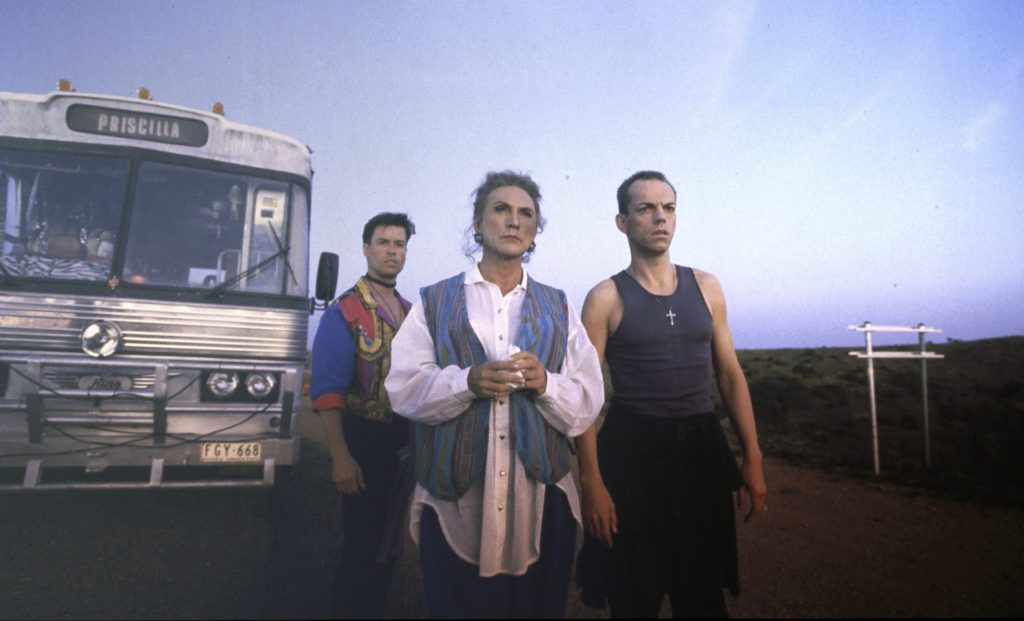 Iconic Events Releasing is kicking off Pride Month on June 2 with a nationwide rerelease of MGM’s Oscar-winning movie The Adventures of Priscilla, Queen of the Desert.

Released in 1994, the Stephan Elliott directed and written title starred Terence Stamp, Hugo Weaving, and Guy Pearce as a trio of performers who take their drag show on the road to perform at a small -town casino in the middle of the Australian desert, and for a host of locals throughout the rural Outback. The movie featured stellar Oscar-winning costumes by Lizzy Gardiner (who stole the Oscar show with a dress made out of 254 American Express Gold cards) and Tim Chappel with a soundtrack that included such classics as Gloria Gaynor’s “I Will Survive” and ABBA’s “Mamma Mia,”. The pic is known for blazing a trail on the big screen for its LGBT themes, becoming a landmark title in LGBT cinema.

“The exuberant spirit of Priscilla – to let your flag fly with pride for who you are – was the right message for this groundbreaking Oscar- winning film and it resonates today now more than ever,” says Steve Bunnell, Iconic Events’ CEO. “We’re thrilled to be partnering with our friends at MGM and Park Circus to ring in Pride Month with a hugely fun, celebratory fan favorite that truly pops on the big screen and will leave you singing and dancing with pride in the aisles.”

Gardiner’s dress, along with the film’s other notable costumes, was later auctioned to benefit AmfAR, the Foundation for AIDS Research, and now resides in the National Gallery of Victoria. The Adventures of Priscilla Queen of the Desert made $11.2M at the domestic box office when it was release in 1994.