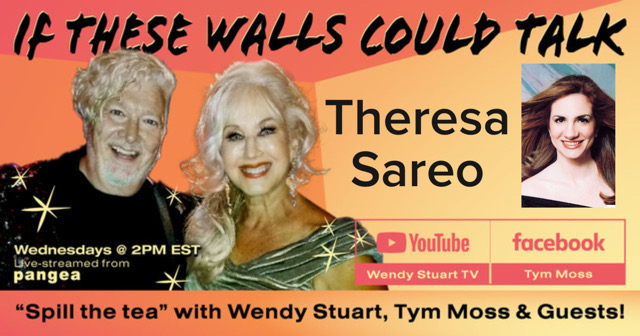 Who else but hosts Wendy Stuart and Tym Moss could “spill the tea” on their weekly show “If These Walls Could Talk” live from Pangea Restaurant on the Lower Eastside of NYC, with their unique style of honest, and emotional interviews, sharing the fascinating backstory of celebrities, entertainers, recording artists, writers and artists and bringing their audience along for a fantastic ride.

Theresa Sareo will be a featured guest on “If These Walls Could Talk” with hosts Wendy Stuart and Tym Moss on Wednesday, May 25th, 2022 at 2 PM ET live from the infamous Pangea Restaurant.

Wendy Stuart is an author, celebrity interviewer, model, filmmaker and hosts “Pandemic Cooking With Wendy,” a popular YouTube comedic cooking show born in the era of Covid-19, and TriVersity Talk, a weekly web series with featured guests discussing their lives, activism and pressing issues in the LGBTQ Community.

Tym Moss is a popular NYC singer, actor, and radio/tv host who recently starred in the hit indie film “JUNK” to critical acclaim.

Singer Songwriter Theresa Sareo had been a fixture on the NYC music scene, skyrocketing to the top, when her life changed in the blink of an eye. Struck by an impaired driver on her way to delivering her press kit to her agent, she ended up losing her entire right leg. And she discovered the intense healing of music and lyrics in her own healing. Volunteering at Bellevue Hospital where she had been a patient, she became the first appointed volunteer to be a peer visitor in conjunction with the hospital’s Psychiatric, Social Work, Art Therapy, and Trauma/SCU Departments. She was now using her talents in a new inspiring way. She became the first civilian at Walter Reed Hospital to sing the National Anthem as well as writing “Through A Soldier’s Eyes” which became an anthem for the troops in Iraq. Called “A Beautiful and Courageous Woman…A True Role Model” by Hillary Clinton, she is a speaker at medical symposiums at leading trauma hospitals.

She uses her singing and songwriting to inspire humanitarianism, healing, and communion. She collaborated with Blood, Sweat, and Tears, singing background on their 9/11 tribute “The Lights of Broadway” and performing with them in concert. With benefit concerts for 9/11, NYC Police and Fire Departments, Songwriting Workshops at NYU’s Hospital for Joint Disease’s Initiative for Women with Disabilities Young Women’s Program, Theresa is “honored to have had the privilege to serve others with her art, and I hope to do the same with you”. Her story is one of incredible inspiration….

Watch Theresa Sareo on “If These Walls Could Talk” with hosts Wendy Stuart and Tym Moss on YouTube here:

Subscribe and listen to “If These Walls Could Talk” on Apple Podcasts/iTunes here:

How Success Happened for Selina Sykes and Laura Fruitman, CEO and CMO of The Uncovery
This Cheer-Inspired Ab Workout Will Prep You to Take the Mat
Two Actors Killed in Crash Near Set of ‘The Chosen One,’ 6 Others Injured
The Workplace After Roe: 4 Key Questions & Resources
Best Selling Self-Help Books and the Missing Women Phenomenon