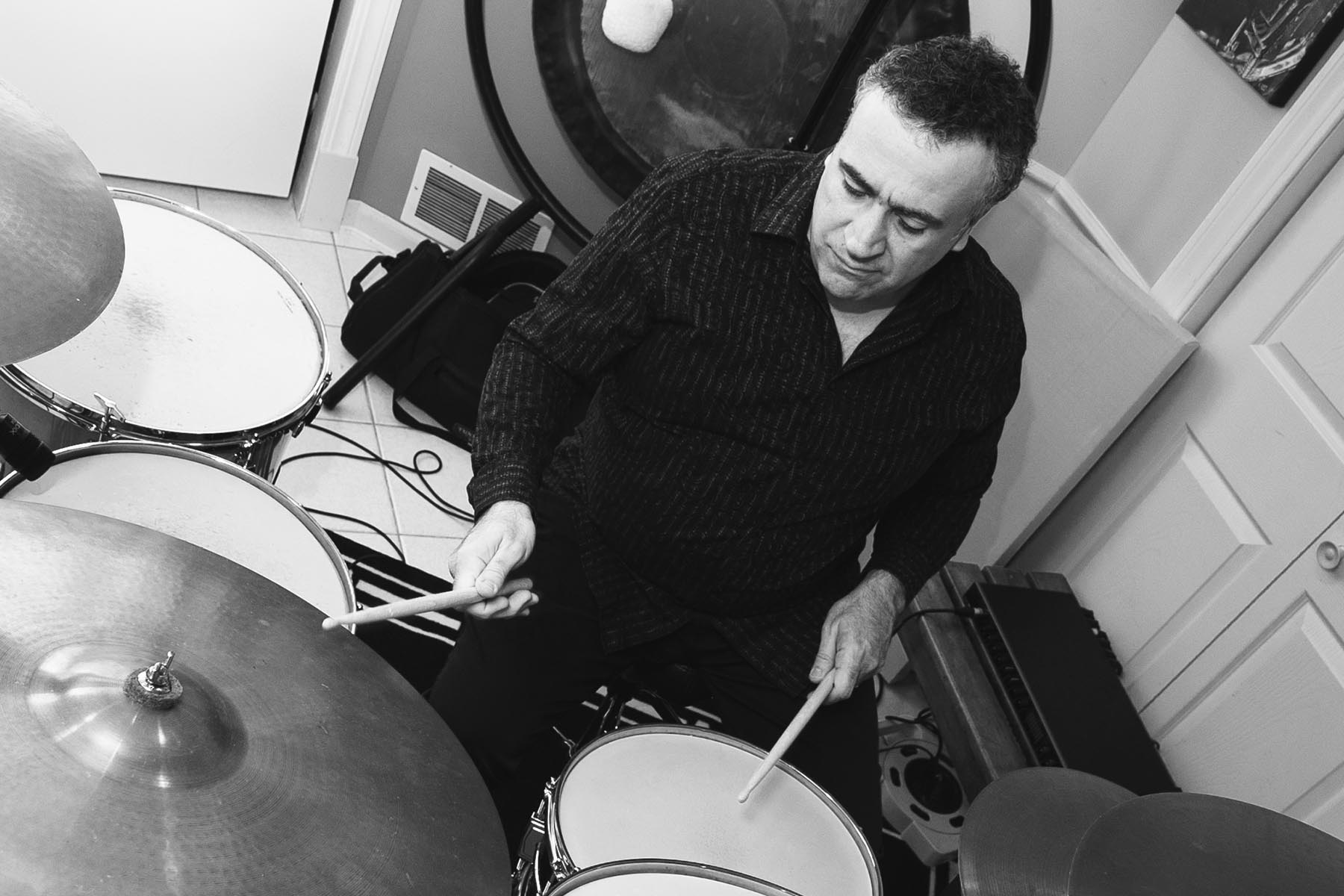 Led Zeppelin drum covers aren’t exactly a rare commodity. A quick YouTube search turns up a sea of results, from child prodigy Yoyoka Soma nailing “Good Times, Bad Times” to various tribute-band members replicating Bonham’s famous Song Remains the Same look, complete with headband, ‘stache, and translucent-orange Ludwig Vistalite kit. But amid the hundreds of takes on “Ramble On,” “Rock and Roll,” and “Black Dog,” you’ll find something singular: a man covering not just songs, but entire concerts: as in every monster fill in “Whole Lotta Love,” every groovy detour in a marathon “Dazed and Confused” jam, and every barehanded smack in the “Moby Dick” solo that went down across the better part of three hours one night in, say, Osaka, Japan, in September 1971 or Southampton, England, in January 1973.

Inside hate5six, the YouTube Channel That’s Bringing Hardcore to the Masses

There’s not an ounce of theatricality in the videos George Fludas posts on his Bonhamology YouTube channel. He’s an unassuming fiftysomething dad who sets up his kit in his family’s Chicago living room, often with a fridge visible behind him. He doesn’t make any kind of show of his playing — you’ll occasionally see him crack a smile, but his movements are economical and contained, probably stemming from his main gig as a jazz drummer. But his grasp of Bonham’s style — that combination of sledgehammer force and greasy funk that’s made him the most admired rock drummer of all time — is uncanny. It’s hard to think of another player who’s internalized the Bonham dialect so thoroughly, not just imitating but somehow channeling the late Zeppelin powerhouse.

Fludas, 55, has been a Zeppelin fan since around age 10, when his dad took him to see The Song Remains the Same. He went on to make his living playing jazz with legends like Ray Brown and Hank Jones, once in a while jamming along to Zeppelin albums in private, but a switched flipped in 2003 when the band released its eponymous DVD and How the West Was Won live album, both presenting a trove of previously hard-to-find concert recordings. He soon fell down a Zep bootleg wormhole, snapping up all the soundboard tapes that had emerged since he’d last checked in.

“It was a revelation, like, ‘Wow, there’s all of this live Bonham that I hadn’t heard over the last 15 years,’” Fludas says. “I started to get really into collecting the shows. … Then that turned into more of an analytical approach. It was interesting to me to hear how he played in different eras, like in the ’70 tours, for example, versus ’71. He was integrating different things into his playing, different types of phrasing or maybe different technical things.”

Around the same time, Fludas started checking out Bonham covers on YouTube, and discussing them with his drummer friends. Too often, he says, he found these reproductions lacking. “There’s that part of me that was always like, ‘The tuning is way off, the feel is off, and there’s no funk. There’s no soul,’” he says. “So many rock drummers miss the mark with Bonham. … With Bonzo, I really feel like he was a soul and R&B drummer with a very heavy, but very wide dynamic range. Those were the things I wanted to talk about.”

This is where the alchemy of Bonhamology comes in. Some would-be Bonham emulators get all the nit-picky details right but lose his essence somehow. While Fludas does often perform on vintage Ludwig kits and delve into the science of how Bonham tuned his drums to produce that gorgeously resonant boom-thwack that generations of players have tried to imitate, he doesn’t get too hung up on the particulars.

“The most significant factor is having a touch, and knowing how to produce a sound on whatever instrument you’re playing. … That’s in here and it’s also in here,” he explains, pointing to his hands and heart in turn, of the secret to capturing Bonham’s style. “You almost have to have an internal sense of what you want to sound like before you can bring it out. I get a lot of questions on the channel about, ‘I’m really not able to get my snare drum sounding like yours, and I’m following your tuning advice: I’m using a [Remo] Coated Ambassador [head] … and I have the 42-strand snares and it’s a [Ludwig] Supraphonic, but I’m still not getting the sounds.’ Well, a lot of it is touch. A lot of it is how you hit the drum, how you pull the sound out of the drum.”

Fludas started off by covering specific Zeppelin songs, then zeroed in on how Bonham modified certain tunes onstage in certain eras, and eventually started covering specific live recordings — the famed Royal Albert Hall show from January of 1970, say — posting each track as a separate video. Then he had a wild idea: What if he went for an entire show?

“Most jazz gigs, I’m lucky if I break a sweat unless we’re really going in. And I thought, ‘Man, I don’t know if I could handle a two-and-half–hour show …,’ because Zeppelin would often play well over two hours. So part of it was almost like a challenge to myself: Could I sustain just playing along with a whole bootleg concert?” he says. “And then I thought, if there’s anything that I would enjoy seeing as a super fan, it would be that. … So I just thought, ‘Well, I’ll try that and see how it goes.’”

“I really feel like Bonham was a soul and R&B drummer with a very heavy, but very wide dynamic range.” —George Fludas

Fludas’ playthroughs are mind-blowing feats of memorization — he says he doesn’t notate anything and just spends a couple weeks immersing himself in a given bootleg before attempting a cover. He then simply cues up the show and goes for it, adhering to a strict no-edits policy. (Sometimes he’ll start over if he makes a mistake, but usually he’ll plow through.) Ultimately, though, what ends up being most impressive about these full-show covers is how relaxed they feel: less stress-ridden high-wire acts than extended meditations, and the perfect antidote to what Fludas calls the “dunk contest” mentality that thrives on TikTok and other social media driven by bite-sized exhibitions of musical skill.

“Once you’re a couple tunes in and really hitting hard and everything, it’s a great feeling,” Fludas says. “It’s like, as an adult, you’re in your happy child’s play place or something, which is really what it’s about, playing an instrument. It doesn’t matter how old you are; ultimately, that’s where you want to get: It’s that childlike sense of dissociation with the rest of the world.”

Bonhamology has branched out into many directions in recent months. One enlightening video series sees Fludas breaking down the Zeppelin catalog album by album and tracing Bonham’s style and drumming highlights within each period. (For his In Through the Out Door installment, Fludas recorded in a rented house in Wisconsin, which one commenter playfully dubbed ‘Cheesehead-ley Grange,’ after Headley Grange, the English retreat where Zeppelin famously achieved some of their hugest drum sounds.) And Fludas visited Steve Albini’s Electrical Audio studio to record Bonham-style beats and snippets for Yurt Rock, a company that provides sample packs featuring renowned drummers.

As proud as he is of his full-gig renditions, Fludas seems most fired up about the People’s Front of Zeppelin, or PFoZ, a remote cover band he started during the pandemic with guitarist Ivan Jakic and bassist Pete Etxenike, and that’s earned him some encouraging DMs from Jimmy Page’s girlfriend, who passed along a thumbs-up from Page. Fludas has fielded offers to join full-on Zeppelin tribute bands, but what he calls the “cosplay” aspect is a sticking point. (“I won’t wear a wig,” he recalls telling one agent.) But PFoZ is different: Instead of emulating a specific Zeppelin performance, Fludas and his collaborators essentially conjure their own based on their intimate knowledge of how the band stretched and explored its tunes live. In doing so, they blur the line between re-creation and genuine creation. Watching their roomy, 29-minute “Dazed and Confused,” featuring vocalist Tai Vare, the listener starts to experience the Bonham style not as a series of technical specifications but as a living language.

“I’m just sort of freewheeling in that style, which I do that because I think that’s important for drummers also to understand: Come up with your own shit. Don’t just learn the parts on the record and then that’s it,” Fludas says, zeroing in on the philosophy that guides much of his work on the channel. “There’s some drummers who play an original songwriter’s music and they feel like they have to be limited to, ‘Once I figure out fills or certain sections … I’m always going to stick with that.’ And a drummer like Bonzo is so inspiring to this day because when [Zeppelin] played live, he didn’t do that. I mean, of course he played the arrangement, and he would move to the ride cymbal on ‘Stairway to Heaven’ during the guitar solo, let’s say. But he was always switching the beat up, experimenting with new grooves, new fills.

“So that’s really the ultimate purpose of the full-show play-alongs: a demonstration over the course of two and a half hours of playing in the style of Bonham, but trying to … If you’re going to do it for yourself, do it and have fun with it,” he continues. Then, as if struck by the deep idiosyncrasy of his ongoing Bonhamological research, Fludas adds, “I don’t know why the hell I’m doing it,” and laughs. “It’s kind of a bizarre thing.”

“Aninsideout” Journey to Innovation in Cross-Culture Work Environment
Book Riot’s Deals of the Day for June 26, 2022
NO MOLASSES IN RHUM
Why the FDA Is Looking to Ban Juul in the US
Megan Rapinoe Condemns “Cruelty” of SCOTUS Decision to Overturn Roe v. Wade