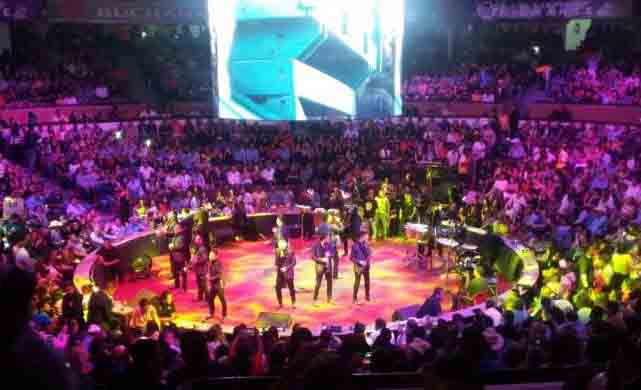 On Tuesday, the FBI arrested two música Mexicana record label executives for doing business with a concert promoter with ties to Mexican drug cartels in 2018.

Angel Del Villar, CEO of Del Records, and Luis Scalisi, CFO of subsidiary Del Entertainment, were arrested and later released on bail for allegedly conspiring to violate the Kingpin Act, which prohibits Americans from conducting business with foreign narcotics traffickers.

The FBI complaint alleges that the two men exchanged money and services with a man named Jesus Perez Alvear — listed as a narcotics trafficker under the Kingpin Act, and who works at company Gallistica Diamante — for the performance of one of Del Records’ artists in Aguascalientes, Mexico in April 2018.

Though left unnamed and referred to in the criminal complaint as “Individual A,” Del Records’ former signee Gerardo Ortiz — known for his narcocorridos, or songs about the drug trade and cartels in Mexico —  performed at Palestra Aguascalientes the night listed in the court documents. The complaint also alleges that 10 days prior to the performance, the FBI alerted Ortiz about Perez’s ties to drug trafficking and his designation under the Kingpin Act. He flew into the Mexican state on a private jet paid for by Del Villar and performed that night anyway.

Reps for Del Records and for Gerardo Ortiz did not immediately respond to Rolling Stone‘s requests for comment.

The arrests of Del Villar and Scalisi come two years after the FBI conducted a raid at the offices of Del Records — the label behind acts such as Eslabón Armado, Los Del Limit, Lenin Ramirez, and Panchito Arredondo — in 2020 after the label sued Ortiz for wanting to be paid in cash for his performances in an alleged attempt to evade taxes. (The year prior, Ortiz had sued Del Records for fraud and breach of contract.)

At the time, Del Records had alerted the FBI that Ortiz had performed in Mexico for an alleged trafficker, per Variety. The label said then that it had not been “a subject but merely a source of information for the FBI’s investigation into Mr. Ortiz.”

The new criminal complaint also states that Ortiz performed at four different concerts organized by Perez in Baja California, Guanajuato, and Chiapas in 2018 and 2019.

Del Villar and Scalisi are set to be arraigned on July 20, after being released Tuesday on $100,000 and $35,000 bond, respectively. If convicted of violating the Kingpin Act, they would face a maximum sentence of 30 years in federal prison each. Perez’s whereabouts are unknown. He could face a maximum of 10 years in prison.

Coinbase shares fall after rival Binance.US drops spot bitcoin trading fees
‘It Doesn’t Feel Dark to Me’: PJ Harvey on Her Surreal New Novel, Growing Older, and the Beauty of Ugliness
5 Ways to Get Media Coverage for Your Brand
Being Authentic: Whether to Involve Your Company in Social Causes, And How
You’re Probably Falling for All of Amazon Prime Day’s Psychological Sales Tactics. A Marketing Professor Reveals Them — and How You Can Actually Get the Best Deal.