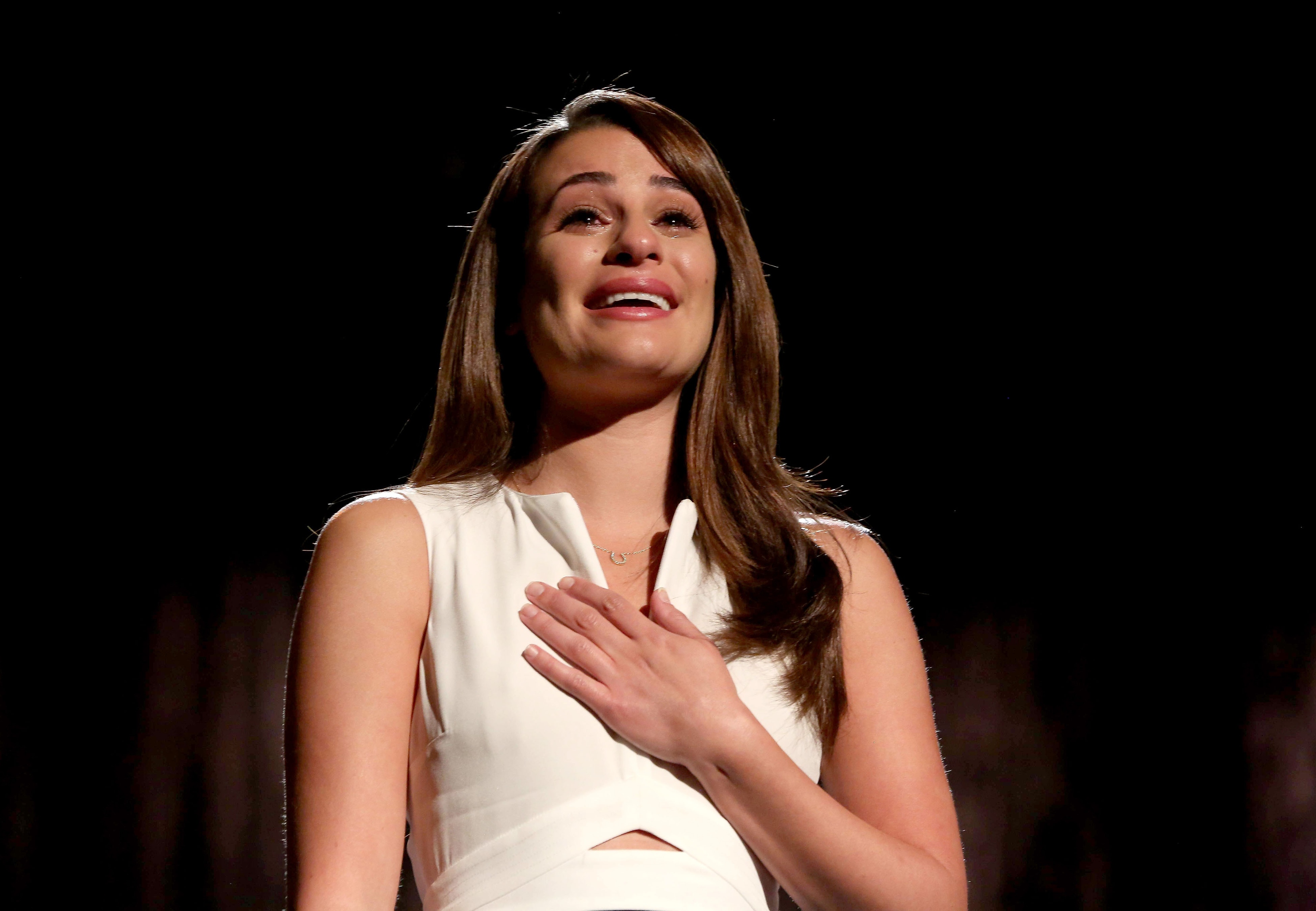 From 2009 to 2015, Glee brought sharp comedy, messy plot twists and many, many covers to our television screens. The Fox series about the teenage members of the New Directions glee club was as chaotic as it was heartfelt, and at the centre of all the drama (both real and fictitious) was Lea Michele, who played star singer Rachel Berry.

Berry’s ambitious and over-eager personality made her something of an outcast, but her talent was undeniable. So, when news broke that Michele would be usurping the role of Funny Girl’s Fanny Brice on Broadway, gleeks new and old were transported back to the William McKinley High School choir room. It seems we’re living in a real life episode of Glee, and Rachel Berry is still the main character.

Funny Girl opened in 1964 with Barbra Streisand as the lead, but it wasn’t until this year that the show’s Broadway revival would begin with Beanie Feldstein (Booksmart; Lady Bird) playing Fanny Brice. The decision to cast Feldstein, a plus-size actor, was celebrated as groundbreaking. But her time on Broadway has been cut short.

Following lacklustre reviews of Feldstein’s performance (some argue that fatphobia played a role in this scrunity), the actor posted a cryptic message announcing her departure on July 10. “Once the production decided to take the show in a different direction, I made the extremely difficult decision to step away sooner than anticipated.”

The following day, it was announced that Lea Michele would be taking the part. It’s possibly the most meta casting of the decade — here’s why.

As the self-proclaimed best member of the glee club, Michele’s Rachel Berry had a few defining characteristics: her take-no-prisoners competitiveness, her rigid ambition and her undying obsession with Barbra Streisand’s Fanny Brice. Funny Girl’s “Don’t Rain On My Parade” was Berry’s unofficial anthem and she went on to star in a Broadway revival in the final seasons of the show. Lea Michele, too, has been itching to play Fanny Brice for years. When she posted the casting announcement on July 11, she wrote: “A dream come true is an understatement.”

Glee creator Ryan Murphy wrote Berry with Michele in mind, and throughout the show’s run, she was suspiciously good at playing the high-strung character. With Feldstein’s exit, life continues to imitate art. But it’s not just Michele’s debut in the Broadway show that feels like a Murphy-esque plotline — it’s also the departure of Glee actor Jane Lynch.

During the show’s six-season run, Lynch played Coach Sue Sylvester, a tracksuit-clad villainous gym teacher who would stop at nothing to destroy the musical group. Equal parts pure evil, walking meme and occasional hero, Sylvester embodied the chaos of Glee. Lynch, who plays the role of Fanny Brice’s mother in the Broadway production, will now be leaving the show one day prior to Michele’s arrival. Coincidence? We think not. The real-life situation mimics a scene in Glee — episode 17 of season five, to be exact — in which Sue walks out during Berry’s opening Funny Girl performance.

In Glee, Berry’s diva tendencies made her unpopular. And in recent years, the curtain has been pulled back on Michele’s similarly unflattering reputation. To recap, the actor faced backlash in 2020 when she tweeted in support of the Black Lives Matter movement, sparking several of her former co-workers to speak out about her cruelness to them.

Notably, her former Glee co-star Samantha Ware, who is Black, tweeted that Michele had made her life a “living hell” on set and accused her of “traumatic microaggressions” that made Ware question a career in Hollywood. It led to a tepid notes app apology from Michele, and since then, she’s kept a relatively low profile. Until now. On July 11, Ware tweeted in response to the casting news, saying in part that “Broadway upholds whiteness.”

Despite her meanness, Glee always sent the message that Lea Michele — err, Rachel Berry — was born for stardom, and that she was going to achieve it no matter what.  And here we are, all these years later. Lea Michele is Rachel Berry-ing. Jane Lynch is pulling an iconic Sue Sylvester stunt. And somehow, it feels like Ryan Murphy is writing the script for the whole situation. As for the viewers, we’re still living for the drama like it’s a Wednesday night in 2009.

And that’s what you missed on Glee.