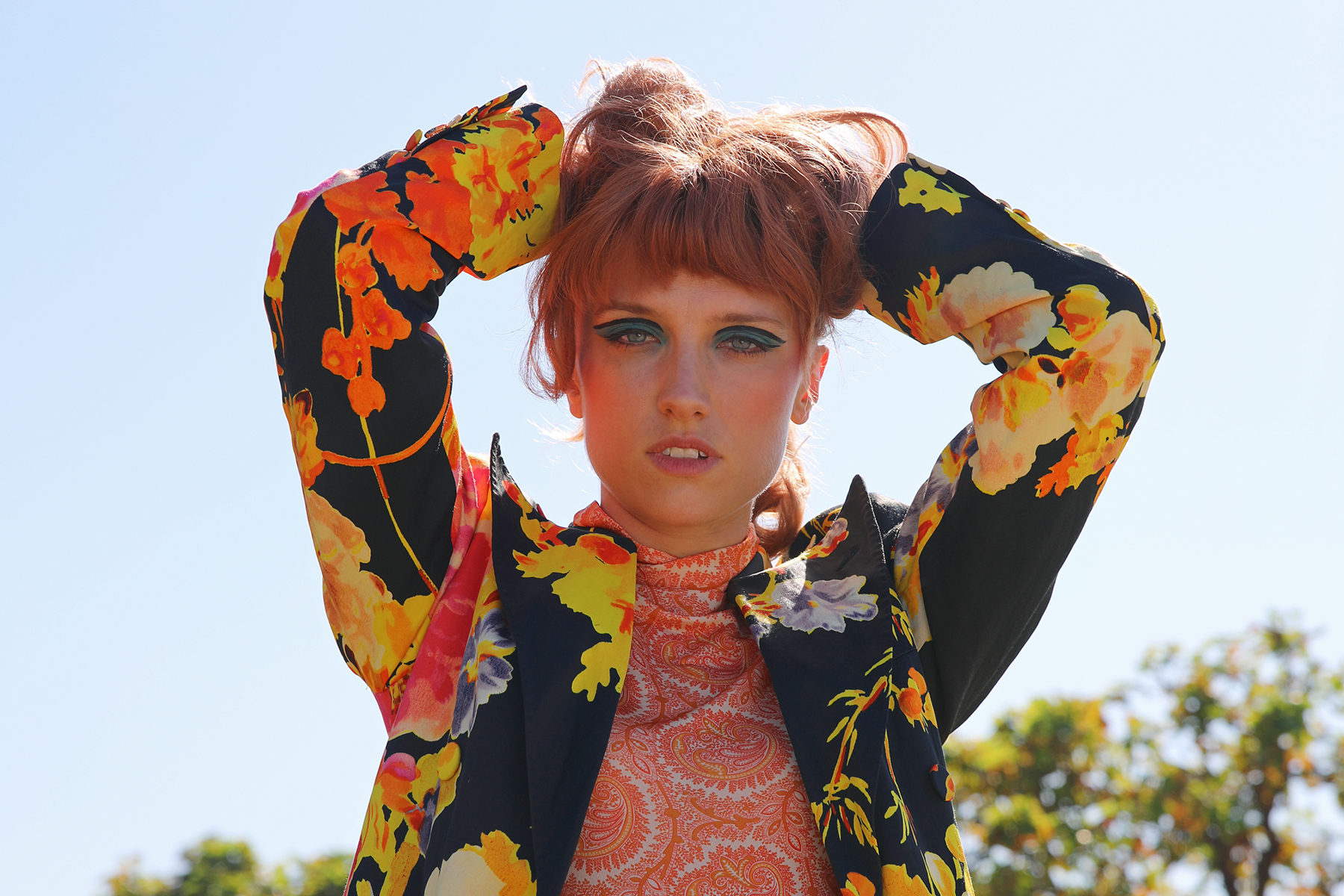 In the middle of the pandemic, in a little room in Los Angeles, Katie Alice Greer was thinking about Bruce Springsteen. Not the anthemic striver of “Badlands” or the boardwalk poet of “4th of July, Asbury Park”; the Bruce on her mind was the one from Nebraska, the bleak solo album that he’d recorded nearly 40 years earlier in a different little room on the other side of the country. “I was thinking about what that felt like for him,” she says. “It takes a certain amount of faith or confidence to go into a dark, isolated headspace and make something.”

Barbarism, the album she emerged with after 18 months alone in that room, is full of surreal language, distorted noise, and disorienting melody. It doesn’t sound anything like Nebraska — but it does sound like the existential crossroads Greer was facing when she made it.

Meet the Beatle: A Guide to Ringo Starr’s Solo Career in 20 Songs

In early 2020, when she began making Barbarism, she was reeling from the recent dissolution of Priests, the band she’d led for the past eight years in Washington, D.C. With Greer as their incandescent singer, Priests had been one of the most essential rock acts of the 2010s, playing unforgettable shows that teetered thrillingly on the edge of chaos in crowded basements and clubs that have since closed. Through their proudly independent artist-run label Sister Polygon Records, they had helped bring acts like Snail Mail, Downtown Boys, and Sneaks to a wider public; on their own records, like the 2014 EP Bodies and Control and Money and Power and their 2017 debut LP, Nothing Feels Natural, they had grown steadily from caustic punk tirades to something more complex and challenging.

By the release of their second full-length album, 2019’s The Seduction of Kansas, the ties that bound Priests were fraying. In interviews from that time, they talked about the tensions that had resulted from their relentless work ethic and upward career trajectory driving them to group therapy in an attempt to save the band. Even now, three years later, as she speaks over Zoom from a living room full of West Coast sunshine, it’s not easy for Greer to revisit that part of her life. “I haven’t talked about this a lot,” she says. “It was devastating. The band meant everything to me.”

Her mind goes back to the spring of 2019, when Priests played a show in Bloomington, Indiana. The next day, she was so dehydrated and ill that she had to rush to a hospital — a reality check that left her wondering if she’d been putting the band’s well-being ahead of her own. That fall, she went to rural Tennessee to stay with her parents for a couple of weeks and get her thoughts sorted out. “I half-jokingly tell people I had to go have a nervous breakdown, but it’s kind of not a joke,” she says. “I was really not doing well. I so badly wanted to keep the band together and make it work. I hadn’t envisioned a future where I wasn’t involved in that band.”

Feeling she’d reached a breaking point, she went back to D.C. and reached an agreement with her bandmates to put Priests on indefinite hiatus. On December 31, 2019, they played a final show in Brooklyn, giving their fans a bittersweet moment of closure. “I’ve never been married, I don’t know what divorce is like, but I have to assume it felt a little bit like that,” Greer says. “I was just so ready for the fighting and the sadness to be over.”

As 2020 began, she was getting ready to build a new life in L.A. after spending 14 formative years immersed in Washington’s music scene. “I love D.C. so much, but in some ways, it just seemed too heartbreaking for me to stay,” she says. The end of Priests had made her rethink her whole way of life there, and reconsider the choices that had left her feeling burned out: “I, very naively in my early twenties, felt like, ‘If I just throw myself and all my passion into this little world that means so much to me, it will give me what I need in return.’ But if you’re not literally thinking of your own health, it’s just not sustainable.”

Two weeks after she moved into her first apartment in California, the pandemic forced her to pause. “That created this even more emotionally intense situation for me,” Greer recalls. “On some level, I needed to close that chapter of my life — but I probably also needed to process a lot of my grief. Being in lockdown was like, ‘No, you have to sit here with all your terrible feelings and uncertainty and just deal with it.’ It was a very, very difficult first year out here, but it was necessary.”

Working in “a tiny little bedroom at the back of the apartment, the smallest possible room to be recording in,” she settled into a daily creative routine, building songs from scratch using Voice Memos, a vintage Alesis HR-16 drum machine, an old acoustic guitar that her parents bought for her at Costco when she was growing up in Michigan, a few keyboards, and everyday sounds like car alarms and eggs cracking into a mixing bowl. “It felt endless,” she says. “There were times where I wondered, ‘Am I losing my mind? Is this going to be a Shining thing where, at some point, I realize that I’m just typing, ‘All work, no play makes Jack a dull boy?’”

Instead she wound up with warped pop songs like “Fake Nostalgia,” where she starts talking about The Twilight Zone and ends up repeating “I wanna go outside” like a prayer, and “Captivated,” which spirals eerily around a single repeating piano note. On “Flag Wave Pt. 2,” her voice ripples and distorts over warm waves of synths as she reaches a moment of acceptance: “You don’t wanna be bossed around, and I don’t blame you.” Other songs fall down trap doors into haunted-sounding space or ambient guitar buzz. It’s trippy, radical, weirdly life-affirming music, like nothing else Greer has ever made.

She released Barbarism on FourFour Records, the new venture from DFA Records co-founder (and longtime Priests fan) Jonathan Galkin. “I have been trying to sign Katie Alice Greer since Priests put out their first 7-inch single in 2012,” Galkin says. “I was fascinated with that band and their talent from the beginning. They had enormous power.” After his contentious split from DFA in 2020, the pieces finally lined up for them to work together. “Katie was in this moment of reinvention,” Galkin continues. “Myself, I also was in a moment of reflection. I like to think we decided to take a risk on each other.”

When we speak, Greer sounds excited and happy about the latest turn in her career — even if she’s still adjusting to the idea of sharing her solo pandemic project with the world. “I made this record totally by myself, and I was trying to get comfortable with being as weird as possible,” she says. “I like how strange it turned out. But as it came closer to the album coming out, I felt suddenly nervous — almost in that way where you have a dream that you forgot to put on clothes. Just feeling very exposed.”

She’s working on plans to perform Barbarism live, including dates next month at Lodge Room in L.A. (Aug. 16) and Knockdown Center in Queens, New York (Aug. 21). “I want to perform,” she says. “I miss it a lot.” And she’s already thinking about her next project. “This record is probably unique, because of the circumstances in which I made it,” she adds. “I have a feeling that whatever I start recording next will sound totally different.”

Watch Kristin Cavallari Deadlift 185 Pounds Like It’s Nothing
Raymond Briggs, Author of THE SNOWMAN, Dies at 88
5 ways to improve your likability
Why the Automotive Industry Needs a More Unique Approach to Marketing
‘Bodies Bodies Bodies’ Shows Heat For A24 – Specialty Box Office