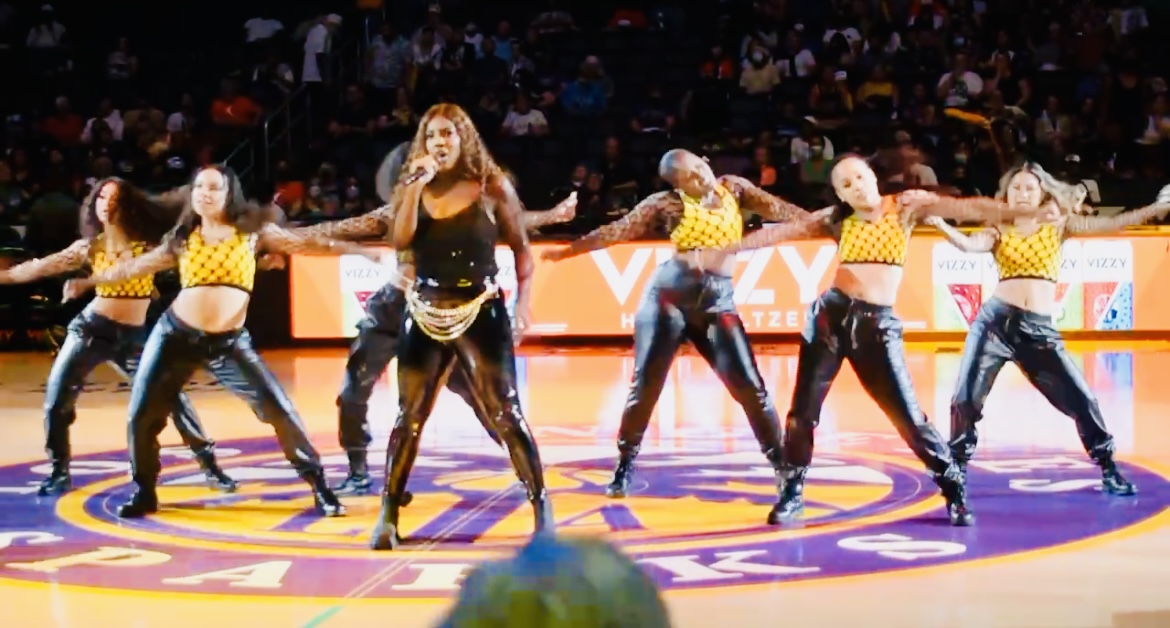 Stina Battle delivered her third live performance for the WNBA team LA Spark’s–this time
headlining as the halftime entertainer, wowing fans with her hit single “WINNING SZN.” This
performance was choreographed by hip hop dance legend Deb Moton, who was previously a
90’s hip dancer for the platinum-selling group Bell, Biv, Devoe. Stina was accompanied during
her performance by the energetic and extremely talented Spark’s dancers. The routine was
energetic, sexy, and exciting to watch. Fans and celebrities in attendance, including comedians
Leslie Jones and Adam Hunter, were fascinated by her performance. Adam took to sharing her
performance on his Instagram storyboard, while many fans followed and commented on her
outstanding performance.

The 22-year-old San Diego native, Stina was influenced by artists like Bruno Mars, Diana Ross,
and Tina Turner. Her polished sound with catchy hooks makes her tracks extremely vibey and
danceable. Born in San Diego, CA., and partly raised in Dallas, TX., her Southern roots greatly
shaped her musical influences. The young artist is already making a name for herself with her
insightful songwriting, which tackles relatable issues such as inclusivity, betrayal, evolution, and
self-awareness.

Her star is swiftly ascending; only recently did her single “Summer in Suburbs” hit over 500
thousand streams, while her feature on Alex Guesta’s song “My Addiction” peaked #4 on the
charts in Italy. Additionally, she had the honor of performing for the WNBA L.A. Sparks game at
Staples Center which was televised to more than 200,000 fans. As a vocally trained singer,
actress, dancer, and musician with a Bachelor’s Degree in Theatre, she delivers electrifying
performances every time she hits a stage.

Following in the footsteps of her late grandmother, Bettye Johnson, who performed for years
with Ike & Tina Turner all around the country, she is committed to always bringing a fresh new
sound to the music industry. Performing at the Grand Ole’ Opry and The Pink Pump Affair at
The Beverly Hilton have been two of the highlights of Stina’s career. Vocally coached by
Grammy Award-winning vocalist Darlene Koldenhoven and Mr. Willie Norwood, father of R&B
superstar Brandy, Stina is establishing herself as an artist with a throwback sound and flavor in
the music industry. With her consistent hard work and determination, she will carve out a spot
for her work to shine brightly in the entertainment industry.

Voicing the Classics: 8 Fantastic Classics Audiobooks
See the Chicks Pay Tribute to Olivia Newton-John With ‘Hopelessly Devoted to You’ Cover
Raymond Briggs, Author of THE SNOWMAN, Dies at 88
South Carolina Senator Demands Book Removal; Threatens Public Library Jobs and Funding
What Is Lewy Body Dementia, and Why Is It So Hard to Diagnose?