There were hearts aflame both nights that Colombian popetón star Karol G played New York City as part of her  $trip Love Tour — literally. The Colombian singer, who recently kicked off her second headlining tour across North America, took the stage at Madison Square Garden on Sept. 13, marking her debut show at the hallowed venue, and then went on to Brooklyn’s Barclays Center on Sept. 15. Both shows started with flames igniting the upper rungs of the heart-shaped stage and the audience cheering “BI-CHO-TA!” The woman of the hour appeared floating inside a thorny heart structure as her latest single “Gatúbela” blared over speakers. She quickly made one thing clear: She was more eager than ever to welcome fans into her world.

A band of all femmes glowed under red lights beneath her, strobes flickering slightly off the guitar player’s red-black leather jacket and enveloping black-clad backup dancers in a sensual aura. Both nights started with high-energy reggaeton and trap tracks, including Feid collab “Friki” and “Ahora Me Llama,” her early breakthrough single with Bad Bunny.

For this tour, Karol has traded in her trademark blue hair for a decidedly punk-adjacent look, donning a blazing red mane that recalls Shakira during her Donde Están Los Ladrones-era. Fans took note of the change — at one point of the MSG show, someone tossed what appeared to be a bouquet. It landed at her feet, making her jump — “Ay, me asusto”, she exclaimed. She leaned down to pick up a doll depicting Ariel from The Little Mermaid. 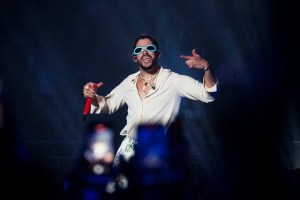 Those who might say the Medellín-born singer-songwriter’s new look is simply a pop act trying to look hard would be sorely mistaken. Karol’s setlist weaved rock music throughout, most notably on “Bichota” (which has been embraced by the genre, with a post-punk cover by Chilean band Friolento going viral). Arguably the night’s sexiest number, the familiar downtempo dembow-lite track devolved into sonic mayhem both nights, ending on a raucous series of solos from her band of bichotas on guitar, bass, keys, and turntables. As the song ended, the bassist launched into grimy renditions of “Seven Nation Army” by the White Stripes.

Karol G went all out on production. The backdrop transformed often, at times displaying encouraging typewritten messages, a lavish bar for corrido track “200 Copas”, and an entourage of digital dancers gyrating on poles in high heels. She loaded up pyrotechnics, lazers, sparks, and lights. For “Ocean,” arguably the most emotional moment of the show, a giant 3D moon appeared and began to orbit around the arena. Cellphone flashlights glowing behind it like stars, Karol danced under the moon in a glittering jumpsuit on both nights, embodying a headlining diva through and through.

For “El Makinon”, she soared through the crowd on a turquoise Ferrari elevated on steel cables. As the car made its way back to the stage and began its descent, Karol rallied the audience as the familiar organ intro of reggaeton classic “Quiero Bailar” took hold of both arenas as she launched into her track “Leyendas,” a super-sampler of reggaeton classics that features Ivy Queen, Zion y Lennox, and Nicky Jam and incorporates Alberto Stylee’s famed sample of the Eurythmics classic “Sweet Dreams.” “Bienvenidos al perreo intenso 2022!” she shouted out. It made for the most fun moment on both nights: Her dancers enveloped the car as genre classics got the crowd dancing, leaving no surface of the Ferrari left un-twerked.

Attendees at the Garden show were treated to guest appearances from Ozuna — who appeared to perform “Caramelo” and stuck around for the megahit “China” — and Maldy, who appeared to reprise “Gatúbela.” At Barclays, in lieu of guest performers, Karol brought a young fan onstage: a little girl dolled up in long nails, red extensions, and a crop top had been watching most of the show on her father’s shoulders from the pit. Whether a child should be at a show based around exotic dancer aesthetics is besides the point, but the moment was tender as Karol and her mini-G strutted the stage, danced, and high-fived.

Although not particularly lifting heavy in the dancing and vocal department, Karol G is a performer with heart: After she performed “Provenza” at the Garden, she told the crowd that she almost gave up her career. She started making music in 2006, and had once come to New York City to learn English and take music business courses. She recounted how she would sit in front of Madison Square Garden day-dreaming playing the legendary venue. In 2022, she achieved that dream.

Karol closed both nights with the Becky G-assisted hit “MAMII” and house-centric Tiësto collab “Don’t Be Shy” before an energetic encore. Before signing off at the Garden, she flashed a big smile and joined her hands in a heart toward the audience, leaving them with a kind reminder to keep the party going: “Portense bien — y portense mal,” she said as a last flourish of electric guitar and drums rounded the night to a close. “Be good — and be bad.”