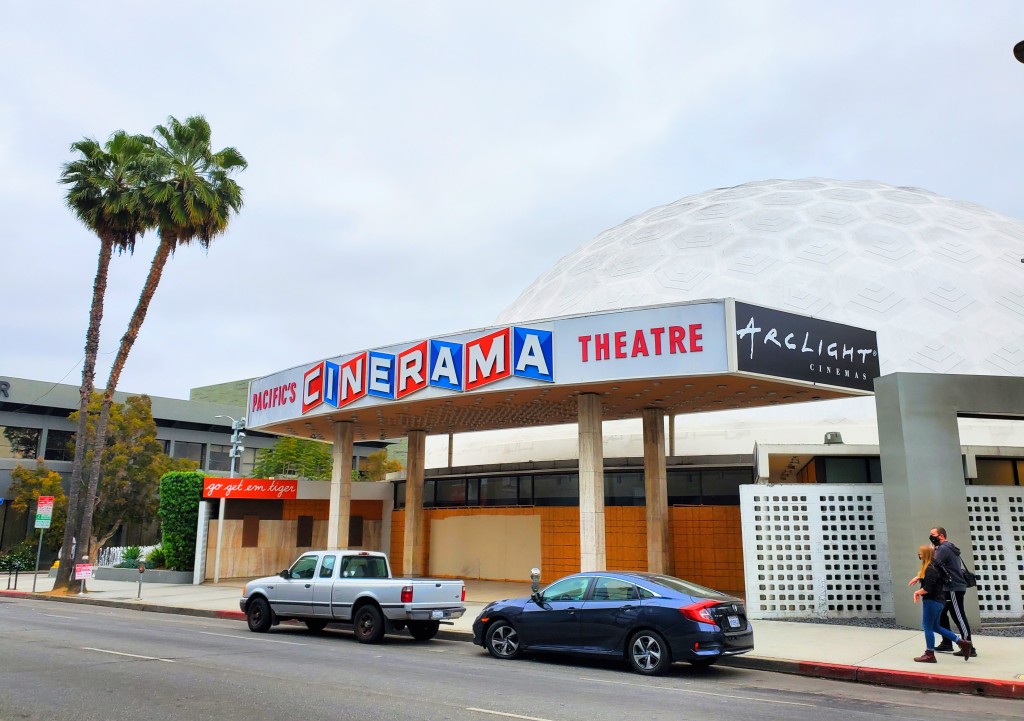 UPDATED, 8:33 AM: For those who forgot to read the news on Deadline back in December, it was never, ever in the cards for the Cinerama Dome to reopen this year. Like, never ever. 2023 was always the eyed date.

The Dome’s owners are doing a full refurbish of the venue, top to bottom. There’s no immediate reopening date yet, but it was never going to be this year. Ever. Even if they did post a liquor-license renewal outside the door. Whenever this grand historical cinema palace decides to reopen, don’t worry, you’ll see rockets’ red glare from as far away as the Valley.

PREVIOUSLY, Dec. 17: The Cinerama Dome isn’t opening anytime soon, so hold off on reserving those seats.

Despite news about the Dome’s owners renewing a liquor license at the 58-year old Sunset Boulevard movie house, Deadline has learned there is absolutely no re-opening date set for the venue. Not 2022, maybe 2023. Here’s why:

The entire Cinerama Dome and sister Hollywood Arclight Cinemas (which Decurion does own; they own the whole property, I’m informed) are in the planning stages of undergoing refurbishments. What those are exactly haven’t been set in stone, it’s still in the planning stage, but it’s going to be a while before the theater is spruced up. Those operating the structure, I hear, don’t even know when it’s reopening yet given that renovations haven’t even started. And both the Cinerama Dome and Hollywood Arclight will operate together again when reopened. The Dome can’t afford to operate as a single screen.

All the excitement this afternoon was spurred by a public notice of application to sell alcoholic beverages at the Cinerama Dome which was posted on the building’s boarded-up walls — a move noticed and posted on social media by the Save Arclight Cinemas group. The applicant is an entity called DT Operator for the business name “Cinerama.”

Also, more to the point that the Dome isn’t reopening soon: There aren’t any talks going on between Decurion film buyers and studios. No one is booking any titles.

Last April when Los Angeles cinemas were returning from being closed during the pandemic, Deadline reported on the sudden closure of the Cinerama Dome and Arclight Cinemas. A great sadness and shock broke out among moviegoers in cinephile-rich Los Angeles. And what a high note to go out on in 2019: The venue reaping over $15M at the box office in ticket sales from a banner box office year, in which the Dome itself also made a cameo in Quentin Tarantino’s Oscar-winning Once Upon a Time in Hollywood. The Arclight Cinemas shuttering involved complicated lease negotiations between the landowner and exhibitors.

In April, the decision to close the Dome seemed final. “This was not the outcome anyone wanted, but despite a huge effort that exhausted all potential options, the company does not have a viable way forward,” Decurion wrote at the time, adding “To our guests and members of the film industry who have made going to the movies such a magical experience over the years: our deepest thanks. It has been an honor and a pleasure to serve you.”

In June, Pacific Theatres Exhibition Corporation filed for Chapter 7 bankruptcy. Many of the previous Arclight leases have gone to other chains, i.e. AMC nabbed the Grove in LA and Americana at Brand in Glendale, with Regal taking the Sherman Oaks location. But the Forman family, which operated Arclight and Pacific, held on to their crown jewel, the Hollywood Arclight and Cinerama Dome site.

The Cinerama Dome houses the largest contoured motion picture screen in the world, measuring 32 feet high and 86 feet wide. The concrete geodesic dome is made up of 316 individual hexagonal and pentagonal shapes in 16 different sizes, with each of the pieces about 12 feet across and 7,500 pounds.

Deadline has reached out to Decurion about this afternoon’s murmurs, which did not respond to a request for comment.

Why Your Diversity & Inclusion Strategy Is Not Working
Nurse Ratched Actress Louise Fletcher Dies In Her Sleep In France
The Bullet That Missed
Tennis Great Roger Federer Confirms He’s “Definitely Done” With Professional Tennis
Live Q&A with iPEC and the ICF | September 14, 2022