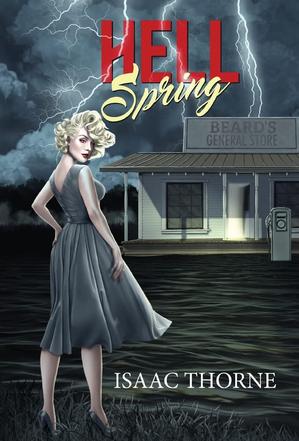 The story mostly takes place on and around March 21, 1955, in the town of Hollow River during a torrential thunderstorm. Eight people seek shelter in a store called Beard’s General, and in this conservative, religious town, everyone’s beset by secrets, guilt, and shame. There’s Peter Mayberry, a White church musician grappling with his sexuality and in love with Sam Brooks, a younger Black man. He’s haunted by memories of his devoutly religious mother’s disapproval and extreme physical abuse. Eli Wynn is an adolescent who’s berated for indulging his sexuality, and Jerry Beard faces the same stigma and shame from his own mother, Kathy, as she tries to keep things going at the general store. Mark MacDonald is the local pastor who commits the sin of thievery, stealing from Kathy and the church fund to make ends meet. Donna Gilliam, meanwhile, kills her husband in their home to keep her baby, Theo, safe, and stops at the store on her way to the hospital.Finally, there’s Marilyn, a beautiful, mysterious woman who washes up at the store. Many of the characters grapple with their sins and shame, but one is a gruesome predator, feeding upon their guilt to stay alive. The group must band together or get washed away—both literally and figuratively. Thorne’s book relies on Christian themes of salvation, absolution, and apocalypse to further the plot, with suspense revolving around whether people can overcome their personal demons to face a greater one together. The story ends on a note of reconciliation and peace as well as an afterword reflecting on real-life disasters that inspired the book’s events, such as flooding in Mississippi. His messages regarding judgement, shame, and guilt come through strongly and hit with great force. The prose can be tedious at times, though, with gratuitous, graphic descriptions of sexual violence and an excess of sexual metaphors. Still, Thorne fleshes out each character’s backstory in measured detail, making them problematic and relatable, by turns.