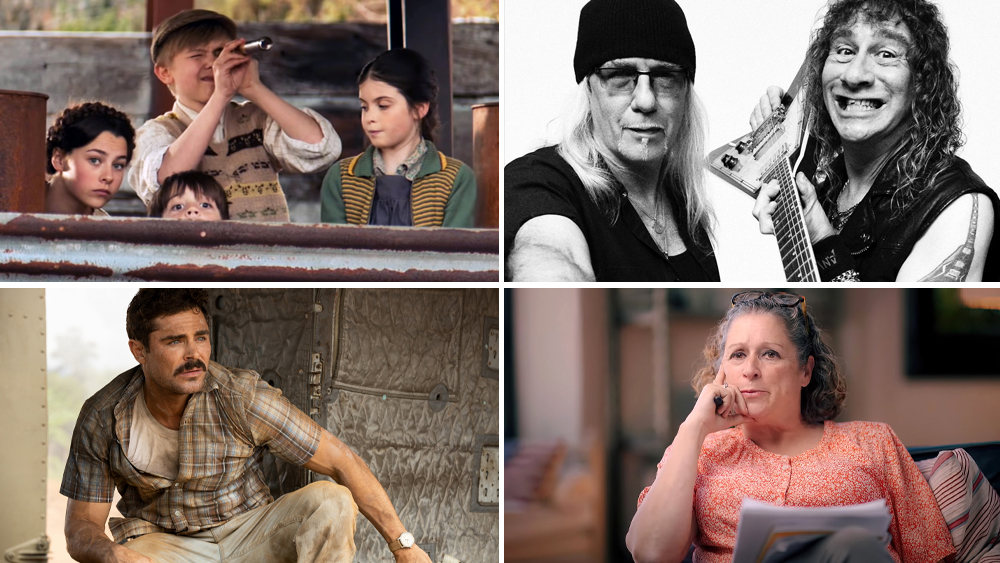 The sequel to a beloved British family film, a heavy metal re-release, an Apple title from TIFF and Abigail Disney’s takedown of the American Dream populate the specialty film weekend in a market that may have found sturdier footing ahead of awards season and amid a dearth of blockbuster fare.

“I think there’s a lot we should be celebrating,” said Kyle Greenburg, marketing and distribution chief of Utopia. Its release, with Abramorama, of the latter’s restored 2009 doc Anvil!: The Story of Anvil rocked a $16K gross, or $8K per screen, from two single-show premiere events ahead of a one-day run coming Tuesday on 200 screens including AMC and Regal theaters and top arthouses. It played Thursday night in LA at the Saban Theatre, with Anvil performing live alongside Scott Ian of Anthrax, followed by a Q&A moderated by Steve-O. Last week, Peter Dinklage hosted a screening at NYC’s Angelika with director Sacha Gervasi.

The doc follows the Canadian heavy metal band as it delivers its influential 1982 album Metal on Metal that would inspire the likes of Anthrax and Metallica, then dropped off the map to begin what would become decades of toiling in obscurity. Gervasi, in his debut feature, followed guitarist Steve “Lips” Kudlow and drummer Robb Reiner as their roadie, capturing their story as they stumble through a harrowing European tour. Features appearances by heavy metal icons including Ian, Metallica’s Lars Ulrich, Guns N’ Roses’ Slash, Motörhead’s Lemmy and Slayer’s Tom Araya.

Speaking of music docs, Neon’s David Bowie opus from Brett Morgen, Moonage Daydream, expands to 733 screens this week after a great opening. Sony Pictures Classics just announced that Hallelujah: Leonard Cohen, A Journey, A Song from July has crossed $1 million at the domestic box office, for a total of over $1.2 million globally.

This weekend: Blue Fox Entertainment’s Railway Children, inspired by the family film of the early 1970s, opens on 900+ screens. Directed by Morgan Matthews, written by Danny Brocklehurst, based on a treatment by Jemma Rodgers. Stars Jenny Agutter, Sheridan Smith and Tom Courtenay. Set in 1944 as WWII life in Britain’s cities becomes increasingly perilous, three evacuee children are sent to a Yorkshire village. Settling into country life, they’re thrust into a dangerous quest when they discover an injured American soldier hiding out in the railyard.

Quiver Distribution presents Bandit on 100 screens. Directed by Allan Ungar, written by Kraig Wenman. Stars Josh Duhamel as a charming career criminal who escapes from a U.S. prison in Michigan and crosses the border into Canada, where he assumes the identity of one Robert Whiteman. After falling in love with Andrea (Elisha Cuthbert), a caring social worker he can’t provide for, he turns to robbing banks and discovers that he’s exceptionally good at it. Addicted to the rush and money that provides his double life, Robert turns to loan shark and reputed gangster Tommy Kay (Mel Gibson) for bigger opportunities. But a ruthless detective (Nestor Carbonell) will stop at nothing to bring him down.

Fresh from TIFF, Apple is opening Peter Farrelly’s The Greatest Beer Run Ever on three screens in LA, NYC and Dallas, expanding next week. With Zac Efron, Bill Murray, Russell Crowe. Deadline review here. In Farrelly’s first film 2018’s Green Book, Efron is Chickie Donohue, looking to support his neighborhood friends serving in Vietnam by doing something outrageous — traveling to the frontline by himself to bring the soldiers a little piece of home, their favorite can of American beer. On the way he confronts the reality of war, reunites with childhood buddies and is thrust into the complexities and responsibilities of adulthood. Based on a true story. Written by Farrelley, Brian Hayes Currie, Pete Jones.

(Noting Netflix’s Blonde expands to 50+ theaters in 25+ cities in the U.S. and Canada including the Paris, Quad, Nitehawk Prospect Park and Cinema Arts Center in NY; the Bay, Landmark Nuart, Los Feliz and Laemmle Monica in LA; and the TIFF Bell Lightbox in Toronto. The streamer’s A Jazzman’s Blues by Tyler Perry continues in around 10 theaters in seven cities including the Landmark Westwood and the Bay in LA.)

Documentaries: Abigail Disney and her Fork Films are out with The American Dream and Other Fairy Tales on a dozen screens. The doc, which world premiered at Sundance, looks at America’s dysfunctional and unequal economy and asks why the American Dream has worked for the wealthy but is a nightmare for people born with less. An often vocal critic of the company that her grandfather Roy Disney helped found with his brother Walt — her great uncle — she uses her family’s story to explore systemic injustice. Disney directed with Kathleen Hughes.

Greenwich Entertainment presents Buried: The 1982 Alpine Meadows Avalanche on eight screens in the Bay area, Reno and Tahoe — markets nearest the ski area that was the site of the third biggest avalanche in U.S. history, on the Alpine Meadows Ski Resort in Lake Tahoe. It triggered a desperate five-day search for eight missing people. The film by Jared Drake and Steven Siig chronicles the avalanche, the miraculous rescue efforts and the traumas that still haunt the survivors today. Expands to 50 runs next week, largely in top mountain markets including Boise, Salt Lake City and Boulder.

Soilsiú Films presents Young Plato by Neasa Ní Chianáin and Declan McGrath (School of Life) in NYC (Angelika Film Center) and Boston (Dedham Community Theater) with a regional expansion next week including D.C., Dallas, San Diego, Sacramento, Plano, TX, and Fairfax, VA. Follows the dream of Elvis-loving school headmaster Kevin McArevey, a maverick determined to change the fortunes of an inner-city community plagued by urban decay, sectarian aggression, poverty and drugs. His all-boys primary school in post-conflict Belfast, Northern Ireland, becomes a hot house for questioning violence, as the headmaster sends his young wards home each day armed with the wisdom of the ancient Greek philosophers. The boys challenge their parents and neighbors to forsake the prejudice that has kept this low-level civil war on the boil for decades.

Elsewhere in specialty: Screen Media presents Richard Hughes The Enforcer with Antonio Banderas in 10 locations. Also starring Kate Bosworth, Mojean Aria, Zolee Griggs and Alexis Ren with 2 Chainz. Banderas is Miami’s top mob enforcer, who sacrifices it all to tear down the criminal organization he’s spent his whole life building up after discovering his boss (Bosworth) is putting a young runaway’s life in grave danger.

Good Deed Entertainment presents Carmen by Valerie Buhagiar on five screens (NYC Cinema Village, LA Laemmle Monica, Chicago, Detroit, San Francisco and Columbus). Starring: Natascha McElhone, Michaela Farrugia, Steven Love. In a sun-dappled village in Malta in the 1980s, McElhone is a 50-year-old woman finding romance and a new start in life after years of servitude. In Malta, it’s tradition for a younger sister to devote her life to the church when an older brother enters the priesthood. Inspired by true events.

AMC+ and RLJE Films present Section 8 on five screens and AMC+. By Christian Sesma, starring Ryan Kwanten, Dolph Lundgren, Dermot Mulroney, Scott Adkins and Mickey Rourke. After avenging the murder of his wife and child, a former soldier is sent to prison with a life sentence. He’s given a shot at freedom when a shadow government agency recruits him for an off-the-books assignment, but he soon realizes Section 8 isn’t what it seems.

‘Top Gun: Maverick’ Flying Back To Theaters
Burn Out Your Legs and Glutes With This 20-Minute Cardio Circuit
11 Punny Mugs for Language Lovers
The biggest paperback releases of 2022
More than 150 Literary Agents Sign Letter to Support HarperCollins Workers’ Strike