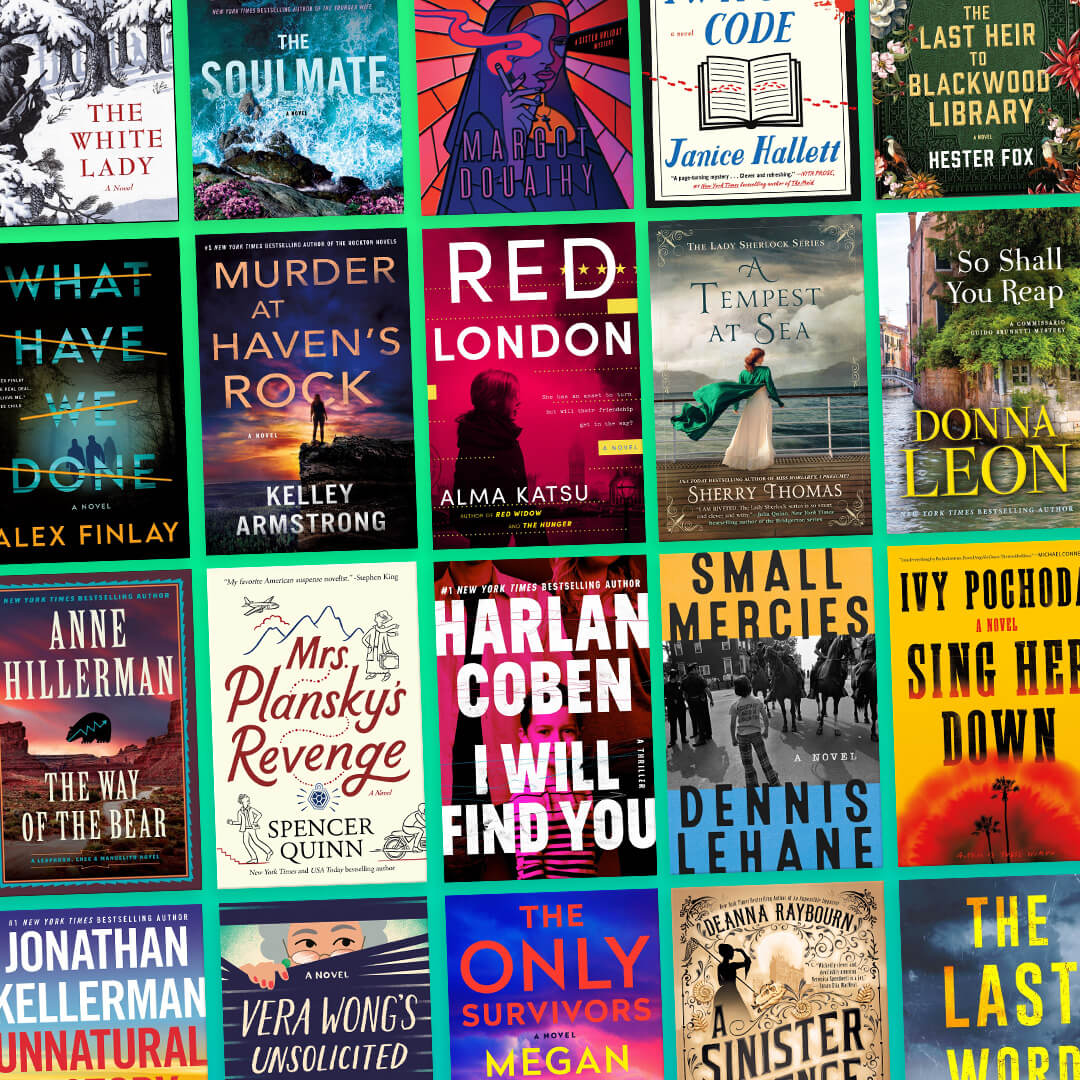 A mystery told through iPhone voice transcripts, Jacqueline Winspear’s first standalone novel in nine years and the very first release from Gillian Flynn’s new imprint: 2023 will be a year for the record books when it comes to mystery and suspense.

The Twyford Code by Janice Hallett

Janice Hallett’s debut mystery, The Appeal, used emails, texts and letters to track a drama club tearing itself apart—to the point of murder. For her next trick, Hallett tells a story entirely through fictional audio transcripts, voice notes recorded by Steven “Smithy” Smith as he tries to unravel the secrets of a mysterious children’s book and its connection to the disappearance of his former English teacher.

After a couple of standalones, Jane Harper returns to Aaron Falk, the sleuth who starred in her first two mysteries. Aaron is searching for a woman who vanished one summer night, leaving her baby tucked safely inside a pram, and his investigation may reveal terrible truths about his best friend and his best friend’s family.

Milo Sturgis and Alex Delaware’s latest case delves into sticky questions of art, exploitation and activism as they hunt for the murderer of a wealthy photographer whose portraits of homeless people may have resulted in his death.

The Cliff’s Edge by Charles Todd

Nurse Bess Crawford is still adjusting to life after World War I and considering whether she has deeper feelings for her friend, Simon Brandon. But that task becomes even more difficult when she is drawn into a vicious family feud in the Yorkshire countryside with unforeseen consequences for the people closest to her.

Kelley Armstrong’s bestselling Rockton series has one of the most creative premises in mystery fiction: The secret town of Rockton exists completely off the grid in the Alaskan wilderness, the perfect place for criminals, fugitives and anyone in need of a second chance. In this spinoff series, Rockton’s erstwhile police chief, Casey Duncan, is building a second town to improve upon Rockton’s success—and then a body is discovered in the woods outside the worksite.

Even if poet Margot Douaihy’s debut mystery weren’t the first book released under Gone Girl author Gillian Flynn’s imprint, we’d still be itching to get our hands on it. A whodunit set in New Orleans starring a queer, chain-smoking, tattooed nun? Send it to us immediately.

What Have We Done by Alex Finlay

The acclaimed author of Every Last Fear and The Night Shift is back with another tale of past horrors reaching into the present. Five former residents of Savior House, a group home for teenagers that was shut down 25 years ago after the disappearances of some of its inhabitants, reunite after someone begins hunting them down.

A Sinister Revenge by Deanna Raybourn

Beloved Victorian sleuths Veronica Speedwell and Stoker Templeton-Vane return in their eighth adventure. This time, they’re trying to save the life of Stoker’s brother Tiberius, whose group of friends are being stalked and killed for reasons unknown. In a move that will especially please historical fiction fans, Tiberius plans to hold a house party at his ancestral estate to lure the killer out of hiding. If drama is what you seek, a house party is where you will surely find it.

I Will Find You by Harlan Coben

Harlan Coben is one of our greatest living thriller writers, and instantly engaging hooks like the one in I Will Find You are a big reason why. To wit, David Burroughs didn’t kill his son, Matthew, but he was convicted and is now serving a life sentence for the terrible crime. When he receives evidence that Matthew is still alive, he has no choice but to break out of prison to clear his name and find out what actually happened.

Well-known for her historical horror novels, Alma Katsu is also the author of espionage thrillers inspired by her previous career as a senior intelligence analyst. Red London will reunite readers with Red Widow’s Lyndsey Duncan, whose latest mission is to ferret out Russian assets in London.

So You Shall Reap by Donna Leon

There’s something of a holy trinity of wholesome, modern male sleuths. Louise Penny’s Inspector Gamache, Martin Walker’s Benoît “Bruno” Courrèges, Chief of Police and Donna Leon’s Commissario Guido Brunetti are all cultured, empathetic, complicated detectives who solve crimes while enjoying lives that fill readers with envy. Of late, Leon’s been giving readers snippets of Guido’s past, and this latest investigation is no different: The murder of a Sri Lankan man, found in one of Venice’s canals, has a startling connection to Guido’s student days.

Jesse Q. Sutanto, the bestselling author of Dial A for Aunties, returns with a mystery sure to please fans of The Thursday Murder Club and all the similarly clever tales starring older characters that followed in its wake. When Vera Wong finds a dead body in her tea shop, she decides to embark on her own investigation by closely observing her customers, certain that the man’s killer will eventually return to the scene of the crime.

A Tempest at Sea by Sherry Thomas

The Lady Sherlock series is one of the best spins on the Sherlock Holmes canon and a wonderful historical mystery series in its own right. Sherry Thomas’ saga follows Charlotte Holmes, a brilliant detective who solves crime while pretending to be her fake brother Sherlock’s assistant, and in this seventh installment, she is on the hunt for an important dossier aboard the RMS Provence. Of course, someone is murdered on the ship, but Charlotte must hold back from solving the crime in order to continue her search for the dossier (and protect her identity—she’s recently had to fake her death, you see). Does Charlotte stand a chance at resisting such a tantalizing case? Most likely not.

The White Lady by Jacqueline Winspear

After 17 acclaimed historical mysteries starring British sleuth Maisie Dobbs, Jacqueline Winspear is introducing a new character for her fans to adore. The White Lady follows Elinor White, a 41-year-old former spy living in a small English village in 1947. When her neighbors are threatened by a powerful gang, Elinor will have to call on all her training to protect her new life.

The Last Heir to Blackwood Library by Hester Fox

If you love gothic novels, you probably already know and love the deliciously gloomy work of Hester Fox. Her fifth book takes place after World War I and follows Ivy Radcliffe, a woman who is shocked to learn that she’s inherited a crumbling estate in Yorkshire that contains an epically creepy library.

The Soulmate by Sally Hepworth

Sally Hepworth’s 2022 thriller, The Younger Wife, was a marvelous combination of complicated character dynamics and soapy thrills a la Big Little Lies. So there are high hopes for her next novel, which will take on a time-honored trope of female-driven suspense novels: What if my perfect, beloved husband was actually a murderer?

The Only Survivors by Megan Miranda

Bestselling thriller author Megan Miranda’s latest novel follows a group of former classmates who all survived the same tragic event. As they gather to mark the 10th anniversary of the incident, one of the classmates disappears. Knowing Miranda, the plot will be perfectly constructed, the characters endearingly spiky and the twists shockingly prescient.

The Last Word by Taylor Adams

Taylor Adams hit it big with No Exit, which is now a movie on Hulu, and topped himself with the superb Hairpin Bridge. The Last Word’s premise will be hilariously, uncomfortably familiar for any book lovers who are perhaps . . . a bit too online. A woman who posts a negative review of a famous author’s latest horror novel gets into a fight with said author on the internet—and then disturbing incidents start happening around her isolated home.

The Way of the Bear by Anne Hillerman

Tony Hillerman’s Leaphorn & Chee mysteries are finally getting the prestige TV adaptation they deserve in AMC’s “Dark Winds,” which means a whole new audience will find their way to Anne Hillerman’s continuation of her father’s work. Her eight installment will see Jim Chee and Bernadette Manuelito investigating two mysterious deaths that seem to be tied to the Bear Ears area, one of the most beautiful places in the Navajo Nation.

For You and Only You by Caroline Kepnes

America’s favorite stalker is back, and he has another outrageously named woman to hunt. The new love of Joe Goldberg’s life is named Wonder, the setting is Harvard University, but Joe himself will never change. Thank goodness.

It’s been six years since the acclaimed author of Mystic River and Shutter Island released a new novel, and Small Mercies sounds like a doozy. Set in Boston in 1974, this suspenseful novel will follow Mary Pat Fennessey, whose search for her missing daughter sets her on a collision course with the Irish mob as the city teeters on the brink of violence over the desegregation of its public schools.

Sing Her Down by Ivy Pochoda

Ivy Pochoda’s new thriller sounds like a Western version of “Killing Eve,” which is something we never knew we needed but now need desperately. It follows two incarcerated women, one of whom insists that the other isn’t as innocent as she pretends to be, sparking a deadly game of cat-and-mouse.

All the Sinners Bleed by S.A. Cosby

S.A. Cosby never shies away from the darker corners of crime fiction, exploring morally gray characters and challenging situations with a humane, clear-eyed intelligence. His next book will be no different: All the Sinners Bleed follows Titus Crown, the first Black sheriff in a small Southern town who must reckon with all the contradictions of his position when a teacher’s murder uncovers a tangle of corruption, crimes and secrets.

Spencer Quinn has already gifted readers with the Chet & Bernie series, which follows a PI and his German Shepherd as they solve crimes and enjoy being each other’s best friend. (It is exactly as adorable as it sounds.) But now he’s starting a new series that could become just as beloved: Mrs. Plansky’s Revenge will be the first adventure of Loretta Plansky, a widow in her 70s, who, after losing her savings to a scammer pretending to be her grandson, sets out to track him down and recover her funds.

Laura Lippman’s novels combine careful plotting with extremely messy character behavior, resulting in singularly page-turning reads. True to form, her latest thriller begins with a plot straight out of the trashiest of tabloids: When she was a teenager, Amber Glass was accused of killing her baby on prom night after her date, Joe Simpson, abandoned her. With something like that in your past, you’d get the hell out of dodge too. So why is Amber back in town, and why are she and Joe circling each other once again?

The author of Clark and Division, one of our best mysteries of 2021, returns with Evergreen, her second Japantown Mystery. It’s 1946, and Aki Ito and her family have finally returned to their home in Los Angeles after being incarcerated in a detention center and resettled in Chicago. Aki’s next case puts her in an extremely delicate position: Her husband’s best friend, Babe Watanbe, is suspected of elder abuse, and it turns out that’s only the tip of the iceberg when it comes to the potential crimes of the Watanabes.

Why You Need to Develop Your Website’s Content and Design in Tandem
Why Founders Get Trapped in a Lifestyle Business
Does TikTok’s “Lucky-Girl Syndrome” Actually Work?
A memoir so revealing, it had to be written anonymously
John Lydon and Public Image Ltd. Lose Bid to Represent Ireland at Eurovision