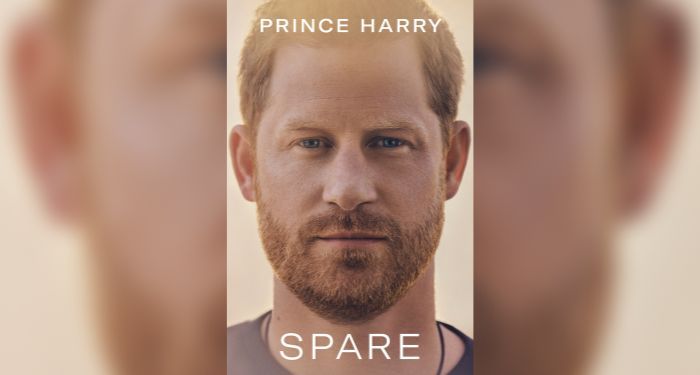 My entry into the British monarchy was probably the same as for most millennials—the death of Princess Diana. I remember where I was (on my basement sofa, really drowsy) and who told me (some neighbor kids I played with sometimes) and how I felt (sorry for them because their father was British). I remember seeing pictures of the princes following their mom’s coffin. I remember Prince William’s brief cultural moment as a heartthrob. Later on, I remember seeing the headlines about Harry in my mother’s (American) tabloids.

Prince Harry and I have only one thing in common — the loss of our mothers. I will not critique the ways in which he has grieved or how he has or has not canonized his mother in his mind. I think it’s very clear that he did not receive a normal level of emotional support from anyone in his family following the loss of Diana. I highly recommend the interview he did with Stephen Colbert. Before we really get into the weird things about Harry’s memoir, one thing that was not weird to me about this book was the way that people who had also lost their mothers reached out to Harry, even later in his life — Tyler Perry lent him an entire house! Motherless kids have to stick together.

However, there were some stories in Spare that made me blink a little. This is your letter to the world and you are telling us…this? Of course I support Prince Harry’s right to tell his story in whatever way he sees fit. He worked with a famous ghostwriter on this book (which sounds like an oxymoron but the guy had a movie made about him.) Overall, I think we could all do with fewer secrets, fewer lies we tell ourselves about ourselves and where we come from. Here are my favorite “oh, uh, wow” moments from Spare.

Harry’s Not a Reader

From referring to Lenny and George from Of Mice and Men as “two blokes,” to his snarky reasoning behind why he’s never been able to get into Hamlet, Harry does not present himself to be the family brain. My favorite moment was when he quotes Faulkner and admits that he found the quote on BrainyQuote.com and didn’t actually know who Faulkner was. In a world that can be dismissive of people who are honest that reading just isn’t their thing, it’s a bold move.

True Story Newsletter
Sign up for True Story to receive nonfiction news, new releases, and must-read forthcoming titles.
Thank you for signing up! Keep an eye on your inbox.

This moment went a little bit viral: Harry describes a case of penile frostbite he suffered following a trip to the North Pole. This was memorable not only because getting frostbite on one’s penis is obviously not something anyone is ever likely to forget but also for the fact that I came away from this chapter firmly believing that he used the word “todger” every six words. It was, in fact, only used six times in seven pages, but it’s unusual enough, at least to an American ear, that it sticks out.

King Charles and the Teddy Bear

I said that I wasn’t going to critique anyone’s coping mechanisms and I am not. King Charles lived apart from his mother as a child, was bullied at school, and if his only friend was a stuffed animal? It makes him slightly more likable in my eyes that he’s held on to that friend. This fact does not make me like Harry’s father any more than I did before, but it did humanize him as someone who did not have an easy childhood and did not acquire the tools to help his own children in theirs.

When Harry Got “Blooded”

The scene in which Harry went on a deer hunt at Balmoral and the palace staff member who was with him pushed his face inside the deer’s carcass? I was not prepared.

What’s in a name?

Charles and Camilla supposedly wanted Catherine to change the spelling of her name so that there weren’t too many C names in the family. I get protecting a brand, but that’s taking it a little bit far. If I were a British tabloid, I would wonder about Catherine going on to name her own daughter Charlotte…

In further “oh, you’re going to tell us about that?” Harry’s description of the young teachers helping the boys bathe at school and how that was the sexual awakening for many a pupil. As someone who attended an American public school, any and all boarding school stories are eye-opening…but Harry’s were next-level.

Harry sees himself as a Chandler. I suppose it was a little bit surprising to see him living the same 1990s and 2000s as the rest of us, except for the constant threat of being exposed or lied about by the paparazzi. There’s also a moment later in the book in which he’s in Courteney Cox’s house, high on mushrooms, and her toilet speaks to him.

The Bee, The Wasp, and The Fly

Harry uses nicknames for a lot of people outside of the royal family. The ones I was most interested in were the Bee, the Wasp, and the Fly, men who had “exceedingly British names” and worked for his grandmother and his brother. Maybe it’s because I stopped watching The Crown when it came out that Matt Smith was being paid more than Claire Foy, but I was unfamiliar with these highly placed staff members who run the show behind the scenes.

“Is this the Bad Place?”

I was surprised by moment Harry began to muse about cults and wondered whether the monarchy was actually a death cult given the tombs filled with dead people and the hereditary succession. I did not expect him to go that far in his deconstruction of what monarchy is.

I am not at all surprised that Harry would visit a psychic to be connected to his mother. I am not judging him at all. I just want the psychic’s phone number. I don’t care if it’s debatably real, we all deserve magical psychic wish fulfillment.

Despite all of the leaks and the pre-publication memes, I felt like Spare was well worth reading. It’s just one side of the story, but it’s perhaps the only version of this particular story we are likely to get from a source who doesn’t insist on being unnamed. There’s something to being willing to put one’s name on something, even if it also becomes a story about one’s frozen todger.