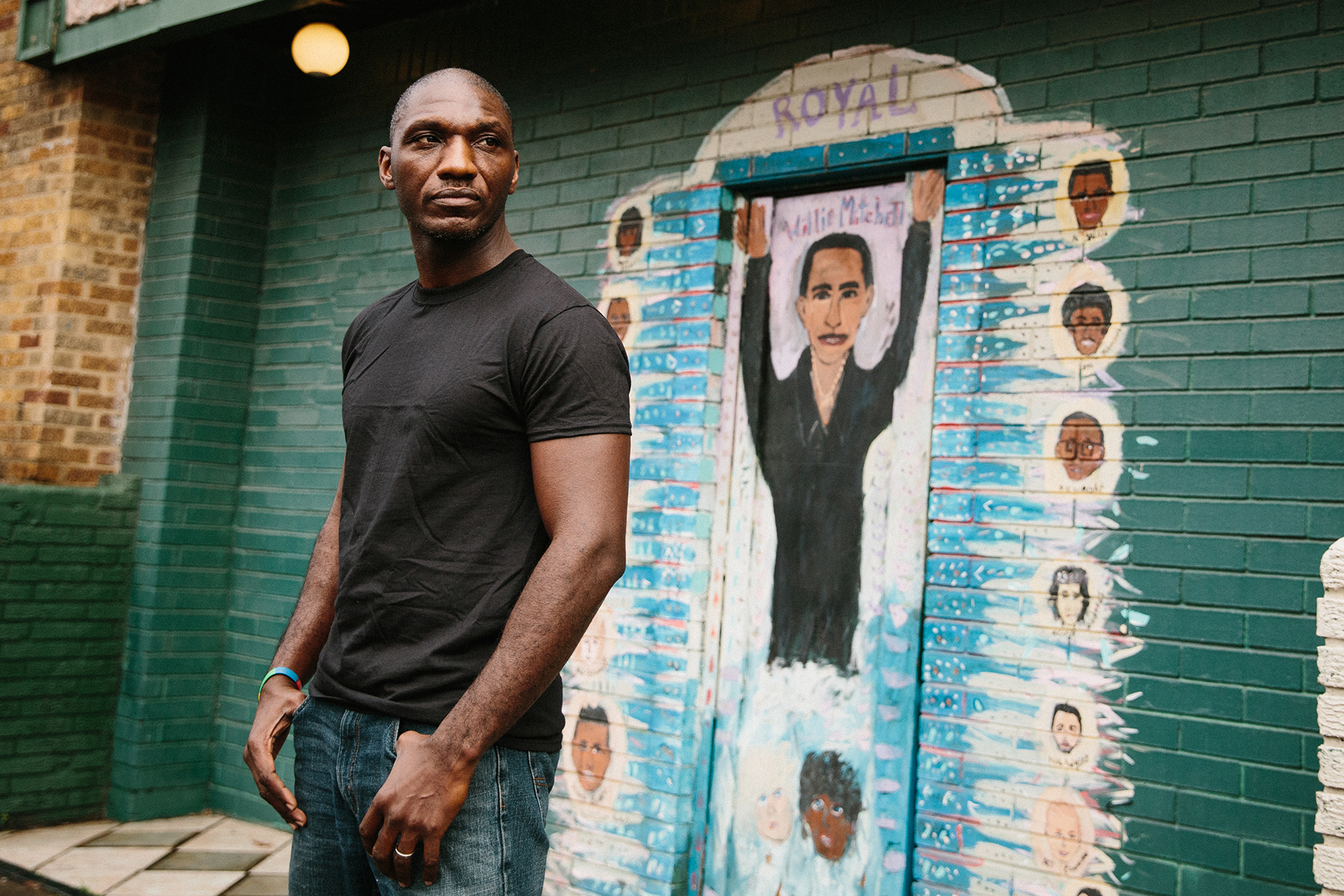 A few years ago, Cedric Burnside was sitting with his acoustic guitar on the front porch of his home in Ashland, Mississippi, listening to the birds and thinking about grief and perseverance. For Burnside, the prior decade had been one of mourning and recovery; in 2012 he’d lost his brother, fellow musician Cody Burnside, at the age of 29, before losing his father, drummer Calvin Jackson, in 2015, and his mother, Linda Burnside, two years later.

“When my mom passed, I cried,” says Cedric. “When my brother passed, I cried. That’s what we do when people leave this world. But you don’t just keep crying. At some point you have to stop crying and know that regardless of what happened, and how bad it is, you got to keep going.”

All-Star Blues Tribute to B.B. King Will Be Livestreamed

The song that resulted from that feeling of resolve was “The World Can Be So Cold,” the plain-spoken acoustic-blues opener of Burnside’s stark yet deeply resonant new album, I Be Trying, out June 25th.

If in 2021 north Mississippi hill-country blues is often seen as a relic of a bygone era, for Burnside, 42, it’s very much an evolving, present-tense practice. I Be Trying finds the singer-songwriter reworking and reinvigorating that tradition, with a focus on clear-eyed self-inventory. It’s an album full of admissions of guilt, meditations on past mistakes, and, as its title suggests, imperfect, ongoing attempts at self-betterment.

As the grandson of north Mississippi blues legend R.L. Burnside (Cedric calls him “Big Daddy”), Cedric Burnside has been recording, touring, and playing in a series of bands since he was 13, when he became R.L.’s touring drummer. But it wasn’t until 2018, when Cedric released Benton County Relic, that he felt like he was able to record and perform original music entirely on his own terms. That record earned Burnside his second Grammy nomination and established him as a commanding contemporary singer-songwriter. (Earlier this week, Burnside became a recipient of the prestigious National Heritage Fellowship from the National Foundation of the Arts, joining the ranks of American folk legends like Mavis Staples, Ralph Stanley, and Shirley Caesar.)

Burnside goes even further on I Be Trying, an urgent statement on salvation and spirituality that draws from folk, roots rock, and of course, the hill-country blues of his grandfather, who helped pioneer the subgenre’s minimalist approach and unconventional sense of rhythm. The album arrives at a moment when the hill-country sound has recently received a high-profile spotlight with the release of the Black Keys’ Top 10–charting covers album Delta Kream, which honors that tradition and includes two R.L. Burnside songs on its track list.

Growing up in a legendary musical family like the Burnsides didn’t exempt Cedric Burnside from the rural poverty of north Mississippi in the late 20th century. “I have been hungry,” says the songwriter, who sings about his difficult childhood in “Step In,” the album’s lead single, and one of its most powerful offerings. “I have been at home waiting on my momma to hitchhike home to bring us back some food. And it took a while for her to do it.”

After touring with his father as a teen, Burnside played drums on a series of Burnside family albums, like Uncle Duwayne Burnside’s 1998 release, Live at the Mint. Starting around 2006, Cedric began releasing albums himself in various configurations, as the Cedric Burnside Project, in a duo with Uncle Garry Burnside, and in pairings with fellow blues guitarists like Lightnin’ Malcolm and Bernard Allison.

Burnside played guitar in addition to drums on many of those albums, but it wasn’t until he began writing more fully on the guitar in recent years that he was able to fully carve out his own style.

“I really love to be myself,” says Burnside. “And the reason I say that is because all the times before Benton County Relic I always collaborated with other musicians. Before I got really focused on guitar, I wrote my music from the drums, or I just had it in my head, so I’d always have to show another guitar player what I had in my head. Now I play what I have in my head. …

“A lot of stuff in my head can be really unorthodox, off the beaten path,” he adds.

Burnside says the most musically unorthodox moment on I Be Trying is actually his recording of R.L. Burnside’s “Just Like a Bird Without a Feather,” one of two covers mixed in among the album’s 10 originals. It took Cedric four months to master his grandfather’s left-field guitar rhythm. “I wanted to do it close to how he played it,” says Burnside, “because, to me, that was the whole meaning of the song.”

Elsewhere, songs like “Love Is the Key” and the title track show the ways in which Burnside’s musical legacy is a mere starting point for his own contemporary craft. For the former, a song Burnside wrote in Memphis shortly before the sessions, the singer-songwriter set his lyrics about compassion and forgiveness to a sped-up variation on the chords of Junior Kimbrough’s “Meet Me in the City.” On “I Be Trying,” an unsparingly honest song about the messy process of admitting one’s own flaws, Burnside enlisted Portrika to sing with him in the studio.

“For [her] to come into the studio with Pops, it made me proud. Made me happy,” says Burnside. “We sing a lot together. We’ll just sit around and I’ll play the guitar, and we’ll just really come up with whatever pops in our head.”

Providing musical mentorship for the next generation of his family is only one of the ways Burnside remains committed to preserving the legacy of his grandfather, and more broadly, of the blues as a whole. Some, including the Black Keys’ Dan Auerbach, have expressed doubts about the genre’s future.

“All these guys, my Big Daddy, Junior Kimbrough, Othar Turner, Ms. Jessie Mae Hemphill, to me, they will always be successful. … It don’t have to be all about money.”

“It’s dire, young people don’t really give a [expletive],” Auerbach recently told The New York Times when asked about the future of the music, and who might be in control of its legacy moving forward. “But at the same time, were these guys ever truly successful? So what are we arguing about? If they were never successful, then who cares?”

Burnside, who says he hasn’t yet heard Delta Kream, has his own thoughts on the matter.

“All these guys, my Big Daddy, Junior Kimbrough, Othar Turner, Ms. Jessie Mae Hemphill, to me, they will always be successful, rich at heart and rich in the music, because that’s all I was around my whole life,” he says. “They showed me the ropes. So, to me, that music will always be successful, without the money part. It don’t have to be all about money, even though those guys needed money. My Big Daddy, he struggled; he was a sharecropper. He didn’t grow up with no money. But to be totally honest with you, regardless of what Dan Auerbach said, they successful to me.”

For his part, Burnside plans on continuing in his recently forged path as a singer-songwriter, one whose music is deeply informed by the past without being dictated or limited by it. He has no plans to stop covering songs by his heroes — Kimbrough, Hemphill, Big Daddy — but most important, he simply plans on singing about his own life. “I’m trying to make my own mark,” he says.

As his career progresses, he says he isn’t worried about losing touch with his musical DNA. “Hill country is in my blood,” he says. “It don’t matter where you take me: If I move to Australia, if I move to France, I’m still gonna be hill country. You can’t take it from me.”

Burnside becomes animated as he outlines his lifelong allegiance to the music his Big Daddy instilled in him, and his commitment to furthering its legacy through his own storytelling.

“I am one of R.L. Burnside’s grandsons that will play this music until I leave this world,” he says. “I feel that I am hill-country blues.”