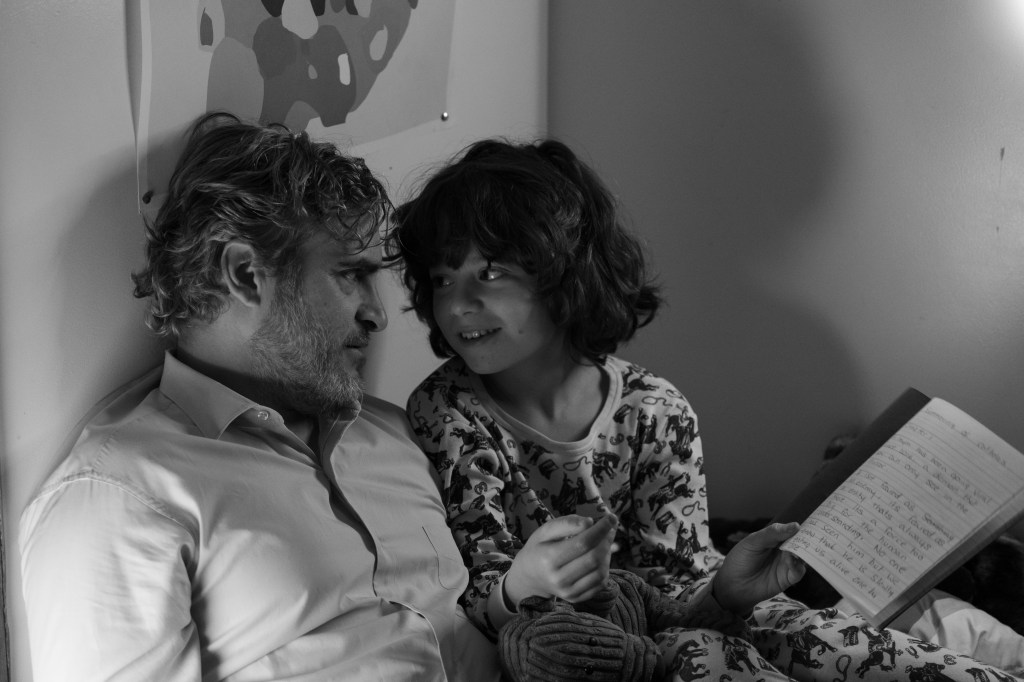 C’mon C’mon is distributor A24’s first platform release post pandemic, opening on five screens in New York (Angelika and Lincoln Square) and LA (Grove, Landmark and AMC Burbank) It’s s vote of confidence — launching in the strongest markets and letting word of mouth spread only works if there are signs of life. Specialty distributors say subtle signs there are, as more films open and stay in theaters longer.

Written and directed by Mike Mills and starring Joaquin Phoenix in his first feature star turn since Joker, it will move to circa 100 screens over the Thanksgiving holiday followed by a moderate expansion nationwide on Dec. 3. The well-reviewed Telluride hit (Deadline’s here) has a 92% Rotten Tomatoes critics’ score.

C’mon C’mon is also the second of three significant black-and-white releases skedded this fall after Kenneth Branaugh’s Belfast last weekend and ahead of Joel Coen’s The Tragedy of Macbeth opening Dec. 25. That Belfast had a solid opening with the sometimes challenging format is a good sign, indicating a more layered arthouse audience, that older demo that’s been the slowest to return to cinemas.

Belfast is holding in theaters along with Spencer, Wes Anderson’s The French Dispatch and a clutch of other indie titles even as new offerings roll out. “You need the consistency. One weekend is not a barometer. What’s been encouraging over the past few weeks is the good holds, with the new entrants. That indicates a depth of audience there that wasn’t before,” said one distribution executive.

In C’mon C’mon, a moving story about the connections between adults and children, past and future, Johnny (Phoenix) and his young nephew (Norman) forge a tenuous but transformational relationship when they are unexpectedly thrown together. With Gaby Hoffman.

It’s worth noting that this and most of the other specialty films highlighted below are festival hits with great reviews. MCU fans may brush off critics, arthouse fans don’t.

Elsewhere in specialty, Netflix presents Jane Campion’s much buzzed about western The Power of the Dog in about 40 theaters and Halle Berry’s directorial debut Bruised in circa 150.

The Power of the Dog (Deadline review here) is a gorgeous looking western starring Benedict Cumberbatch, written and directed by Campion in an adaptation of the 1967 Thomas Savage novel. It premiered in Venice where Campion won the Silver Lion for Best Direction. A 94% critics score on Rotten Tomatoes.

Cumberbatch plays charismatic rancher Phil Burbank, who inspires fear and awe in those around him.  When his brother brings home a new wife (Dunst) and her son (Smit-McPhee), Phil torments them until he finds himself exposed to the possibility of love. Also starring Jesse Plemons, Kirsten Dunst, Kodi Smit-McPhee, Thomasin McKenzie, Frances Conroy, Keith Carradine, Peter Carroll, Adam Beach. On Netflix Dec. 1.

In Bruised, Berry plays a mixed martial arts fighter who leaves the sport in disgrace. Down on her luck and simmering with rage and regret years later, she’s coaxed into a brutal underground fight by her manager/boyfriend and grabs the attention of a fight league promoter who promises Jackie a life back in the octagon. But the road to redemption becomes unexpectedly personal when the son she gave up as an infant shows up at her doorstep. Deadline review here.

Bleecker Street presents India Sweets and Spices in 346 theaters, a mix of commercial and arthouse.

Writer/director Geeta Malik’s charming coming of age story set among a wealthy Indian community in New Jersey, debuted at the Tribeca Festival. It follows college student played by Sophia Taylor Ali on summer break, upending her posh family’s well-ordered life with brash, newfound independence. After befriending the handsome son of the new owners of the local Indian grocery, she invites his family to a dinner party where family secrets are revealed.

Bleecker Street hopes the film will attract the audience that’s been actively supporting films from India and South Asia, which have consistently performed well even in the current shaky market. “We know the audience are avid moviegoers,” said Derval Whelan, president of distribution. “With Sophia, Manisha and Adil’s following, we are hoping they will come out to see some of their favorite actors in a new role,” she said — referring to stars Ali, Manisha Koirala and Adil Hussain. The films also star Rish Shah, Deepti Gupta and Ved Sapru. An 87% Rotten Tomatoes critics score.

The comedy written and directed by Radu Jude, produced by Ada Solomon, won the Golden Bear at the 2021 Berlin Film Festival, screened at NYFF, and was nominated for 2 European Film Awards. It’s 90% Certified Fresh with critics on Rotten Tomatoes. Deadline review here.

Emi, a schoolteacher, finds her reputation under threat after a personal sex tape is uploaded onto the internet. Forced to meet the parents demanding her dismissal, Emi refuses to surrender. It’s a film in three loosely connected parts: a walk in the city of Bucharest, a playful essay on obscenities, and an incendiary comic confrontation. Starring Katia Pascariu, Claudia Ieremia and Olimpia Mălai.

And IFC opens documentary Kurt Vonnegut: Unstuck in Time in 68 theaters and The Feast in 22.

The former, directed by Robert Weide, is a tribute to the visionary late author, offering an immersive dive into Vonnegut’s upbringing and creative output. It started 39 years ago with young, struggling filmmaker Weide wrote a letter to his literary idol proposing a documentary on Vonnegut’s life and work. The resulting film reflects the friendship and bond they formed over the decades. In theaters and on demand. It’s got a 93% with critics on Rotten Tomatoes.

For some scares, The Feast is a Welsh horror title from director Lee Haven Jones, starring Annes Elwy, Lisa Palfrey, and Caroline Berry that premiered in the Midnighters section of this year’s SXSW Film Festival.

Filmed entirely in the Welsh language and entrenched in traditional folklore, it follows a mysterious young woman who arrives to serve affluent guests at a dinner party in a remote house in the Welsh mountains. What the privileged guests do not realize is that they are about to partake in their last supper in a horrifying fable that grapples with themes of greed, class, and privilege shot in the breathtaking Welsh countryside. In theaters and on demand. It’s 81% Certified Fresh with critics.

Lionsgate presents Zeros And Ones— a gritty political thriller set over one night in Rome — in about 30 theaters and on demand. Written and directed by Abel Ferrara, with Ethan Hawke, Cristina  Chiriac, Valerio Mastandrea. Called to the city to stop an imminent terrorist bombing soldier JJ desperately seeks news of his imprisoned rebel brother Justin (Hawke plays both) who holds knowledge that could thwart the attack. Navigating the capital’s darkened streets, JJ races to a series of ominous encounters hoping to keep the Vatican from being blown to bits.

On the busiest night of the year at one of the hottest restaurants in London, charismatic head chef Andy Jones (Stephen Graham) balances on knife’s edge as personal and professional crises threaten to destroy everything he’s worked for. A surprise visit from a health and safety inspector sets the staff on edge as the overbooked hotspot begins to fill with guests. Jones alternately berates and cajoles his diverse staff trying his best to diffuse tensions between management and his crew while catering to the ridiculous demands of customers. It’s got a 96% Rotten Tomatoes Critics score.

Build Your Future: Your Wall, Your Why, Your Way
Rocky Kramer’s Rock & Roll Tuesdays Presents “90’s Night” on November 23rd, 7 PM PT on Twitch
Five Covid-19 leadership behaviours to maintain in 2022
Three Ways to Know Franchising is Right for You
This Bestselling Weighted Blanket on Amazon Is Seriously Discounted For Black Friday!