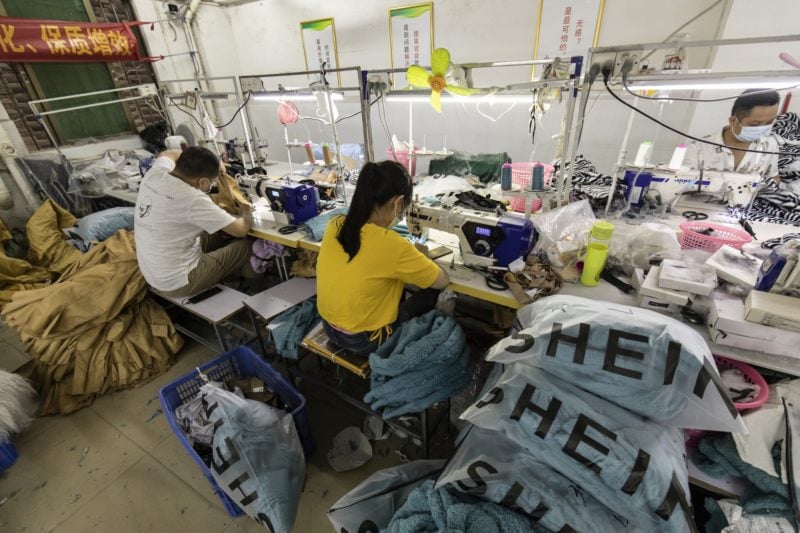 The brand is no stranger to controversy.

Shein’s reputation has taken another hit.

The TikTok-famous fast fashion brand was embroiled in yet another controversy last week after an investigation by Swiss advocacy group Public Eye uncovered alleged labour law violations at its facilities in China.

Researchers — who remained anonymous for their own safety — visited 17 of the brand’s suppliers in the region of Guangzhou, China, a sprawling port city north of Hong Kong once home to Shein’s headquarters (the company is currently based in Nanjing).

The report’s alarming findings include 75-hour workweeks, hazardous work environments and other alleged labour law violations. Many of the manufacturing sites were described as “informal workshops” that posed fire hazards, with no emergency exits and barred windows.

In a statement provided to the BBC and other publications, a Shein spokesperson said: “Upon learning of the report, we immediately requested a copy and when we receive and review the report, we will initiate an investigation.

“We have a strict supplier Code of Conduct which includes stringent health and safety policies and is in compliance with local laws. If non-compliance is identified we will take immediate action.”

Per the report, garment workers in these factories sew for 11 to 12 hours each day, amounting to roughly 75 hours of work each week. Public Eye also stated employees are only provided one day off per month, and do not receive paid overtime or employment contracts, thus preventing the workers from accessing social security benefits.

But it’s not just Shein, these conditions are commonplace in the textile industry. In China, migrant workers come from outside provinces where wages are much lower to work in production facilities. “Many are only in the city for a limited time, without their families and with no responsibilities other than to earn as much money as possible,” a Public Eye researcher explained.

The precarious working conditions are the same for those employed at Shein’s main warehouse just outside of Guangzhou and the company’s logistics centre in Belgium, researchers said.

Shein adds roughly 1,000 new items to its site each day, superseding the production speed of other fast fashion giants like Zara and H&M. How? Well, the brand is able to do this by testing out new products in small batches, according to WWD.

If an item doesn’t sell on its website, Shein won’t make it anymore. But if it does well with consumers, the company will immediately begins large-scale production. Public Eye reported that most garment workers are paid for each item of clothing they make instead of a guaranteed minimum, fostering a motivation to sew as fast as they can to earn more money.

Shein’s trendy styles and extremely low prices appeal to young women with less cash to spend on on luxury clothing, and the online retailer is the most downloaded e-commerce app in the U.S. — but its been no stranger to controversy.

The brand has been called out several times for stealing and reselling designs from smaller labels at a cheaper price. And in October, a report released by CBC Marketplace found toxic chemicals in Shein’s clothing that can cause harm to the brain, heart, kidneys and reproductive system.

As for its environmental impact, Good on You, an organization that assesses and rates the ethics and sustainability practices of fashion brands, categorized Shein’s environmental efforts as “Very Poor” — the lowest score. “From hazardous chemicals to carbon emissions to microplastics, Shein is making zero effort,” the assessment read. It added that fast-fashion brands like Shein “perpetuate a throwaway fashion culture simply by existing.”

On social media, though, Shein is evidently winning. The brand is forever being promoted by influencers and featured in TikTok try-on hauls that have garnered millions of views. It even secured celebrity judges like Law Roach and Khloé Kardashian for its Shein x 100K Challenge TV show, where one up-and-coming designer won a cash prize.

But despite its hyper-visibility on social media, Shein lacks brand transparency. It’s difficult to find publicly listed information about its supply chain or financial earnings, and it remains an enigma that is mostly represented by the influencers who promote it.

“Shein’s business model is set up to control as much of the value chain as possible, while taking on as little responsibility as possible,” stated Public Eye in a report summary. “Through its combination of a cutting-edge online strategy and archaic working hours, the Chinese newcomer is perfecting the fast fashion industry in a particularly insidious manner. In doing so, it is taking the sector’s tradition of shunning responsibility to another level.”

The only way to put an end to these unethical practices, the group said, is by introducing requirements for supply chain transparency and imposing legislation that forces brands like Shein to take corporate responsibility. This was a major talking point at the 2021 COP26 summit, and Shein’s latest controversy demonstrates how badly these restrictions are needed.