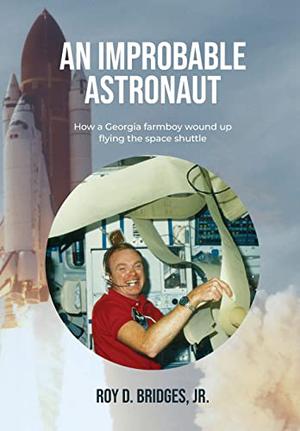 A debut memoir focuses on a venturesome Southern farm boy who fulfilled a lifelong dream to explore space as an astronaut.

From his earliest days, decorated military veteran and retired astronaut Bridges had an undeniably adventurous spirit. His book, split into three sections, first explores his quest to learn everything about space travel during an inquisitive youth, then his full immersion in the NASA program, and, finally, his emergence as a key leader in numerous Air Force interstellar projects. Beginning at age 5, the author displayed a lively imagination and explorative spirit as he scoured the forests around his suburban Georgia home in search of bears and buried treasure. Born during World War II, Bridges writes fondly of his early life as the son of a registered nurse mother and a father formerly enlisted in the Army Air Corps. Though the family was preoccupied with work, this aspect afforded the shy author and his sister, Eva Mae, many opportunities for “testing boundaries” even after they relocated to his beloved grandparents’ tobacco farm. In high school, Bridges developed an affinity for science and engineering, marveling at how Soviet space explorers launched an artificial satellite into an elliptical low Earth orbit. With his family’s immense support, he decided to pursue a career in space travel: “I didn’t care how improbable that might be. I saw it as my great adventure.” His strenuous years training at the Air Force Academy provide plenty of stories of camaraderie, cadet scandals, and his marriage to his first love, Benita, in 1967 (they are still together). After flying fighter jets in the Vietnam War, he saw his career trajectory soar, spanning intensive training in pilot school with rocket-powered aircraft, working at the Pentagon, and becoming a NASA astronaut candidate.

In his early 40s, after raising two children with his wife, Bridges accepted a prestigious offer to pilot the Challenger Spacelab 2 shuttle mission in 1985. This climactic event becomes the memoir’s capstone and is narrated in exacting detail, providing a riveting account of his time manning the craft as it shot into space despite a terrifying episode of engine failure. His career would climb even higher in the Air Force before the author retired in 1996. Though the impressively written book needs no embellishment, Bridges’ story is further enhanced with generous personal photographs illustrating the many pivotal moments of his momentous career. There are shots of Bridges immersed in a water buoyancy spacewalker simulator; near the combat jets he piloted; with the Spacelab 2 crew; and during his stint as an Air Force major general, perhaps his crowning achievement. In this obvious labor of love, Bridges, at 79, reflects on a life lived to the fullest, with many dreams accomplished and countless boundaries and obstacles conquered. While he shares a somewhat overwhelming amount of detail throughout his impassioned self-portrait, what will resonate most with readers of all ages is the author’s fearless spirit and perseverance in achieving seemingly insurmountable goals. Even readers with just a casual interest in space travel and interstellar exploration will find much to savor in this admirable, inspiring, and heartfelt account. The memoir proves that with enough drive and determination, anything is possible.

A sublime scrapbook tribute to an unexpected career in orbit.