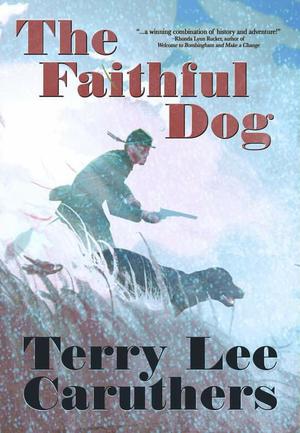 Inspired by a Civil War newspaper article, this middle-grade historical novel tells the story of a devoted dog who accompanies his owner to the battlefield.

It is December 1861, in Chicago, and Bärchen, a large black pointer, is enjoying the warmth of the fireplace when he becomes aware of tension in the family. Louis W. Pfeif has reenlisted in the Union Army, much to the chagrin of his wife, Elizabeth, and their 5-year-old daughter, Louisa. Elizabeth’s father and uncle have raised funds to form a new regiment, and Louis is given the rank of second lieutenant. But once Louis has bid his family farewell and departed the house, Bärchen leaps up and charges the door. He barks “furiously, hurling himself against it again and again.” He insists on joining Louis. And so the fiercely loyal canine heads off to war as a member of the 58th Regiment. His self-appointed mission is to protect his beloved Louis. Caruthers’ Civil War tale follows the 58th from its training in Illinois until April 1862, when it arrives in Tennessee and engages in the brutal Battle of Shiloh. Bärchen quickly endears himself to the young soldiers when he performs his showstopping mock salute: At Louis’ command, he rears up on his hind legs, raising his right paw to his eyebrow. He also gets himself into a variety of scrapes. Without anthropomorphizing the dog, the novel successfully develops Bärchen into a full-fledged central character who expresses himself, as canines do, through movements of his ears, an assortment of vocalizations, and deep sighs of contentment as he settles down beside Louis. The dog’s antics lighten the drama with humorous episodes, but there are also passages that are quite poignant. Caruthers has done her research and creates a vivid portrait of the confusion that reigned during the early months of the war—the faulty weaponry, changing orders, frequent troop desertions, and lack of food. When the 58th reaches Tennessee, skirmishes with the Confederates add violence to the story. But nothing will prepare young readers for the tragedy that befalls Bärchen in the Battle of Shiloh.

An engaging, touching, and heartbreaking adventure.