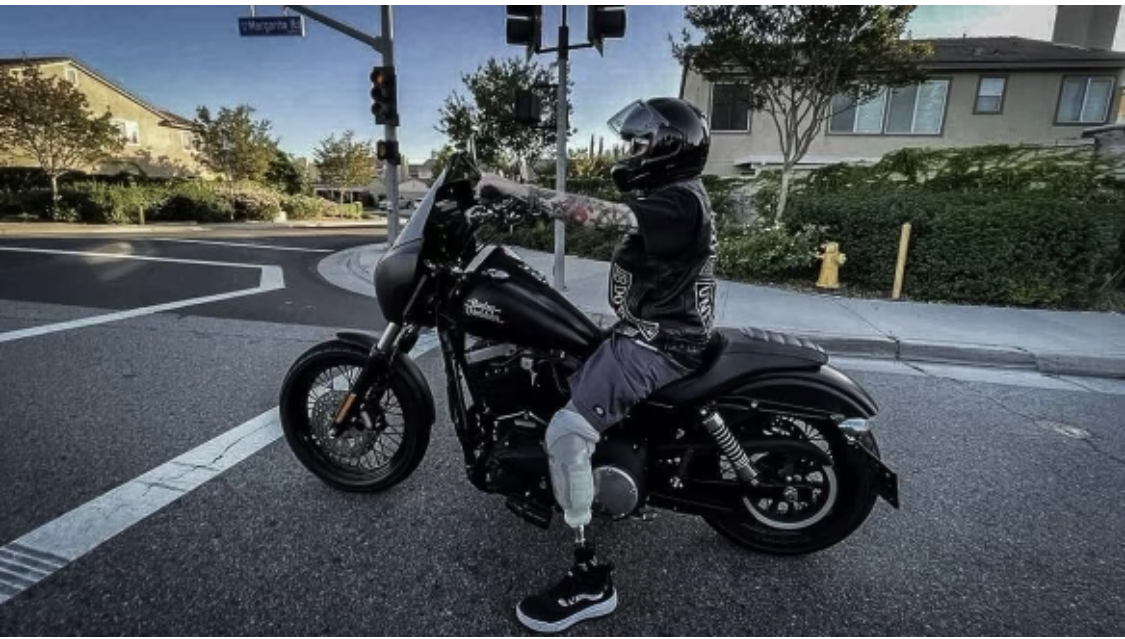 The National Highway Safety Administration states that motorcycles make up 3% of registered
vehicles in the United States, but represent 14% of traffic fatalities. Mike Ball, a well-known
figure in the motorcycle community, was almost included in the number of traffic fatalities when
he was in a horrifying motorcycle accident that altered his life. He continues to ride in spite of
losing a limb.

At 25 years old, Mike Ball was involved in a near-fatal collision that dismembered his left leg. On
the afternoon of March 6, 2021, in Huntington Beach, California, Ball was headed toward
Indianapolis Street when a driver made a left turn from the opposite side of the street, hitting
Ball.

Jeff George saw the crash in front of him, then watched as Ball slid down the street and onto a
curb, narrowly avoiding a tree. George knew he needed to act quickly and he used his belt as a
tourniquet for Ball. Paramedics transported Ball to Orange, where he was checked into the
University of California, Irvine Trauma Center.

Former emergency medical technician Isaac Mandler said “That bystander saved his life.”
Mandler explained the medical procedure for traumatic amputations. “Any limb that you sever
enough to where you’re going as deep as the bone, you’re in serious trouble,” said Mandler.
“Because if you slit an artery, you’re done. It can take two to five minutes to bleed out for any
injury so getting a tourniquet on the patient is an EMT’s priority.”
While George doesn’t consider himself a hero, he’s grateful that he was there at the right time.
“Ball is the true hero,” he said.

Although Ball had medical insurance through his employer and Cigna covered most of his
hospital bills and prosthetics, the financial blow continues to impact Ball’s life. From six figures
to bankruptcy, he lives without any unemployment and disability compensation. After graduating
from Huntington Beach High School he immediately started training in the maritime industry. As
a Tankerman-PIC, he oversaw the transfer of oil and fuel to the ships that came in and out of
the Los Angeles and Long Beach harbors. When he wasn’t fueling ships, he was pursuing his
responsibilities as a national cabinet member of Insanos Motorcycle Club, which he no longer
belongs to.

After joining in 2020, Ball climbed the ranks from Vice President to President of the Orange
County Chapter. It was only a short while before he became the communications director for the
USA Chapter. The club honored him by arranging a ride from São Paulo, Brazil to Rio de Janeiro.

The ride included over six thousand registered bikes. His recovery was worthy of
celebration, but the accident has brought his father’s fears to the forefront.
Bradley Ball respects his son’s choice to continue to ride, but can’t help but wonder if there will
be another phone call. “I’m grateful that he’s alive. I’m so stoked. But inside, I am not the same
person. I used to feel happy,” said his father. He believes that the accident has changed his son
for the better.
“A lot of people will just give up. Just sit on the couch and cry poor me and he didn’t. He did the
exact opposite,” said George. He is inspired by Ball’s propensity to rebuild his life
Mike Ball was able to walk again with the help of YouTube videos, therapy, and rehabilitation.
He was able to teach himself how to walk again after just two months. It wasn’t long before he
was back on his Harley doing what he loves most–riding to his peaceful place. Currently, he has
a social media platform in the works and co-hosts a podcast called “DemonsRowTV.” Preaching
unity to his subscribers, Ball wants to disseminate stereotypes associated with motorcycle
culture. He describes the channel as the holy grail of motorcycle culture.

A positive mental attitude is Ball’s key to facing adversity. He’s driven by people who are
recovering from severe injuries similar to his. He’s been there and he knows the dark feeling of
uncertainty. Stranger or not, Ball picks up the phone to comfort those who reach out to him,
which aligns with his desire to become a motivational speaker.
“They get to learn about you, you get to learn about them, and then I’m able to show them–Hey,
life is not over,” said Ball. “It’s literally just begun for you, and let me show you how it’s done.”
Contributed by Mahealani Wu.

Tyler Perry Addresses Spike Lee ‘Madea’ Criticism with Chris Wallace
Lululemon’s Most Popular Print Is Back From the Vault in a Limited-Edition Collection
The Creators of the Theragun Just Released 8 New Wellness Tools — and They All Hit the Spot
The Bird Feeder
Apple’s Movie Musical ‘Spirited’ With Will Ferrell And Ryan Reynolds Gets Theatrical, Streaming Release Dates