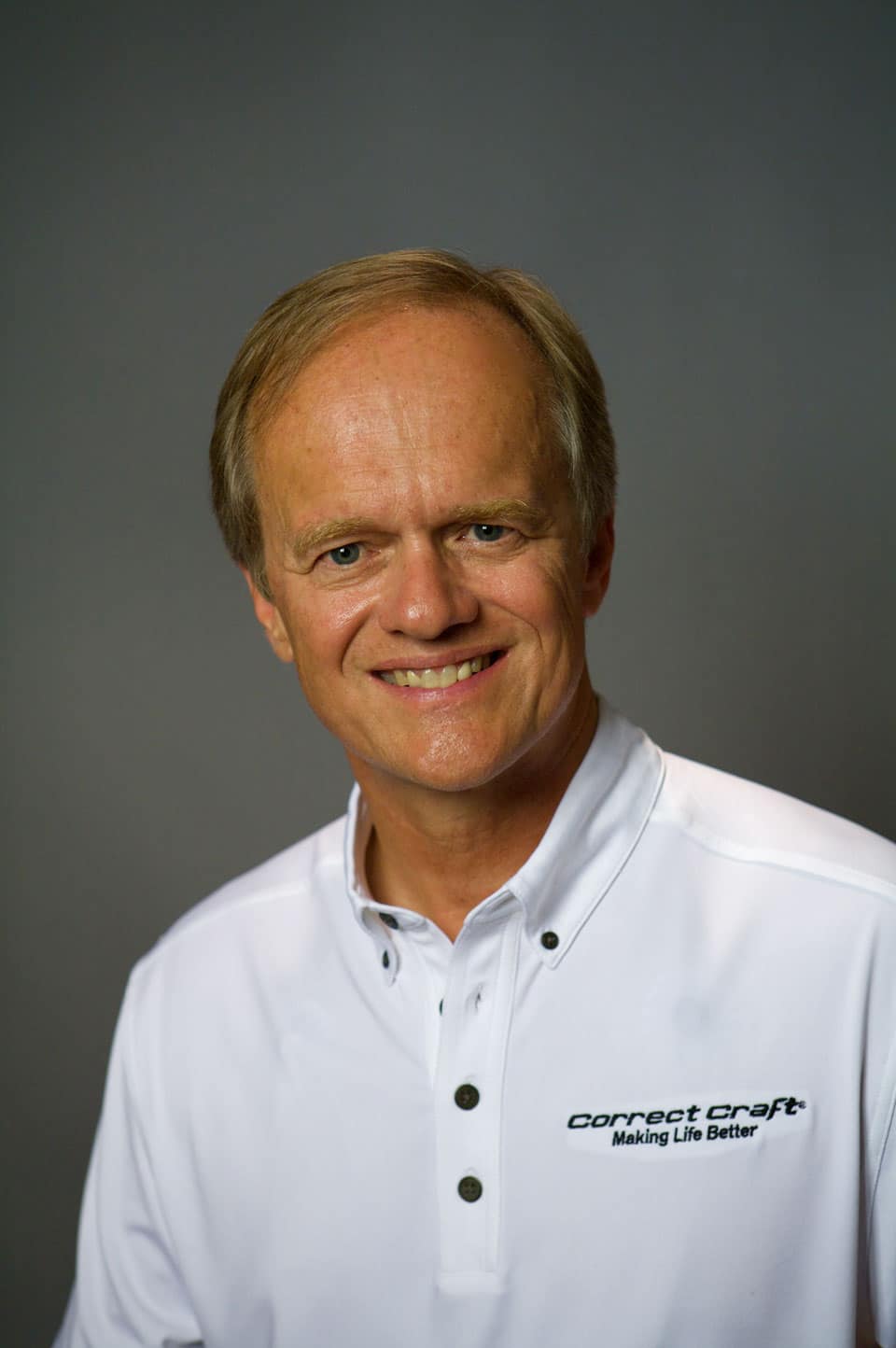 In early 1945 the planet was ravaged. A deadly world war had consumed the globe and killed tens of millions; most people were living with unimaginable stress. However, the tide was turning in favor of the allies; Hitler had overplayed his hand at the Battle of the Bulge. War in the European theatre would soon be over.

But there was a big hurdle to finishing off the Nazis, the Rhine River. Supreme Commander Eisenhower needed boats, and he needed them fast. To get those boats, the military reached out to Correct Craft, a small company in Orlando, Florida.

Correct Craft was building a few boats a week, but the military needed them to build 400 in just over three weeks. The task was daunting enough on its own but made even more complicated when the company would not allow employees to work on Sunday, an integral part of its culture. The military insisted that the company’s employees work seven days a week but conceded to a six-day week when Correct Craft’s owners refused to budge on this key organizational value.

Despite the military’s concern about the six-day week, Correct Craft got the boats done a few days early and even built extra boats for other boat builders who could not complete their allotment even though they were working seven days. The feat went down in military records as “the miracle production.”

A decade after the miracle production, Correct Craft was given another government contract, this one for 3,000 boats. The company’s challenge was different with this contract; it was an unethical government inspector.

The bribe demanded by the inspector was small compared to the contract; however, the company’s strong culture of ethics would not let them even consider paying it. Unfortunately, sticking with their ethical culture this time had a negative consequence; it put them in bankruptcy. The inspector failed hundreds of boats that were perfectly acceptable.

Creditors exited the bankruptcy proceedings with just ten cents on each dollar owed to them by Correct Craft.  However, the company’s fierce culture of values drove them to spend the next twenty years of profits paying back each of the shorted creditors. They didn’t stop this practice until they had paid the full amount discharged to every vendor.

As I write in Making Life Better: The Correct Craft Story, the company had a decades-long history of making culture important that drove outstanding results. But the culture started slipping, and Correct Craft was falling apart by the turn of the century. When I arrived in late 2006, as the fifth CEO in five years, the storied culture was battered and barely existed. Fortunately, our outstanding team changed that fast, reinstating a culture that resulted in nearly 25X growth over the last thirteen years.

Reinstating a great culture at Correct Craft has greatly impacted our organization’s results. We have grown from one location in Orlando that was losing money to a highly profitable organization with over a dozen locations across the U.S. and distributors in about seventy countries. Our company is proof that being intentional about organizational culture drives great results.

Here’s how to develop a great culture at your organization.

First, identify what is important. A vital role of every leader is to create clarity, which is especially important related to an organization’s values. This seems obvious, but very few leaders do it.

At Correct Craft, we have been very clear on our organizational “Why,” which is “Making Life Better.” By creating clarity around our why, we are ensuring that everyone, but most importantly our team, know that we exist for much more than just building great products and making money.

Secondly, after clearly identifying your values, develop a tool to communicate what is important, so it is easy to understand.

Over a decade ago, our team realized that we had many important values, but we did not communicate them methodically and succinctly. We decided to fix that problem by creating what we now call our culture pyramid. The culture pyramid captures what is important to us in a way that is easy to understand.

Every day our team uses the culture pyramid to keep us on track. It often comes up in meetings when we are trying to make a decision. We use it with outsiders to help them understand our values. When talking to a potential acquisition candidate, we want to be sure they understand who we are, so we will go over the culture pyramid in one of our first meetings.

Our company has no more powerful tool than our culture pyramid. A picture of it is below: 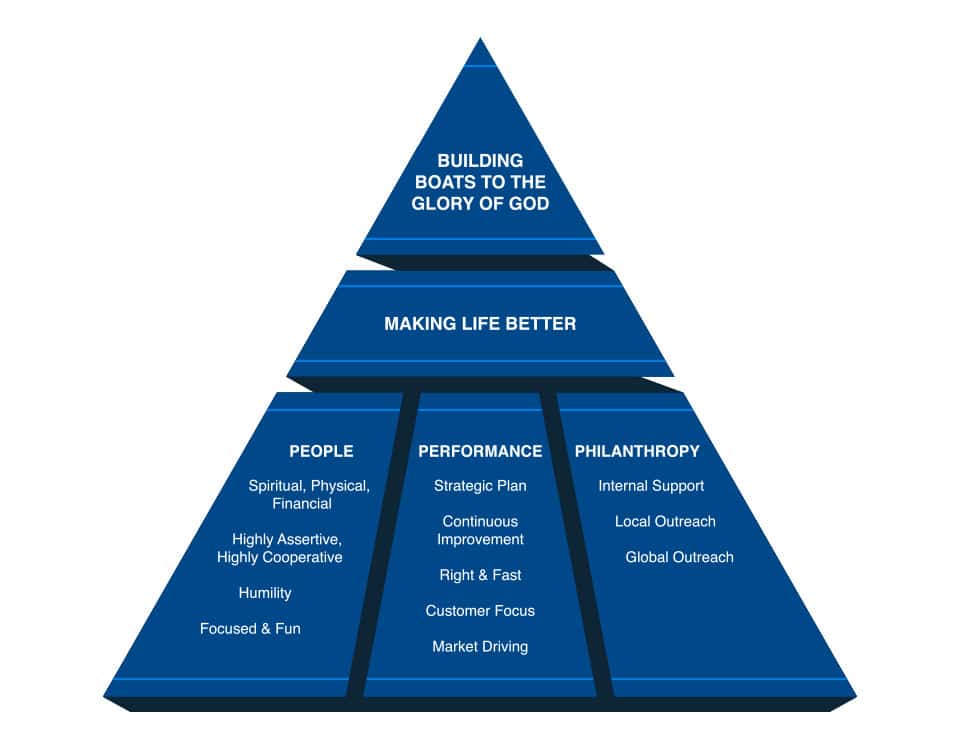 Third, once you have identified your organizational values and created a tool to share them, you must repeat your values constantly. You must share them over and over. Keep sharing your values until you are tired of talking about them and your team is tired of hearing them, seriously. Good leaders work very hard to ingrain the correct values into their organization. If you are not intentionally sharing the values you have deemed important, other values will develop and probably won’t be what you want.

Finally, leaders must model the values they have identified as important. Employees will always believe what a leader does more than what they say.

For example, one of our fundamental values is “highly assertive, highly cooperative,” which we sometimes call “no silent liars.” We expect everyone to speak up in a meeting and share their view, even if it is different from the CEO’s. However, as CEO, I know that if I don’t listen carefully to opinions that are contrary to mine and show the team member who shared it respect, it is the last time they or anyone else in the meeting will speak up. Being a leader does not exempt you from the values; you must submit to them more than anyone.