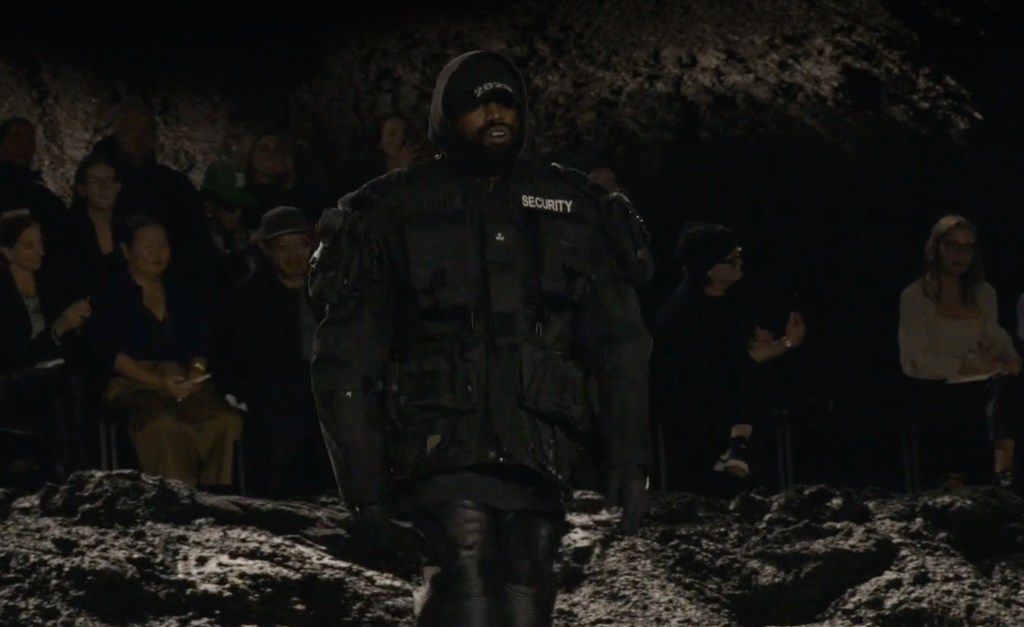 Kanye West was back in his natural habitat Sunday — Paris Fashion Week — where the rapper kicked off Balenciaga’s Summer 2023 collection showcase by leading the march down the muddy “runway.”

While Ye has severed ties with the Gap, his partnership with Balenciaga continues on as West was the first “model” to stomp down the dark circular dirt path — “a metaphor for digging for truth and being down to earth,” Balenciaga creative director Demna explained in the show notes —  with the rapper donning a black jacket with a comical amount of utility pockets, giving him an almost-paramilitary look; adding to the ready-to-war outfit was the word “Security” over the coat’s left breast.

When Kanye said he’s preparing for “war” against the Gap (and reading), he apparently wasn’t kidding:

According to Elle, West’s children North, Chicago, Psalm and Saint West all attended the Balenciaga show — which marked Ye’s first-ever runway appearance — as did Doja Cat and Kylie Jenner. Bella Hadid was also among the models who strolled through the mud.

Demna added of the Summer ’23 line in the show notes, “I’ve decided to no longer explain my collections and verbalise my designs, but to express a state of mind. Fashion is a visual art and all we need is for it to be seen through someone’s eyes… You either like it or not.”

Kanye West Has Mental Breakdown on ‘Infowars,’ Praises Hitler and Nazis
Ford claims No. 2 spot in EVs behind Tesla – but gap remains wide
ABUELA’S FIDEO
Gifts for the star baker in your life
Cody Rigsby Hosted a Holiday Peloton Class, So of Course Mariah Carey Stopped By