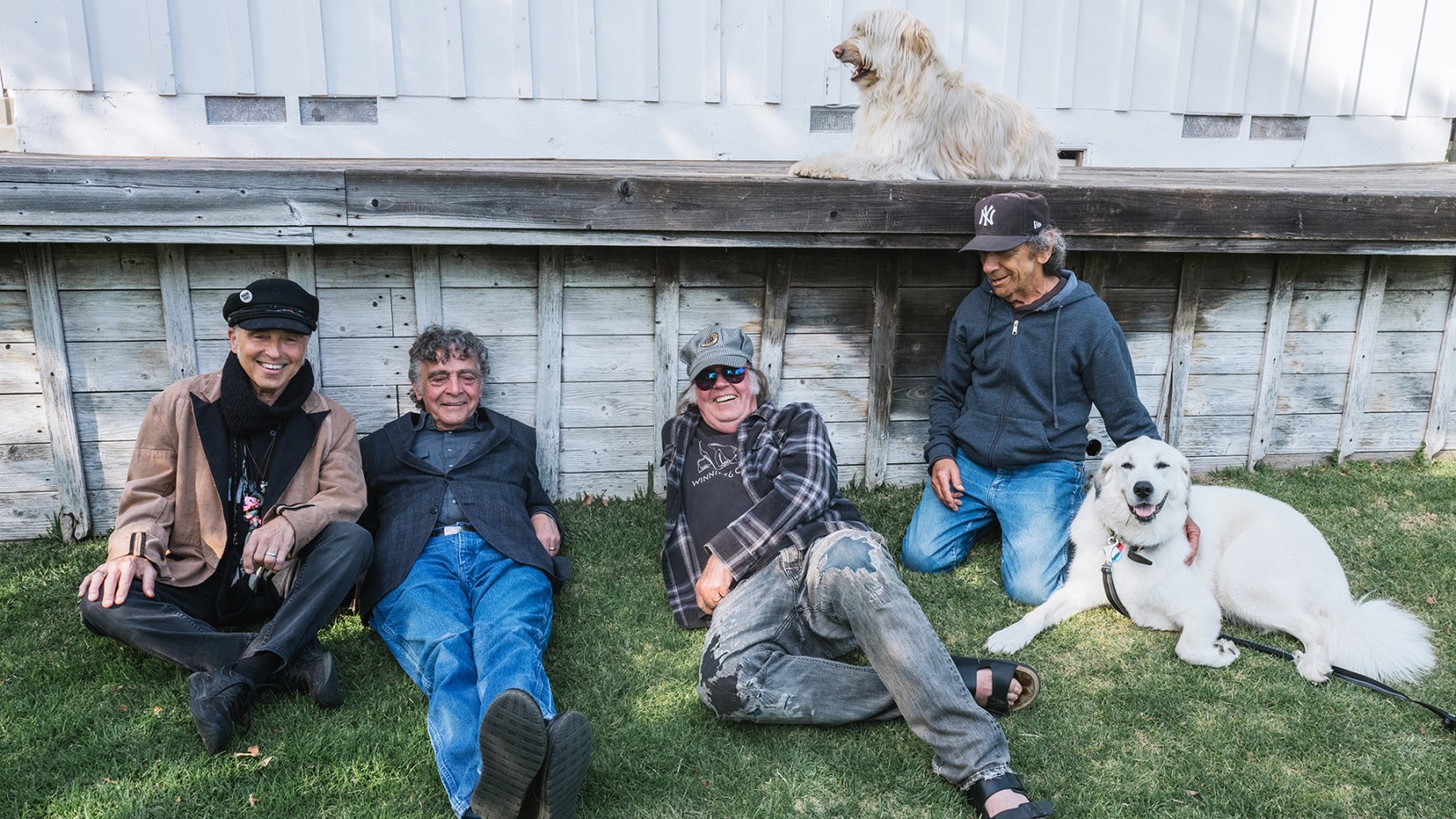 A little over six months ago, Neil Young reached out to the three members of Crazy Horse and told them he was ready to cut a new LP. They recorded their last two albums (2019’s Colorado and 2021’s Barn) at remote studios in Colorado where they occasionally had to use oxygen tanks to deal with the high altitude, but this time around he wanted to head to Malibu, California, so they could work with Rick Rubin at his beachfront studio, Shangri-La.

The result is World Record (out Nov. 18), an 11-track collection where Young and the Horse confront the destruction of our environment (“Love Earth,” “This Old Planet”), global disorder (“The World,” “Walkin’ On The Road”), and learning to live with deep regrets (“Chevrolet”). Much like Colorado and Barn, it’s a moody, reflective work packed with gentle ballads, though there are occasional moments where Young plugs in Old Black and revisits the spirit of Rust Never Sleeps and Zuma. “We got into this magical space together,” says Crazy Horse bassist Billy Talbot. “And the rock & roll gods were with us the whole time.”

Young’s history with Crazy Horse goes all the way back to 1969’s Everybody Knows This Is Nowhere, but they were just one of several bands he juggled over the past five decades. He kept them on the sidelines for much of the 2000s and 2010s, only calling them in for 2003’s Greendale and the twin 2012 releases Americana and Psychedelic Pill. But ever since guitarist Frank “Poncho” Sampedro retired in 2018 and was replaced by Nils Lofgren, they’ve been his sole studio band. World Record marks the first time in Young’s career that he’s used Crazy Horse for three consecutive studio albums. 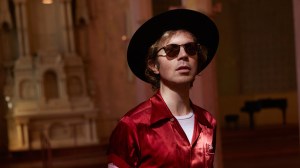 “Poncho brought so much to the table, and we really miss him,” says Talbot. “He’ll always be a part of Crazy Horse. But when he was in the group, we weren’t doing many ‘Heart of Gold’-style [acoustic] songs. With Nils in there with us, we can do that. Neil can get on the pump organ or piano, we can play along, and that spirit comes out where we’re like, ‘We can do this too.’”

The songs for World Record started coming together not long after Barn came out in December 2021. “Neil reached out to us and was like, ‘Hey, I’ve got two or three songs,’” says Lofgren. “‘When I get a batch, we’ll record again. Maybe in the summer.’”

But the tunes came faster than Young expected, and he asked them in late April of this year if getting together on May 1 — just one day after a full moon — was possible. “I went, ‘May 1?’ recalls Lofgren. “‘That’s not summer. That’s a week and a half away!’”

Fortunately, Bruce Springsteen’s decision to bump his tour with the E Street Band from 2022 to 2023 meant that Lofgren had a wide-open calendar. He originally planned on driving to Malibu with his wife Amy, since he hates flying in the age of Covid, and his accordion is very difficult to ship. But just a few days before they planned on leaving, the Lofgrens watched the Showtime docuseries Shangri-La about Rubin’s longtime studio.

“At the end of the first episode, Amy looked at me and said, ‘Go book a flight. I’m not going,’” says Lofgren. “I go, ‘What do you mean?’ She goes, ‘You have to be there alone.’ She got the vibe that this was going to be a bunch of old friends really getting down in it with the music. She’s been with me for 27 years, and knows I can get pretty neurotic and deep down in the minutia of the music I’m doing. She just thought I’d be better off being alone. And she was right, even though I missed the hell out of Amy, my dogs, and our home.”

Lofgren arranged to stay in a bare-bones room at Shangri-La just steps away from the studio, while Molina and Talbot shacked up at a nearby hotel. “I walked in and there was the After the Gold Rush upright piano I first played when I was 18,” he says. “There was the Tonight’s the Night piano, a Wurlitzer electric piano, Neil’s pump organ, and about 50 incredible guitars. I was able to turn to any of them at any time, 24/7. I felt like a kid in a candy store being so close to this museum of ancient, beautiful instruments.”

Prior to the sessions, Young sent Lofgren and Talbot rudimentary demos he’d recorded at home on the piano. He often had little more than a chorus and a single verse. “That’s all Billy and I needed,” says Lofgren. “It allowed us to make some chord charts, have an idea where the tunes were headed, and not show up completely in the dark.”

Molina was sent nothing in advance since Young wanted the drummer to just feel the songs out in the moment without any forethought. All the tracks were tracked live to tape, even Young’s vocals. “We didn’t play any of the songs over and over,” says Talbot. “We’d usually just do them once or twice.”

Young is credited as a co-producer alongside Rubin, but nobody doubted who was calling the shots. “The idea of using a producer means turning over control,” says Lofgren. “That’s not something in Neil’s nature. He used Rick as a guide. It was never like, ‘You’ve got to do it this way.’ That’s just not going to work with Neil, and Rick knows that. But he would sometimes say things like, ‘Why don’t you try that one on acoustic guitar?’ or ‘Try going down a different road on this one.’ At times, it allowed Neil to show up and just be a singer and guitar player.”

“Rick is a real music fan,” adds Talbot. “He likes authentic things, things that happen naturally. He was really good for us.”

On seven of the 11 World Record songs, Young is stationed at either the pump organ or piano instead of the electric guitar. Lofgren, meanwhile, stuck largely to acoustic guitar, pedal steel, lap steel, or even accordion. This might sound sacrilegious to a certain sect of Crazy Horse purists hoping to hear another “Like a Hurricane” or “Cortez the Killer,” but this is far from the first time the Horse has mellowed out. “We did ‘I Believe In You’ [on 1970’s After the Gold Rush],” says Talbot. “That’s a really good one, and it shows that side of Neil.”

The album begins with Lofgren telling Young, “We caught something there,” and Young agreeing: “We caught a feeling.” They then kick into “Love Earth.” As the title suggests, it’s a love song to the planet that dreams of a pollution-free world. “The sky was blue and all the air so clean,” Young sings. “The water crystal clear/We lived by the sun and had it all/We were living the dream.”

The energy picks up on the feedback-drenched “Break the Chain” and cools down on the nostalgic “The Long Day Before,” before kicking back into high gear on the 15-minute album closer “Chevrolet” — a guitar-driven tune that would have fit seamlessly onto the guitar-heavy records from Crazy Horse’s past. It’s about memories triggered inside Young upon seeing an old Chevrolet. “New mama said we have a baby on the way,” Young sings, seemingly referencing his relationship with actress Carrie Snodgress in the Seventies and their son Zeke. “Soon enough we lost all contact/We were young and foolish/That’s all behind us now.”

“That song was a journey,” says Lofgren. “We just kept playing and playing. We’d hit things where Neil would go off, and then I’d do a counterpoint. It sounded like we’d been driving through a rough town, and then we got to a highway where we’d be cruising. It was a whole new level for the band, and it just felt great.”

It’s the kind of song that would sound incredible on a concert stage, but Young hasn’t played a single show since Farm Aid in September 2019. It’s the longest break of his career by a wide margin. He’s hinted that he’s open to the idea of concerts in 2023, but the E Street Band will keep Lofgren busy for the whole year, and possibly into 2024.

It’s a situation that’s caused Lofgren no small degree of anxiety, especially since an extensive 2020 Crazy Horse arena tour was on the books just before Covid hit. “Every time I call Neil’s manager and Bruce’s manager, I say, ‘Guys, I’m a half a century in. I paid some dues,’” Lofgren says. “‘Can you just let me create the schedules for Bruce and Neil for the next couple years, please?’ And they always tell me to get lost.”

He continues: “Bruce started booking shows and selling tickets for a tour next year. And then this Neil album happened and all this other stuff. I can’t get them to let me make the schedule. And so, sadly, I’m doing that tour. I talked to Neil about it. It bums me out, but I can’t be in two places at once.”

Young has floated the idea in the past that Micah Nelson might sub in for Lofgren on a Crazy Horse tour. “That’s been mentioned,” says Lofgren. “I’ve seen Promise of the Real play with Neil, and they’re fabulous. But look, I just made this great record. I think it’s the best of the last three with Neil and Crazy Horse. It bums me out talking about being replaced for a tour.”

Talbot says that he’s heard nothing about future Crazy Horse shows, with or without Lofgren. “I’d like to play some of these new songs, and some of the old ones,” he says. “But we really miss Poncho, and now Nils is going to be busy. Micah’s name has been mentioned. I wouldn’t be surprised if it worked. It would be great if we could make an album with him before we did shows, though.”

In the meantime, Lofgren is trying to come to terms with the idea of missing out on a possible Crazy Horse tour. “It’s such a drag, man,” he says. “It’s frustrating. But you know what? One day at a time. I’m doing what Neil and I often talk about, living in the possibility of now. I also just need to be philosophical about it. What am I going to do? I’m in two great bands.”

In this band, Lofgren is the baby at age 71. Young is 77, and both Molina and Talbot are 79. “We’re no spring chickens,” says Talbot. “We’ve sprung. We’ve got to put down the real thing. There’s nothing left to do but that.”