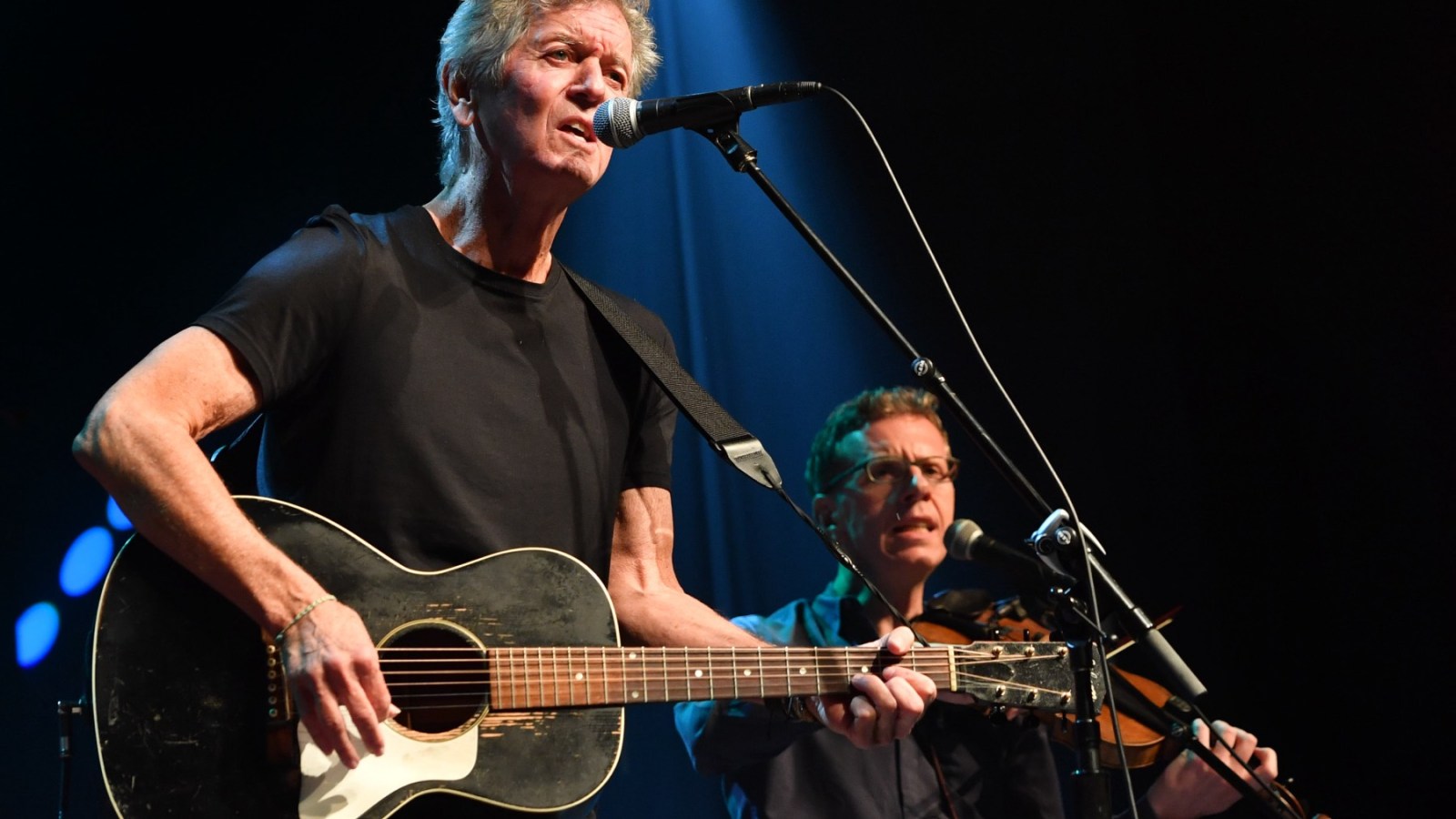 Even with his most successful work, Rodney Crowell knows there’s always room for revision. In 2018, the celebrated singer-songwriter took another crack at the lyrics to “Shame on the Moon,” a 1982 cut recorded by Bob Seger, long after he’d excised it from his own setlists. These ongoing efforts and others are chronicled in Word for Word, a new coffee-table book featuring Crowell’s song lyrics, enhanced by images of the in-progress compositions from the author’s personal notebooks and a lifetime’s worth of photos.

At 72, Crowell is a godfather of Americana music with 20-plus studio albums to his credit as well as numerous hits for himself and other artists. Next year, he’ll release another album recorded with Wilco’s Jeff Tweedy in Chicago. “It was a delightful experience and I made a really cool record,” he says. “It’s my least self-conscious record I’ve ever made. Part of the experience of collaborating with Jeff is that his presence allowed me to disengage my producer brain entirely.”

In this recent conversation with Crowell, which took place in the kitchen of his Nashville-area home, the singer-songwriter recalls reciting lyrics face-to-face with Guy Clark, opening shows for the Pretenders, and an embarrassing encounter with Cyndi Lauper. He also details the influence that drugs and, more recently, battles with the nervous-system disorder dysautonomia and transient global amnesia have had on his work.

One of the more surprising aspects of Word for Word is that, other than a sprinkling of background stories and photographs, it really is mainly just your lyrics but not really a large focus on what inspired the lyrics. Why did you decide to do it that way?
Hey, I worked hard on those lyrics, and if they don’t stand on their own, my bad. So what I was more focused on is, you could say, back stories; I call them side stories. I didn’t want to just present lyrics. But I didn’t want to try to draw attention… certainly I did with “Shame on the Moon.” I purposely drew attention to the fact that I still consider that song unfinished after all these years, and I left it hanging. What I’m drawing their attention to is what I think I’ve yet to get across, which is ironic about that song, because it’s probably my most successful song. I’m almost there. I truly believe that I’ll unlock the mystery of that song before I’m done.

Did you also tweak the lyrics of other songs as you were preparing the book?
Yes, I’ve tweaked lyrics over the years, while performing them live. Emmylou [Harris] recorded “Bluebird Wine” way back in ’74, ’75, and when we made the duet record [Old Yellow Moon], she said, “We have to record ‘Bluebird Wine’ and you have to sing it.” I said, “OK, I have to rewrite the lyric.” And she just kind of rolled her eyes. Later on, she said, “OK, I get it.”

You and Guy Clark would often read lyrics to each other. What do you remember about that collaboration? When I met Guy he was rolling with the Mickey Newberry and Townes Van Zandt crowd. He and [his wife] Susanna were close friends with Townes. The good news for me was that I knew a bunch of old dead-baby Appalachian songs. And the natural curator in Guy’s oeuvre was like, “Wow, you know some valuable shit.” So I got to hang around, and when we became friendly he said, “Come on over.” And he listened. He had these recordings of Dylan Thomas reading his poetry and he said, “We’ve got to make our songs where the language is this tight.” Which led to, “OK, look me in the eye and tell me the lyric.” Guy’s eyes are like eagle’s eyes. So, it was like, “Don’t avert your gaze. Tell me what you’re singing, tell me what you’re writing.” Having that kind of experience, where you look somebody like Guy in the eye and tell him your lyrics, is a recipe for longevity. I’m really grateful for that and grateful to him. And sometimes it scared the shit out of me.

You also managed to collaborate with Johnny Cash, on “I Walk the Line (Revisited).” How do you even approach something like that?
It’s a true story: 1956, I was probably six, going fishing with my father and my grandfather in a creek in East Texas down a wagon-rut road in the piney woods. I’m sitting in the backseat with my chin rested on the back of the bench seat and, suddenly, “I Walk the Line” came on the radio. I’ve always equated it to an alien abduction. It’s like that song came out of the radio and got me and took me off. I invented the narrative that once the song brought me back from the abduction, I was a songwriter. When I met Rosanne, and I met John and June, that experience came back to me. There it was, everything about the first time I heard that song. I tinkered with it and wrote the verses. I wrote these really dumb lyrics. I could not come up with anything and I gave up. The minute I did, I thought, “Oh, I’ll put his words in the chorus.” Rosanne and I had already split by then, but I called him and I said, “Hey, man, we wrote a song!” He said, “We did?” I asked him to come to the studio and what he thought was I had invited him to sing his version of “I Walk the Line.” As I’m singing his words to my melody, I noticed his eyes had just gotten narrower, and he said, “Son, you got a lot of damn nerve changing my melody.” [Laughs]

How much writing did you do under the influence of either drugs or alcohol?
Pretty much everything I wrote from 1973 ‘til 1986. As a matter of fact, it was an experience for me. I wrote a lot of good stuff with a hangover. Get up in the morning with a hangover and smoke a big, fat joint. I wrote a lot of good stuff. But at 36, in 1986, I was in New York City and Cyndi Lauper came into the studio. I was working and I was stoned on something that somebody gave me. I really liked her. She was funny and smart and I wanted to have a conversation with her and I couldn’t. It embarrassed me to the bone. I’m too high to talk to this interesting person. I came back to Nashville and I said that’s it. I actually said, “I don’t care if I don’t write another word. I’m done.” Pretty soon I started writing some good stuff. I ran into Willie Nelson once and had to imbibe and had to excuse myself because I got too paranoid. And then I accidentally got dosed by what I thought was CBD oil when it was the real stuff. That was a nightmare. Otherwise, I’ve been on the straight and narrow. I’ll have a glass of wine now and again, but let me just put it this way: I did a pretty good job under the influence. I’ll give myself that. But away from the influence I became a working artist, where before that I was just a lucky artist.

Around the time your self-titled album was released in 1981, you played a show in Nashville, opening for the Pretenders. How did that come about?
When they came over [from England] for their first tour, I was in California. [Pretenders guitarist] James Honeyman-Scott somehow found me and called me. He said, “Hey, we’re playing the Palomino, mate, come down and sit in with us.” So, I picked up my little Martin D-35 and went down, not really knowing what I was in for. Good grief, they were so incredibly powerful in that club! They were just fans of my What Will the Neighbors Think? album. It was my first foray into new wave — well, really my only foray into new wave. But we were friendly after that. So when they played Nashville, they asked if I would open at the Tennessee Theater. I don’t remember much about the show but it was when I had the original Cherry Bombs together, with Richard Bennett, Tony Brown, Larrie London, Emory Gordy and Hank DeVito. I’m sure we made a good show of ourselves.

How’s your health these days?
I’m feeling OK, that dysautonomia thing that I went through 2016 through 2018 was a complex passage through “What am I gonna do?” But I started practicing a mental affirmation. For most of that two-year period, if I ran into you, our conversation would start with me telling you what was going on. What I finally I realized was that’s my narrative. I had to change my narrative. So, if I’d have run into you, I would say, “I’m doing good.” I went back and had the dysautonomia test again and it was negative. It’s hard to break that narrative… In my case, it wasn’t as degenerative as it could have been. Everything that they tried to do medically to help me, especially blood pressure medicine, the side effects of blood pressure medicine almost killed me. Because I didn’t have high blood pressure, I had this thing called labile hypertension. In 2017, 2018, I was in the emergency room on the road six different times.

Another recent medical event you experienced inspired the song “Transient Global Amnesia Blues.” Because the condition affects the memory, how much of that do you remember?
Here’s what happened. There’s a two-and-a-half mile loop [on the property] here. I walk it a lot. I came in to make tea and get ready to arrange a couple of songs and suddenly I was gone. Claudia says I walked [points] over there as she was coming this way and I said, “I’m not me anymore.” She threw me in the car and I woke up in the emergency room. The diagnosis was transient global amnesia. So, they kept me overnight in the hospital and I realized my brain was kind of psychedelic. Kind of like taking acid.

I had asked Claudia to bring my notebook to the hospital and the next morning I woke up and turned on my phone, my daughter sent me a photograph of a sunflower growing on a piece of driftwood on the Thames River. I saw that photograph and just started writing page after page of stuff, about eight pages in this notebook. I put it in the computer to edit it and condense it down and that’s how it happened. I think the reason my daughter sent the photograph to me, this was on October 9, 2020, which would have been John Lennon’s 80th birthday, and I was growing sunflowers out in the back. There are some pretty tall sunflowers out there.